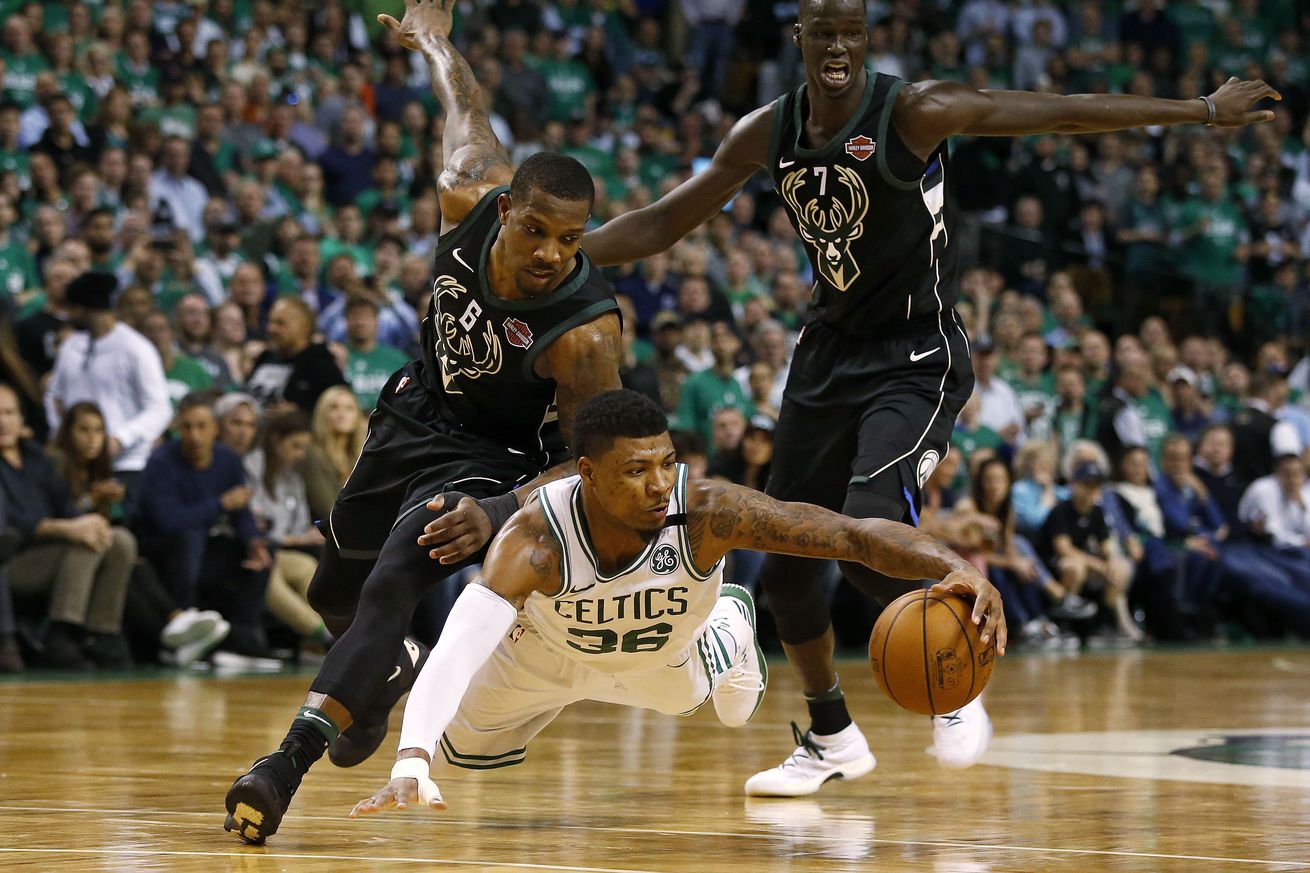 Smart could play a key role in resetting Boston’s culture next season.

When Danny Ainge dealt Paul Pierce and Kevin Garnett six years ago, it created a leadership void in the franchise. Pierce had carried the mantle for fifteen seasons in Boston. Garnett infused his gritty attitude and made them instant championship contenders. In one single trade, they were gone.

Since Brad Stevens’s arrival, he’s never named an official team captain. Stevens said last season, “I’d say out of the 12 years that I’ve been a head coach we’ve rarely had them [captains]. And the reason being is that you want to empower everyone to add leadership within their own authentic way.”

That didn’t happen with the 2018-2019 team and now that the team is heading towards what looks like an off-season of more tectonic change. One player has survived the last five summers unmoved: Marcus Smart. Last night, Smart was given the NBA’s Hustle Award:

On a per minute basis, Smart ranks in the top six among guards in Deflections (1st), Offensive Box Outs (1st), Defensive Box Outs (2nd), Charges Drawn (6th) and Contested Shots (6th). His Deflections rank 3rd overall – which helped him finish sixth in the league in Steals this past season – and he also rankings in the top 20 among all players in Charges Drawn (13th) and Points Per Screen Assist (17th).

As noted by the site, hustle stats have only been recorded since the 2016 NBA Playoffs, but Celtics fans are quite familiar with Smart’s hustle and “winning plays.” The 6th pick in the 2014 draft has lead by example in his five seasons in Boston and most recently become a commanding voice in the locker room. Even though his restricted free agency last summer got a little dicey at times, after he signed his four-year, $52 million contract, one thing was perfectly clear. “I love Boston and Boston loves me,” Smart said.

The city has a type and certainly, Danny Ainge has a type. Whenever he’s offered long-term deals to players during this revuild, those players have been culture setters. In 2014, Avery Bradley inked a 4-year, $32 million deal. Jae Crowder signed a 5-year, $35 million deal on July 1st, 2015. Al Horford and Gordon Hayward would follow suit in subsequent summers as max free agents looking to build on the franchise’s foundation. And last year, it was Smart.

In the wake of rumors that Kyrie Irving will be joining one of the New York teams in free agency and Al Horford could potentially cash in on one last big contract, Ainge and the Celtics find themselves at a crossroads, but with a familiar path ahead of them. We’ve seen them already make their first steps in last week’s draft, picking high character, low maintenance kids in Romeo Langford, Grant Williams, Carsen Edwards, and Tremont Waters.

In the rookies’ introductory press conference on Monday, Ainge said, “I think it just makes life more enjoyable when everybody is humble, hard-working and will play any role they have to to help the team succeed. You do have to have a certain amount of talent to win as we all know, but good people makes coming to work more fun.” Several pundits took that as shade directed at Irving, but it’s also an encapsulation of the type of player that the Celtics’ front office has targeted of late.

With their potential cap space, Boston could target D’Angelo Russell, the flashy Nets point guard who seems more Irving or Smart. Or, they could out price Milwaukee for Malcolm Brogdon, the hard nosed guard that turned a second round selection into a Rookie of the Year season. They could also try to fill Horford and Aron Baynes’ departures with Nikola Vucevic, the Magic center who blossomed into a first time All Star. Or, there’s rumblings that the Celtics could trade for the rough-and-ready Steven Adams. With “team culture” and a “winning atmosphere” seemingly on the minds of Boston’s brass, the decisions seem obvious.

With all the hand-wringing about Anthony Davis not wanting to play in Boston, the Celtics now seem determined to turn themselves into a team that maybe some players don’t want to play for, but teams definitely don’t want to play against. It starts with resetting the team culture in Boston. At his YounGameChanger basketball camp yesterday, Smart said, “It doesn’t have to be scoring 30 points a game. It doesn’t have to be jumping out of the gym. You don’t have to be the fastest. It’s the little things that you can control — like hustling — and that’s what we try to teach them.” That’s great advice for the kids at his YGC camp and frankly, his teammates next fall.