ALEXANDRE LANDRY AS PIERRE-PAUL IN THE FALL OF THE AMERICAN EMPIRE (2018).

It’s preferential, and perhaps biased, of me to feel that philosophical themes that run concurrent with the primary marketed plot of a movie usually tinge it with an overall “bleh” aftertaste. And before you say it, I know. A lot of great movies prosper in these conversational tangents that allegedly build into a metaphorical grandeur of the characters and situation. And sure, when it all comes together, the deeper meaning can really slap.

But I can’t stand in front of the class with a solid criteria of why I enjoy NBC’s The Good Place,a show that regurgitates bullet points from a Philosophy 101 syllabus for each episodic crisis, and why I sorta feel nauseated when I associate fly fishing and Stellan Skarsgård’s O-face (obvious variables related to director, genre, and shock factors excluded). The biblical raining frogs in Magnolia? Nah. Absolute unit of a moon planet in Melancholia? Sure, I’ll give von Trier a point for that.

I have a complicated relationship with allegory, and so it should come as no surprise that I couldn’t find myself to lend any positive emotion towards The Fall of the American Empire‘s main protagonist Pierre-Paul (Alexandre Landry), a courier who has a PhD in philosophy. The opening scene certainly doesn’t do any favors, as he laments to his soon-to-be-ex-girlfriend that intelligence is a “handicap” and the world favors imbeciles and cretins. It similarly vibes with The Social Network, where Mark Zuckerberg is rightfully told off by his also soon-to-be-ex-girlfriend for being an asshole (I should asterisk this by saying that it’s a fictionalized version, performed by the actor whose awful 2014 interview has proven his placement for the role). It’s not very easy to root for the guy who is Too Smart and cites Marcus Aurelius. 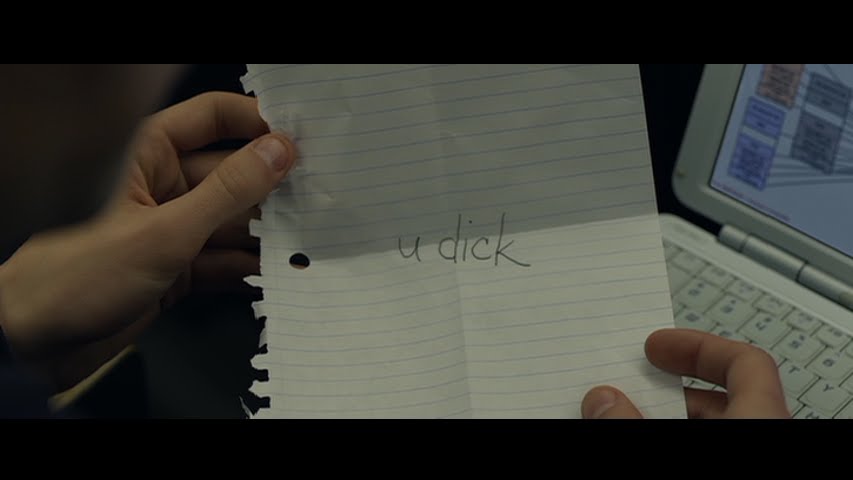 ME TO PIERRE-PAUL. COURTESY OF THE SOCIAL NETWORK (2010).

But wait – he’s a good guy that we’re supposed to unequivocally root for. It’s fair to assume that he’s not making much on that daytime delivery wages, but at any rate, we see that he spares his change to the homeless whenever he can and volunteers at the kitchen during his free time. Though he doesn’t become a CEO of a multi-billion-dollar company, Pierre-Paul stumbles upon two full bags of cash after an attempted robbery goes haywire and stashes it in his delivery van before the police arrive. We are then led to believe that his justification in jacking all of the money is for the greater good – especially when one of his first big-money purchases is spending about five minutes with a high-end escort (Maripier Morin), who goes by the name of Aspasie, the “first great whore” and friend of Socrates. Then, for the majority of the movie, we watch Pierre-Paul struggle with doing criminal activity without seeing himself as a criminal.

Stepping back for a second, let it be known that director Denys Arcand released The Decline of the American Empire over thirty years ago, where it opens with the idea that we are so consumed with pursuing our own personal pleasures that it contributes to the overall slow destruction of society. Both Decline and Fall are located in Montreal, which is close to the border of the hellscape that is the political and societal natures of the United States. If I were to put my two cents in on Arcand’s objective in releasing Fall, it seems to provide a renewed but familiar Canadian perspective on the “get rich or die trying” mantra that pushes the capitalist drive. It also seems to subtly indicate that the characters that speak English in addition to French (eg. the black robbers and the older, white CEO that helps launder Pierre-Paul’s money) represent the so-called American Empire, which seems to say something weird that I can’t still place a finger on yet.

The Fall of the American Empire may have been/could have been a piece that requires the viewer to remove themselves from their feelings and general reaction of Arcand’s perception of the “cold, hard truth.” I’ve assisted in the experience when I’ve blanked out at the times where Pierre-Paul too has blanked out for coherent answers during the detectives’ interrogations. He is a bumbling fool, and his desire for Aspasie to abandon her sex career because of her potential love for him is such a MAN WITH ANGST characteristic to include in a script. But there’s something detrimental, in ways more than just the storytelling, when a male-inserted line where the female detective, presumed to be gay, makes sure to tell her male detective that she’d want him in her bed again. “Pro sports are the mental illness of politicians,” one character says with a convicted importance that’s almost laughable.

When the American Empire does finish falling, I hope Arcand learns how to let it land gracefully.