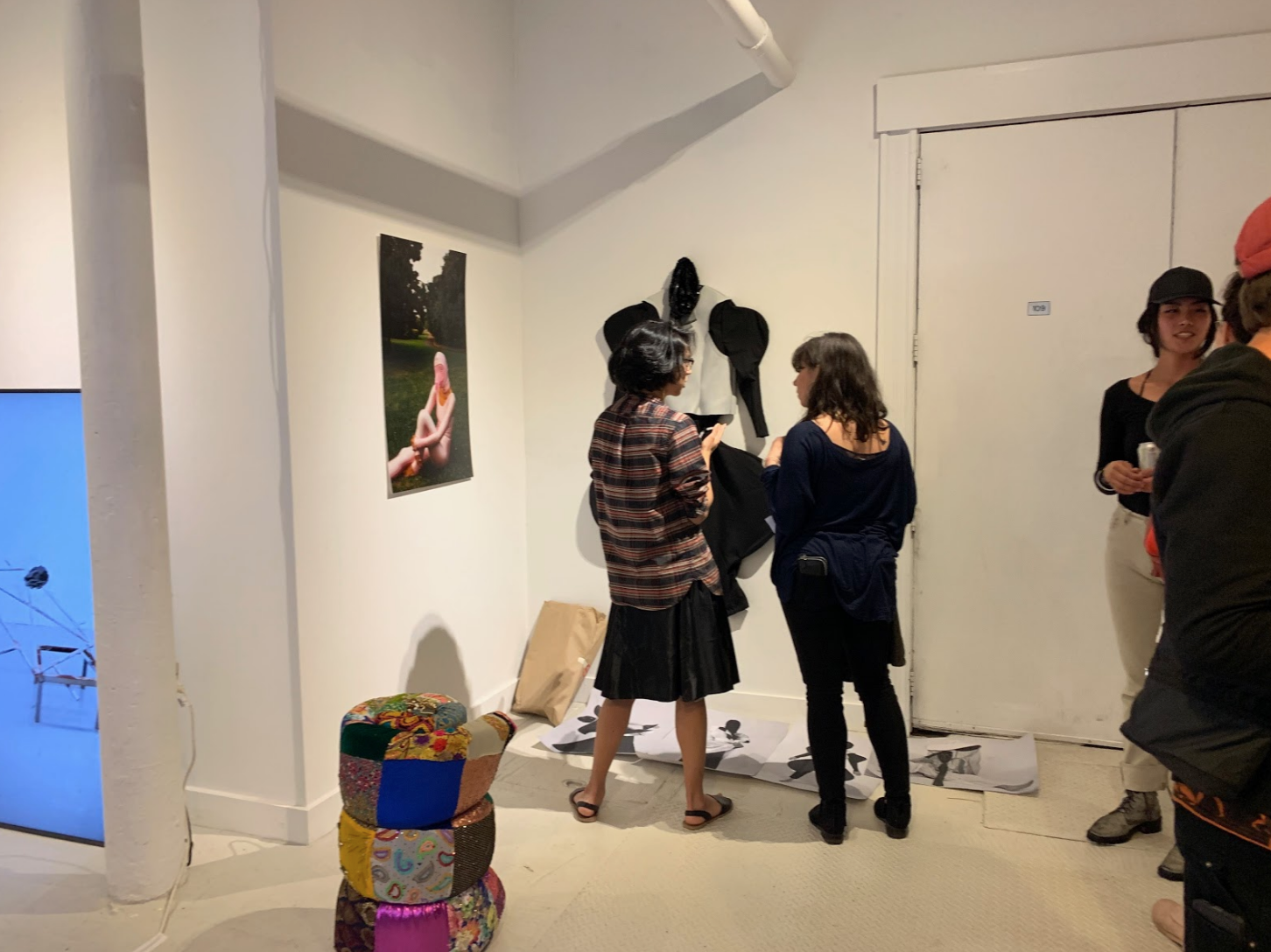 Artmaking is a means of storytelling; artists play a role as storytellers. The narratives we know and choose to tell through art, no matter how explicitly or abstractly, are direct byproducts of our culture, background, and the communities and belief systems we align ourselves with. Other more immediate factors, like our environment, class, age, race, occupation, and sexual and gender identities, tend to determine our personal stories, how we tell them and how others perceive them. Combined, these influences cause an individual to fabricate and adhere to a certain value system, so that even when they listen to or watch someone else’s story, they choose which details to absorb and ignore. What I’m saying is that storytelling in all its forms is an inherently biased practice, informing both our subjective and collective realities. How curious it is, then, that the diversity of society (i.e., all of its stories) most often gives way to a singular dominant narrative; be it for reasons of practicality, or discrimination, or, selfishness, etc? And before I slip too far into generalizations…

These are the kinds of musings about stories, identities, and realities that You Must Not Stand in One Place powerfully provokes. A multimedia group exhibition on view at Distillery Gallery (516 East 2nd Street, South Boston) until July 26, 2019, its title appropriates the Igbo saying (a group of people from southeastern Nigeria) famously recited by Nigerian novelist/poet and Igbo chieftain, Chinua Achebe. This excerpt from a 1994 interview with The Paris Review helps me feel the full impact of the phrase:

…I believe in the complexity of the human story and that there’s no way you can tell that story in one way and say, This is it. Always there will be someone who can tell it differently depending on where they are standing; the same person telling the story will tell it differently. I think of that masquerade in Igbo festivals that dances in the public arena. The Igbo people say, If you want to see it well, you must not stand in one place. The masquerade is moving through this big arena. Dancing. If you’re rooted to a spot, you miss a lot of the grace. So you keep moving, and this is the way I think the world’s stories should be told—from many different perspectives.

Couldn’t we all use a taste of this mentality in our current world? You Must Not Stand in One Place expands upon this crucial stance of empathy, exhibiting a rigorous variety of artistic perspectives that “tap into alternative worlds by creating grand and radical metanarratives of society.” The variety extends to the show’s media—painting, sculpture, film/video, fashion, and more—and range of conceptual approaches exhibited, so that there is something for everyone to love, connect with, and consider. In fact, the variety of the show is so impressive that it is equally overwhelming (and this is really my only critique)– it’s definitely not a show to be rushed through. It was of the utmost importance for curators Sopeak Sam and Melissa Teng to unite artists of different circles, practices, identities, and career stages (emerging and established) and attempt to equally distribute the opportunity for exhibition. “It was really important for us to work with artists who didn’t just create to raise awareness or ‘start a conversation’ around an issue, but who created work that took a political position and moved discourse forward by proposing ‘movement’ of some sort — whether through humor, a future scenario, reimagining a medium, etc. I think it’s important to recognize the bravery of action in the face of often paralyzingly complex problems,” says co-curator Melissa Teng. 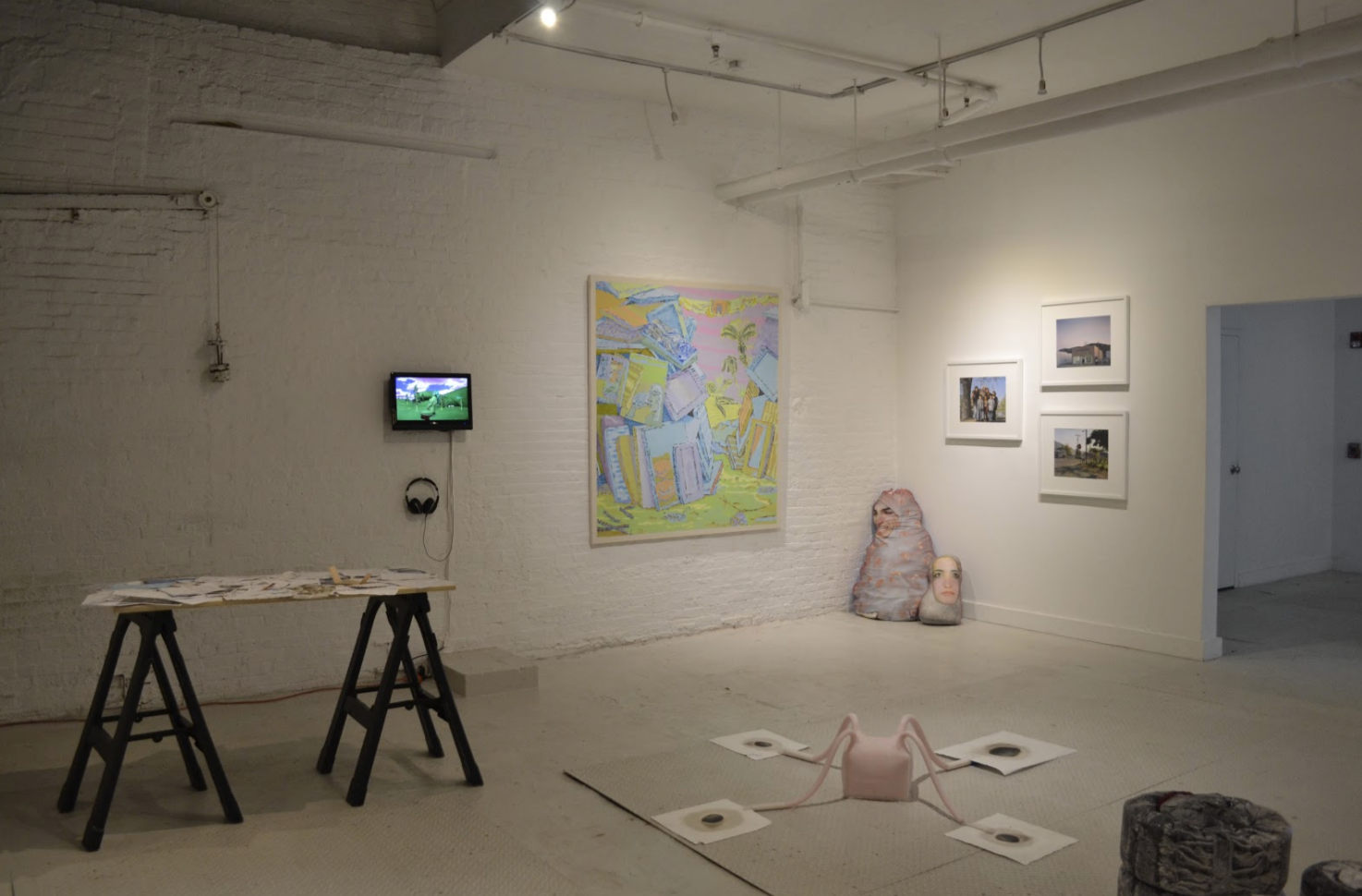 The artists featured tackle a number of relevant global concerns: everything from exposing/exploring social injustice, to grappling with environmental change and politics, to investigating their personal identities via memory and historical parallels. “Earlier on, it was [named] ‘alternate realities,’ says co-curator Sopheak Sam about the exhibition. “We were thinking about Afrofuturism and artists who work in that type of framework of world-building; artists who are looking to shift narratives, augment histories and speculate futures. For me it’s such an exciting theme that not a lot of exhibitions I’ve seen have touched upon, and definitely not many from the local gallery scene [in Boston].”  Indeed, You Must Not Stand is definitely one of the most inquisitive, cogent, and sincere exhibitions of art that I’ve encountered in a while. But if you approach this show with passivity, it won’t carry the same weight. You Must Not Stand excels as a forward-thinking exhibition because it asks a lot more of its viewers, compelling them to learn (and maybe do some research), empathize, speculate, and practice unbiased looking and listening. Contributing a media/tech design and academic research perspective to the exhibition, Melissa notes how “This show was really inspired by a branch of critical design called speculative design—creating work that is situated in a future and embedded with desired values that can be used to think critically about and shake up the present-day values ingrained in our everyday work and environments.”

Something that struck me about the show is its lack of wall labels (opting for a space map instead). The curators expressed their intent to keep the walls as “clean” as possible in light of how crowded the space can feel. I also find that omitting this immediately-available interpretive material serves the show quite well by liberating its artwork from any preconceived notions that may arise from a title or an artist’s name, and challenging viewers to judge the quality of the work based solely on the work itself. Brief text is provided only for the artwork where context is necessary, like for Keith Morris Washington’s RJ Tyrone: Pine Woods; Hattiesburg, Mississippi (2002). 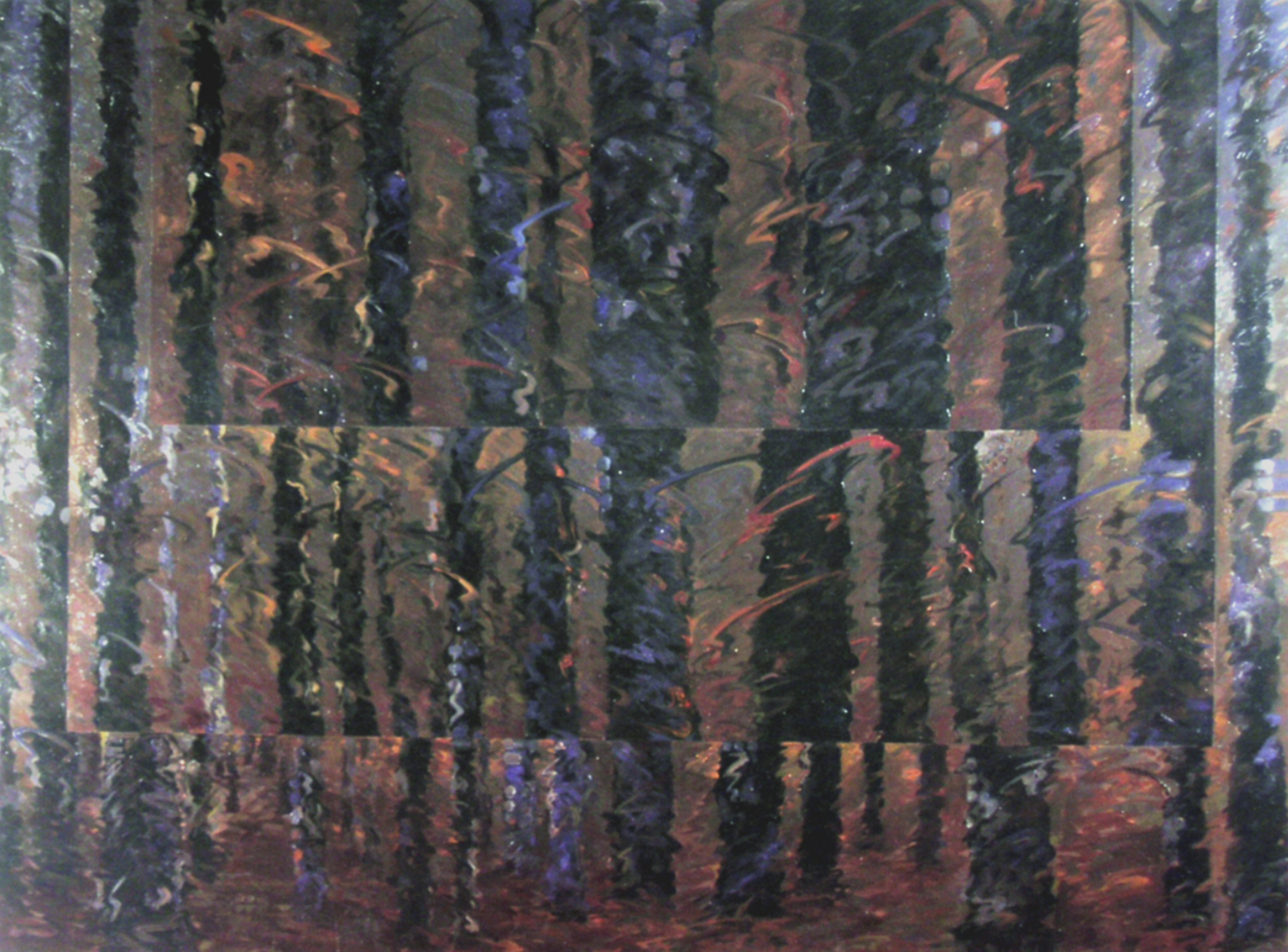 Oil on canvas, this painting references the fatal shooting of the 33-year-old black farmer from Lawrence County (MS), the brutality of which in the end was concealed with a suicide verdict. The wall text omits the year of the incident (1935) because for all we know, it could have taken place last week, as issues of white supremacy, targeted violence, and court verdicts with ulterior-motives still run rampant in this country. Washington explores the imagery of the woods where Tyrone was murdered as if he were a witness of the event now painting it from memory. Adopting a highly painterly approach, trees blur together with expressive strokes of color and convey a sense of haunting movement. The same forest is rendered from different perspectives within confined quadrants which overlap each other, embodying the monstrous cover-up of this tragic event and the subsequent wiping of RJ Tyrone’s story from history. Lina Maria Giraldo’s Identity Technology Storytelling (2017) also required interpretive text due to its existence as a larger project. As part of the City of Boston’s Artist in Residency (AIR) Program, Giraldo worked with members of the Hyde Park community at the Boston Center for Youth and Family to learn electronics and coding together. The community members then created poetry using code (so cool!) and built video cameras, which they then used to interview the Hyde Park Community and promote intergenerational dialogue and storytelling.“I am really happy to share work from Giraldo in this show because her art is so rooted in community-building and creating art with communities,” says Melissa. 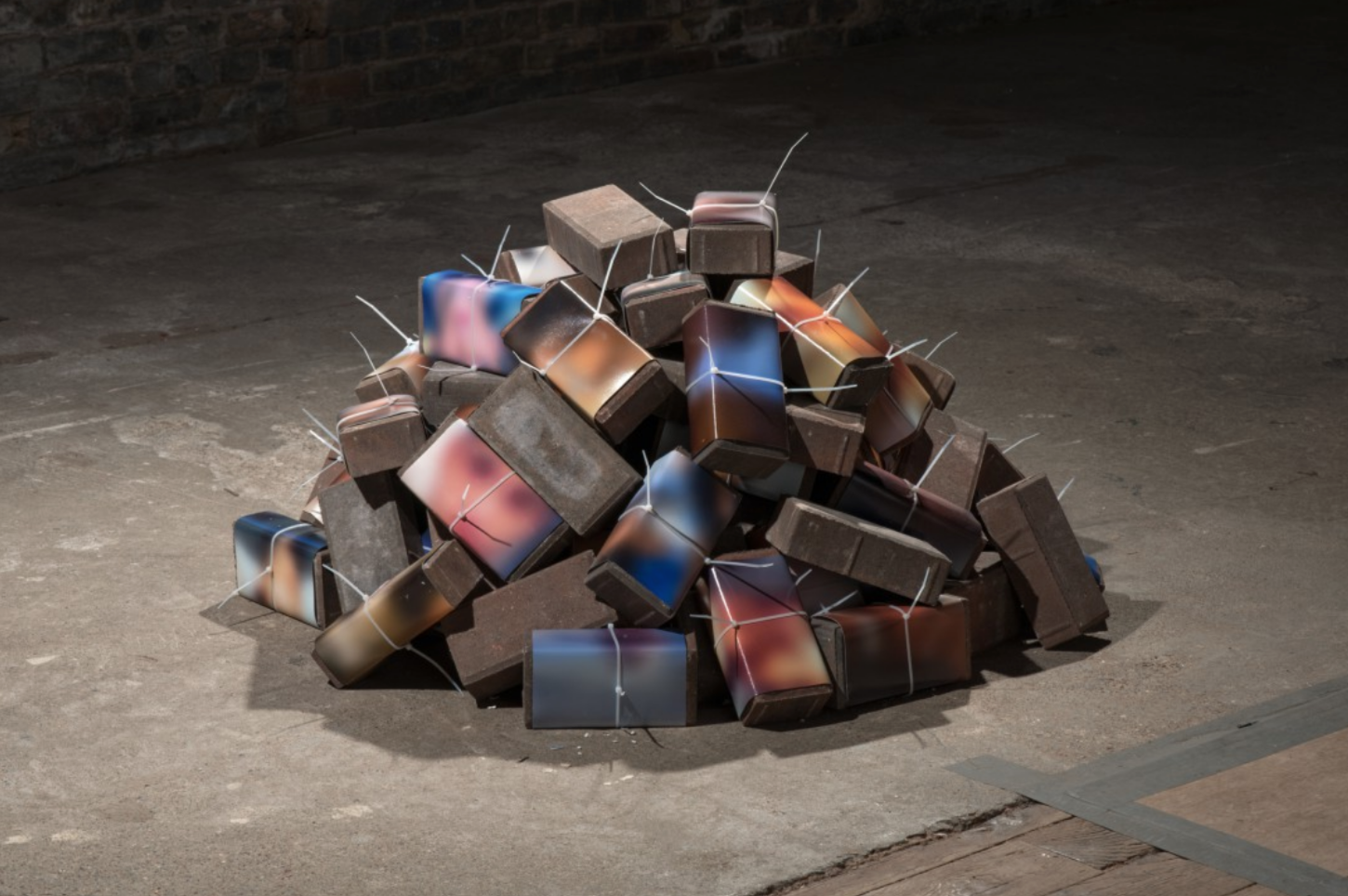 Ryan Aasen’s installation, NSA (2015), extracted from his larger series of the same title, deals broadly with “the intersecting politics of networking, surveillance, human rights, and global identity.” By “NSA,” Aasen means both The US National Security Agency and the phrase “no strings attached,” which means casual sex, and which is also emblematic of lack of “strings” or regulation of current NSA surveillance tactics. As much as we like to think we’re not being spied on by the government; to deny the idea of our private cell phone activity being fully accessible; this is exactly the kind of metadata that the NSA is rampantly collecting as they engage in cyber-warfare with other areas of the world like the Middle East. Aasen’s process was highly involved, using anonymous burners (prepaid mobile phones) in order to subvert surveillance and interact with men in these areas on Grindr and archive their conversations. With the same sensibility as NSA tactics, Aasen’s installation reduces these individuals to a pile of bricks; their Grindr profile picture is blurred, printed onto paper and fastened around each brick with a zip-tie (likely a dual-reference to consumer technology packaging and hand-cuffing). The headphones that dangle above the pile play a simultaneous mix of a human rights speech (co-curator Sopheak informs me that it is Hillary Clinton who’s speaking—probably to poke fun at her numerous cybersecurity failures) and obnoxious rave music. It’s an admittedly hilarious combination; often the current song’s “bass-drop” will coincide sardonically with a moment of climax in the speech. The drowning-out of the social justice speech with a party soundtrack evokes feelings of denial, phoniness, and insincerity, poking-fun at the idea of anyone ever actually protecting the rights of those oppressed. Aasen’s NSA installation brings a distinct tone to You Must Not Stand In One Place, effectively blending humor, fear, and rich socio-political commentary. 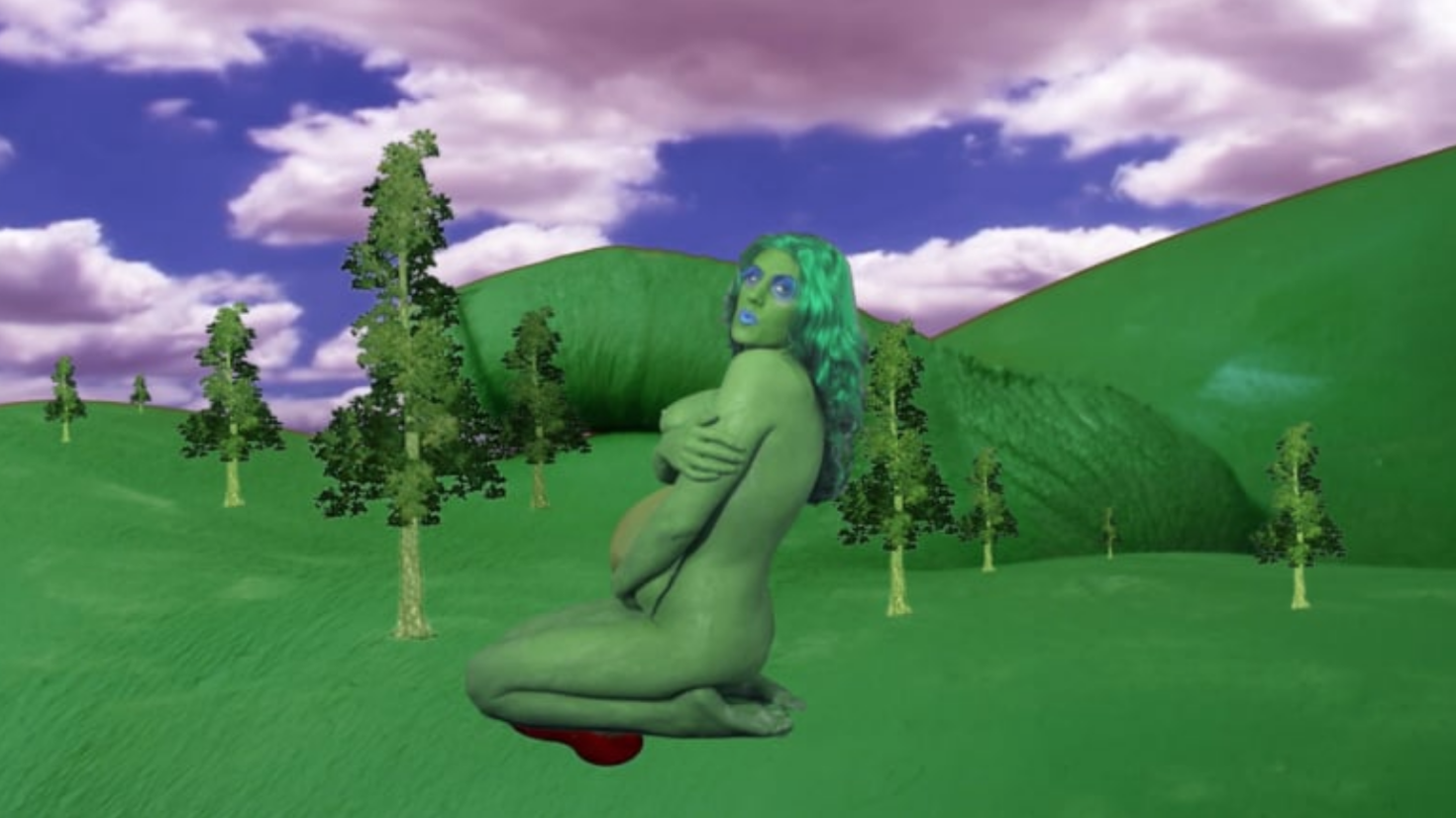 Nash Glynn’s video, PLEASE SAVE MY BABY (Lover Earth) (2016), functions both as a commentary on climate change and a self-portrait in which Glynn “explores the trans female form in relation to rapidly-changing, post-industrial ecologies.” Done-up in bright-green body paint and hair, sitting immovable at dead center and never breaking direct eye-contact with the viewer, Glynn’s character seems intent to hold our attention– though it is unclear if she intends to distract from, assimilate into, or emphasize the nearly-vacant, illusory landscape behind her. Look closer and these green hills sport a phallic image (literally), while Glynn’s frozen posture sardonically echoes a distinctly “feminine” pose as seen in classical paintings of the Madonna & Child or Venus. Perhaps this volatile juxtaposition evokes the reductiveness of the gender binary, calling to question who’s left out. As Glynn pleads the viewer to save her baby, there’s something about the tone of her voice that’s insincere and unconvincing. Artificiality is grossly prominent throughout the work: Glynn’s appearance, the fake chirping of birds, the flat green background, the “cardboard-cutout” trees, cotton-candy clouds, and Glynn’s muffled voice-recording, are all reflexive of the piece’s green-screen production aspect, eroding any sense of reality that may have been left in this world. In my interpretation, the piece seems to play-off of how we romanticize the drama of climate change without any call to action, hyping up the apocalypse yet in a state of blatant denial of the future– an attitude akin to Glynn’s character stating, “We will always have yesterday.” PLEASE SAVE MY BABY creates a profoundly interesting and uncomfortable space where “utopia and dystopia coexist,” as the artist herself states.

I mean it when I say that experiencing You Must Not Stand In One Place had a seriously positive effect on my own sense of global and personal consciousness. The show is designed to give people a comfortable and critical space to reflect upon their own identity and position in society, in order to 1) “overcome inertia and activate movement” and 2) “challenge what we can strive for in our current world.” Curated by two interdisciplinary artists, arts professionals, and overall passionate and hard-working individuals, You Must Not Stand marks Sopheak Sam and Melissa Teng’s first organization of a major exhibition. Due to limited funding, Sopheak and Melissa dipped generously into their own pockets to actualize their ambitions for the show, bringing these artworks/artists together and making these important conversations possible. I truly believe this was an amazing show and the curators deserve all the recognition!

The post WENT THERE: You Must Not Stand In One Place @ Distillery Gallery appeared first on BOSTON HASSLE.