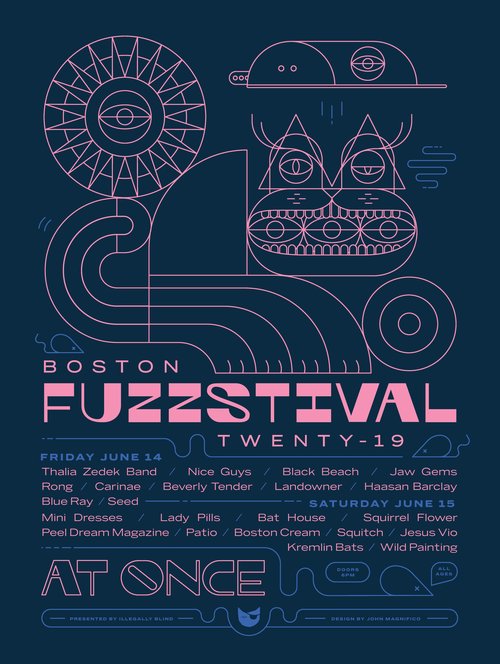 Illegally Blind’s Fuzzstival has been an annual tradition since 2013. At this event we celebrate everything extraordinary about the northeastern (mostly the Greater Boston Area) independent and alternative music scenes. The first band to kick off Fuzzstival 2019 was Seed Band. They combine emotional singing with post rock riffs and set the tone for the rest of the night. Next, with high energy, and comical stage antics, punk pair Blue Ray jerked and herked their way through a group of tunes.

More jerking, herking and maybe even some yerking came from Holyoke”s own, Landowner. Landowner’s split with Rong that came out last August is a banger and is not to be missed.

Next we go to Camp Blood who is currently making a splash on the Boston scene with their latest single Aerosol. Their beats were more experimental than the generic trap beats in most modern hip-hop. The music compliments their social and political message. To my knowledge, they are one of the few rap groups playing, which made them a standout, but also makes the fuzzstival goer question why more of the cities hip-hop scene was not present.

Carinae came out jamming. Their music is rock based, but with spacey wobbles and atmospheric effects. Their last song they played had more of a psychedelic-punk-goes-krautrock vibe. It felt as if each member of the group was able to fully express themselves and be present on stage. While they erred on a jam-band feel, the expressivity of musicianship is refreshing to see. Providence’s Beverly Tender make weirdo noise pop sound so sophisticated.

Last week I saw Thalia Zedek solo. Tonight she was joined by her whole band. I recognized a few of the songs from her solo set but they sounded much denser with the full band. If you have yet to see this Boston scene pillar perform with one of her many projects, it’s safe to say you have a dim idea of what Boston rock is all about.

Forward thinking punks Rong were all right with riffs and squeals. It is refreshing to see a band get better and better each time you see them. And that is true for Rong. Next, synth popsters, Jaw Gems performed instrumental bliss.

Closing out Friday night were two of our favorite punk bands Black Beach and Nice Guys. I haven’t seen Black Beach in over a year because they’ve been hard at work at new music. Their next album should be out within the year. They did a few brand new songs that I’d never heard before but sounded great. Illegally Blind Signees closed up the night with new classics and old favorites. It was funny when before and after they were playing this funny 5 second loop on repeat from Spin Doctors’ Two Princes.

Unfortunately I had to work Saturday and couldn’t make the 2nd day.

The post Went There: Fuzzstival 2019 Day 1 @ ONCE Ballroom appeared first on BOSTON HASSLE.