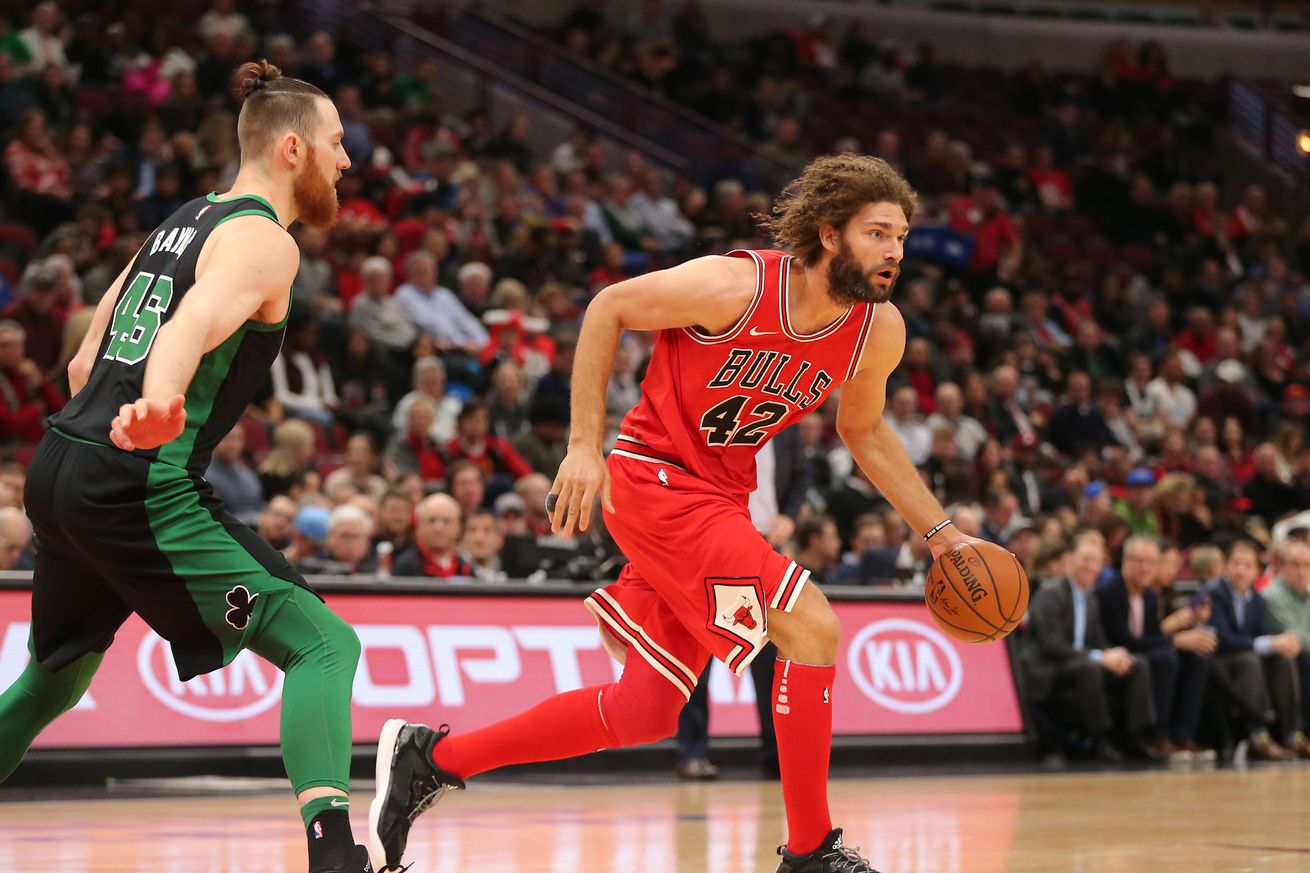 With Kemba Walker on board, the Celtics will need a reliable center on a cheap contract to fill out the roster.

As Kemba Walker boards his flight to Boston, the Celtics’ next priority will be finding depth at the center position. Lucky for us, a solid center is one of the cheapest commodities in today’s NBA. With multiple big men looking to explore the market as free agency opens on Sunday, Boston is once again poised for a summer drive-by rebuild. Per Shams Charania on The Athletic, the Celtics are pursuing bigs with their $4.8 million room exception, such as Enes Kanter and Kevon Looney.

While I’d expect both those guys to be out of Boston’s price range, they could still make a pitch to Robin Lopez, who’s spent the last three seasons with the Chicago Bulls. As a certified seven-foot screen-and-roll guy, he could fit into the Celtics’ system perfectly.

Lopez’s best season came in 2013-14, when he started all 82 games for the 54-28 Portland Trail Blazers. In 32 minutes per game, he posted 11 points, 8 rebounds, 1.7 blocks, a 128 offensive rating, and a 107 defensive rating. Ratings can be deceptive, as they’re more of a team stat than an individual stat, but it’s still evidence that Lopez was worth of a starting role on a strong Western Conference team. Since that season, he’s played one more year in Portland, one in New York, and three in Chicago, where many of his numbers have sagged across the board. Still, Lopez showed us what he can do when the eighth-seeded Bulls almost toppled the top-seed Celtics in the first round in 2017.

His 134 offensive rating for the series led Chicago by a mile. In 162 minutes, Lopez shot 34 of 52 from the field (team high 65 FG%). He tied Rajon Rondo and Jimmy Butler in VORP (0.2), was second in BPM (3.9, behind Rondo’s 8.1 in two games), and led the team in win shares per 48 minutes (.195). In short, Lopez was one of the three best players on a decent (at best) playoff team in a mediocre conference two years ago. Given Boston’s remaining summer budget, that sounds the best possible player we could get.

While most of Lopez’ offense comes near the rim, the Celtics’ track record of expanding the shooting range of bigs would almost certainly extend his offense to three-point range (e.g. Aron Baynes). Per Cleaning the Glass, Lopez averaged a career high 57.2 effective field goal percentage with 47% of his shots coming at the rim (very low for a big) and 41% coming from ‘short-mid’ (98th percentile among bigs). Here’s an example of how good his hands are when shooting from a few feet out:

And here he is putting Andre Drummond in the spin cycle:

With Horford out of the picture, the Celtics would lack a big with a collection of reliable post moves. While I trust the development of Robert and Grant Williams, the addition of Kemba will add some pressure for the team to be competitive in the short term again, so some assurance at center would be ideal until we’re sure the youth can take over (or not). Lopez is obviously not the passer that Horford is, but his assist percentage has jumped a bit in the past two seasons (8.4 last year, 11.9 the year before per Cleaning the Glass) while playing off Zach Lavine. In that system, you get a lot of nuggets like this:

And here’s a moving screen that I enjoyed:

Lopez was tied for 16th overall in screen assists with Steven Adams at 3.5 per game. Horford was 15th with 3.4. Many of Horford’s skills will not be replaceable, but the Celtics might be able to piece his production together through combining Lopez’ best traits along with incorporating a healthier Gordon Hayward in a more familiar role: playmaking.

While I wasn’t calling for addition by subtraction last year, I can admit now that I was definitely wrong in saying there weren’t too many cooks in the kitchen. Adding Kemba will inherently tighten the rotation as the Celtics will have to renounce all their free agents (except for Daniel Theis!) to make room for him. Nothing is guaranteed, but I’d be optimistic that everybody is at least comfortable in their role next season, even if expectations are lower. God have mercy on the Horford-less Celtics in the playoffs, though, where they’ll be in trouble if nobody fills that playmaking role. Lopez won’t raise Boston’s ceiling for title contention, but adding a proven playoff contributor can provide some needed stability if things get turbulent again.