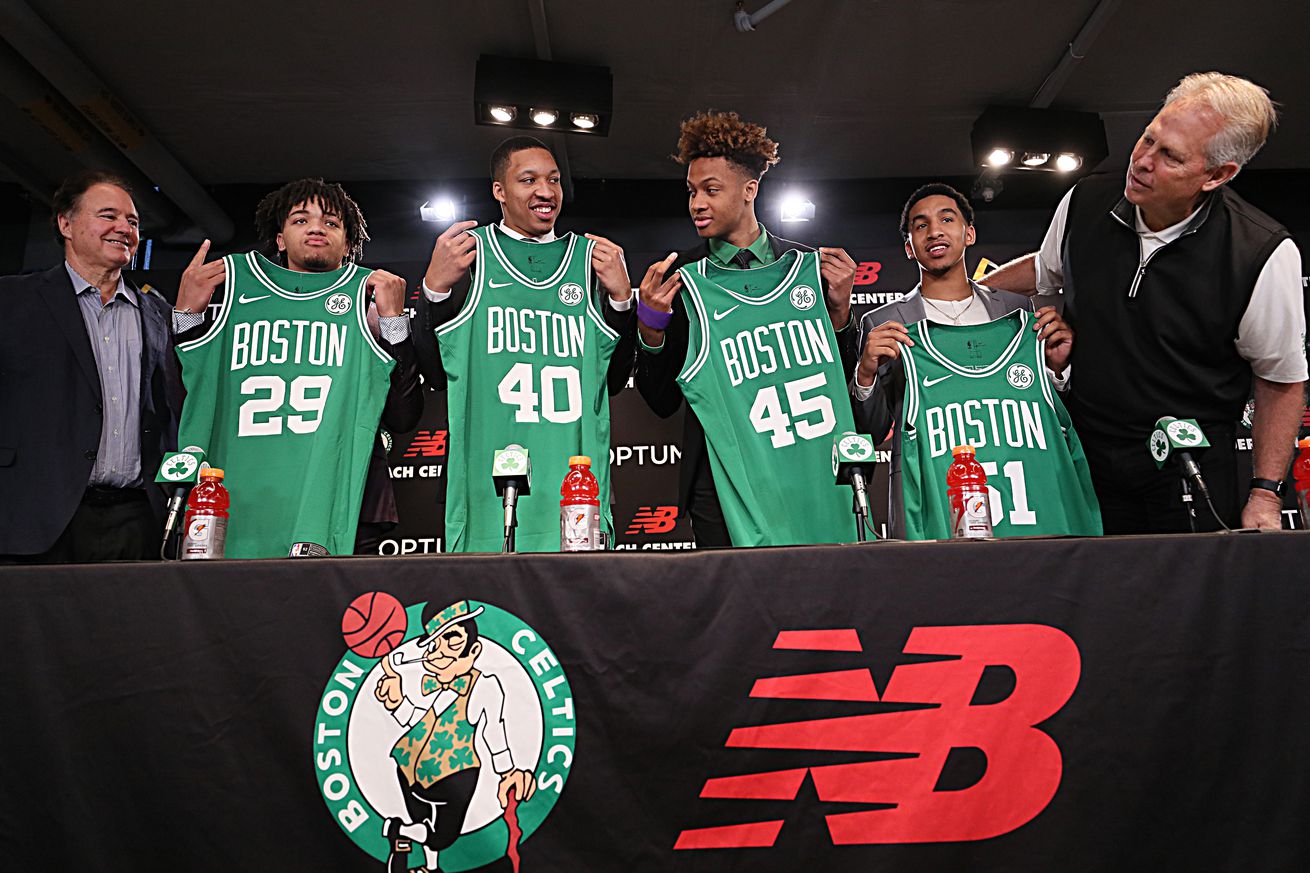 The Celtics must answer some difficult questions about their rotation for the upcoming season.

With the exception of the perpetually-in-limbo 15th roster spot, the 2019-20 Boston Celtics are just about set in stone. What’s done is done: Kyrie Irving and Al Horford are gone, and in come Kemba Walker, Enes Kanter and a cadre of exciting rookies. It’s time for the Celtics to look forward and formulate exactly what this new iteration of the roster will look like.

I believe it’s safe to assume that Kemba Walker, Jayson Tatum and Gordon Hayward are all locks for the starting lineup. They’re the highest paid and highest upside players on the roster, and the three players most likely to earn All-Star honors this season. How things stack up around them, however, remains a little unclear. Let’s break down a few lineup decisions that Brad Stevens and co. will need to address in the early going.

How will minutes be distributed among the rookies?

Brad Stevens will also be tasked with incorporating three notable rookies to his rotation right off the bat: Romeo Langford, Grant Williams, and Carsen Edwards. With the exception of Jayson Tatum in 2017, the Celtics have traditionally been a little slow to bring along their rookies in years past. They may not have that luxury this season.

Of the trio, Williams would seem to have the easiest route to regular minutes. The Celtics’ big man rotation is hazy at best, but more than that, there really aren’t many true fours on the roster. The starting lineup will probably feature Tatum as the nominal four, but behind him are only Williams and Semi Ojeleye. Factoring in his all-around game and potential ability to operate as a small-ball five, and something like 20 minutes per night doesn’t seem out of the question.

For the guards, Langford and Edwards, consistent roles are less assured. Walker’s minutes are a no-brainer, and regardless of who starts, Smart and Brown should be ticketed for 30 minutes per night, as well. That leaves little for the two rookies, and likely puts them in competition with each other (and the returning Brad Wanamaker) for the minutes that remain.

During Summer League, Edwards painted a clear picture of what he’ll bring to an NBA lineup: sheer, explosive scoring potential. As many have noted, he is a walking bucket. He’s endlessly confident and can pull up for a triple from just about anywhere on the court. It won’t take him long to establish himself as a microwave scorer in the mold of Lou Williams. Despite being undersized, there’s reason to believe he might be at least a neutral defender, if not a good one, thanks to his lower body strength.

Don’t forget about Langford, however. He may have fallen out of the spotlight in all the summer excitement, as he sat out the proceedings while recovering from thumb surgery, but he was the Celtics’ first pick in the draft for a reason. He has excellent size for an NBA two-guard at 6’6” with a 6’10” wingspan, and he’s a dynamic scorer who can get to the rim and the free throw line nearly at will. The three-point shot is the major question mark here: he didn’t shoot well in his lone season at Indiana, but he played the whole year with the shooting thumb injury he’s now recovering from. When fully healthy, will he be able to knock down threes at a more acceptable rate?

I would expect Williams to find a decent role off the bench fairly quickly. When it comes to Langford and Edwards, however, I suspect the Celtics will opt to bring Langford along slowly as he returns from injury, leaving more early opportunities for Edwards as a bench guard. His ball-handling and off-ball shooting should allow him to slide in at either guard spot offensively, and he could provide some scoring juice.