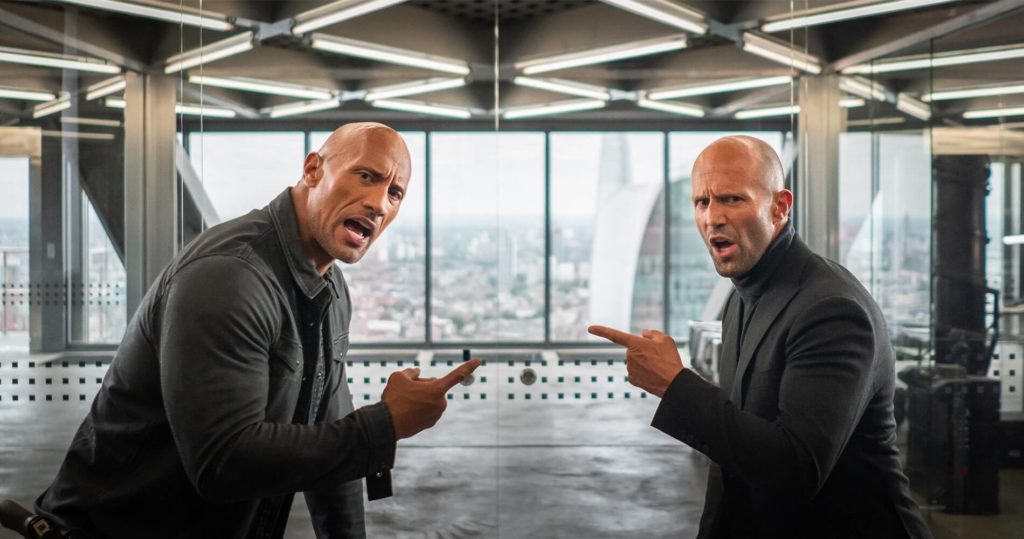 After eight films in the Fast & Furious franchise, director David Leitch (Deadpool 2, Atomic Blonde) introduces the first spin-off into the series, Fast & Furious Presents: Hobbs & Shaw. Featuring Dwayne Johnson and Jason Statham as Luke Hobbs and Deckard Shaw, respectively, the film tries to ride off the success of the unlikely duo from the last two installments. To put this into some context, Luke Hobbs is one of the villains from Fast Five, and Deckard Shaw is the villain from Furious 7, who’s also the brother of the villain from Fast & Furious 6. They both team up with the rest of the Fast & Furious Family in Fate of the Furious, but still are at odds with each other. With all that out of the way, their on screen presence spawned this spin-off, to some controversy. Following along? 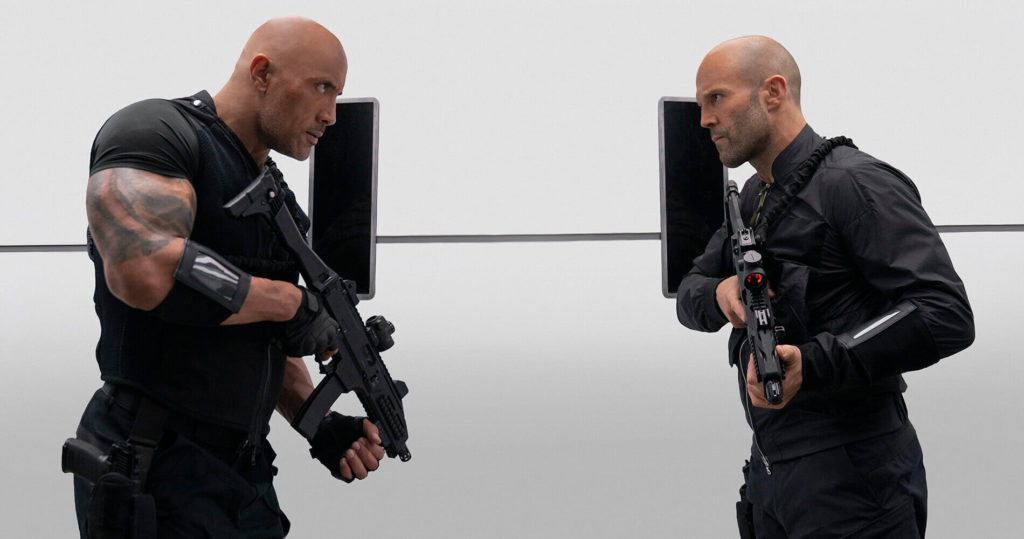 The story and action kick right off. MI6 agent Hattie Shaw (Vanessa Kirby), who also happens to be Deckard’s estranged sister, leads a mission to retrieve a super virus capable of wiping out millions. The mission gets interrupted by Brixton (Idris Elba), a cyber-genetically enhanced soldier, who tries to snag the virus for himself. Hattie manages to get the virus, but has the capsules injected into her. After going off the grid, Hobbs and Shaw reluctantly get tasked with finding her and securing the virus. Shaw has a history with Brixton, leaving room to build the Fast & Furious lore. Brixton works for Eteon, a high-tech company led by a higher power capable of controlling the fate of the world. Brixton asked Shaw to join Eteon once before, which left Brixton with three bullets in him, creating the part-machine he is today. The higher power super intelligence computer voice claims to also have a history with Hobbs. 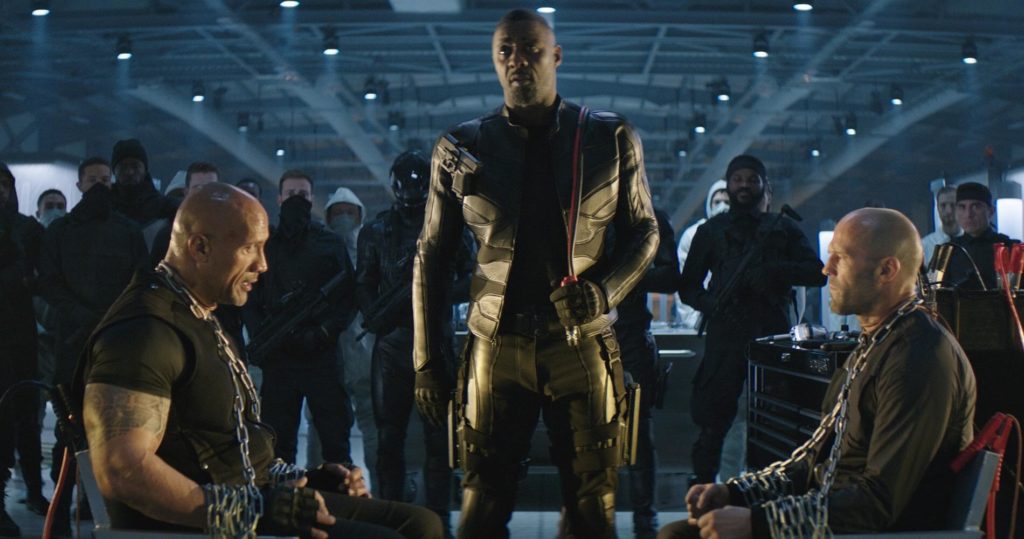 The majority of the story takes Hobbs and both Shaws across the world trying to secure the virus and stop Brixton in 42 hours. The depth of the locations gives opportunity for some amazing set-pieces, in particular on Samoa. Leitch is not unfamiliar with well choreographed action and creative fight weapons – in this case, a champagne bottle. That’s where the majority of the joy comes from. All the chase sequences and fights are a spectacle to see, with incredible stunts. Vanessa Kirby shines in the action sequences, and there’s a recurring joke that’s a highlight. Johnson and Statham seem to be having a blast, and the presence on screen is there, but a little held back. It almost feels like the brand is holding these two back.

The story could exist in a vacuum. Hobbs and Shaw are distant enough from their original introduction that they’re basically new characters. What’s more frustrating is that the story has to follow some guidelines, instead of taking to the strength of the two performers. There’s a great scene in the introduction that uses a split screen and lighting to show the difference in personalities of Hobbs and Shaw. There’s a scene in the middle where they each take a different door leading to a room with a clear window in between, and they showboat against each other of their skill in fighting. This type of stylized humor and visual finesse gives a hint to a film that this could have been. Unfortunately, there’s too much focus on juvenile humor, making this action comedy feel more like a farce than a breath of fresh air. 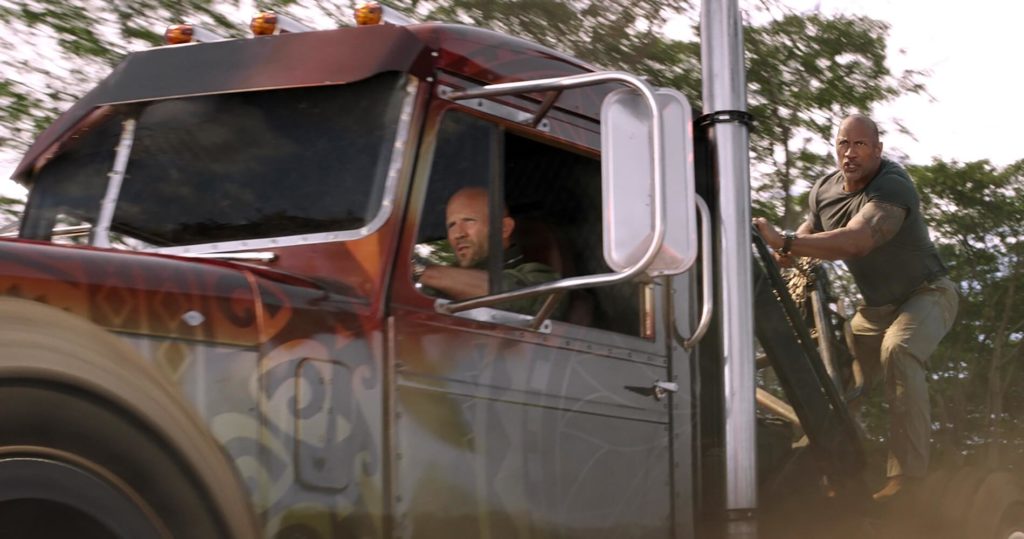 Even with some of the jokes not landing, and the story being fairly unoriginal, Hobbs & Shaw maintains the thematic elements of the franchise – family. Hobbs has an estranged brother a daughter who longs to know her family, and Shaw has his estranged sister. The film doesn’t take itself seriously enough to make me care about the family beats, and chooses to explain how they’re feeling rather than let the moment sit – one scene in particular with Statham shows some true emotion. At its worst, it’s a missed opportunity that shows glimpses of what could’ve been. At its best, it’s a decent entry with enough action, charisma, and well placed cameos to keep you entertained.