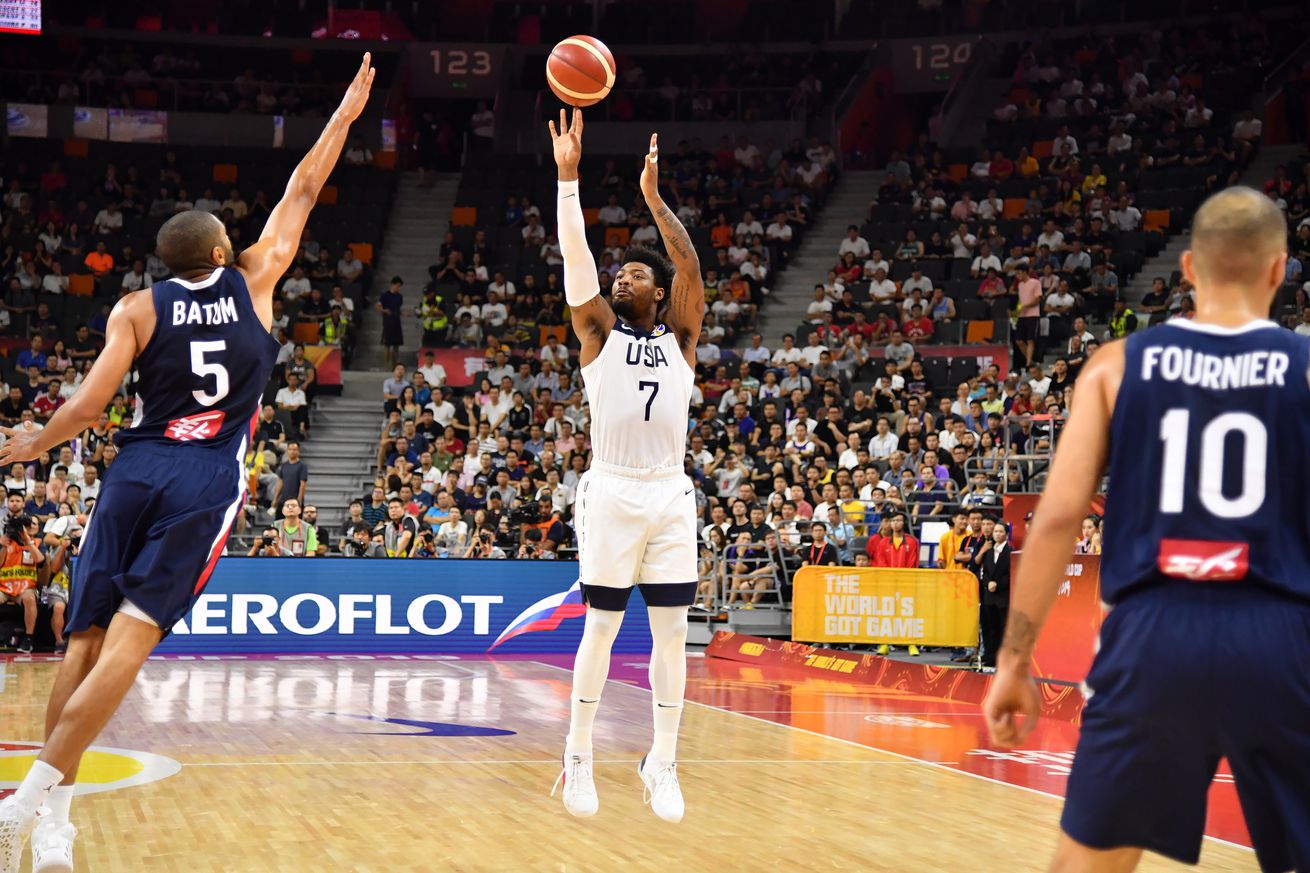 Walker struggled badly in this one with his worst game of the tournament.

Team USA faced a FIBA World Cup Quarter final matchup against a very tough France national team who narrowly lost to Australia on Monday and would ultimately provide USA it’s biggest test in the tournament to date. Jayson Tatum who was rumoured to be good to go for this clash, was in fact questionable at best:

Kemba Walker didn’t have the greatest start and had two quick turnovers succumbing to high ball pressure early. However, Marcus Smart busted in the game off the bench and hit his first three point attempt, like-wise Jaylen Brown was aggressive hitting on his first drive.

Coach Popovich has used Jaylen Brown in the frontline all tournament, alongside Harrison Barnes in a variety of small ball lineups, with Myles Turner a non factor in this game and Brook Lopez barely seeing the court, Brown has responded well and held his own defensively and rebounded well throughout. Brown (9 points, 4 rebounds) has displayed an eagerness to get into the lane all Summer and attack, and proved that willingness once again in this game also.

Jaylen Brown playing bully ball inside has been huge for USA all tournament long. Curious to see if that carries into the NBA season for him.

USA relied heavily on the shot making of Donovan Mitchell in the first half as he finished with 15 points as the USA went to the half 39-45. NBA players Frank Ntilikina, Evan Fournier, Rudy Gobert, Nando De Colo and Nicholas Batum are familiar faces and provided more than a tough matchup for Team USA. They were aggressive and carried over a level of intensity that forced USA into errors on both ends.

Walker who struggled all game picked up a third foul early in the the third quarter on a foolish high challenge on Ntilikina who was dribbling into nowhere. It took a pair of deep back-to-back threes from Donovan Mitchell and Khris Middleton to keep a respectable scoreline. Marcus Smart then got tangled with Rudy Gobert on a defensive rebound and then went down the other end to score on a tough and-1 attempt through contact. Mitchell started to get hot and Smart and Brown kept the USA locked in defensively against the Stifle Tower.

This run turned on Smart & Jaylen switching onto Gobert and fronting him hard and really pushing him out of his comfort zone. He’s been way too comfortable all game long

Smart’s defensive versatility has just been just as brilliant to watch, as he has switched onto larger players all tournament long and used his cobra-like body to expertly position larger opponents off the spot.

Smart has had a great and very Marcus Smart second half — deflections, tough post D on switches, a few no-hesitation takes, and huge ORB late 3Q to get Mitchell a big 3.

Smart however, missed 4 straight free throw attempts late in the game as Frank Ntilikina provided huge buckets down the stretch for France again and again. The USA was a mess late in the game attempting to attack Rudy Gobert who had a brilliant final term. In the end, the persevering French team would prevail as USA looks to a forthcoming clash outside of the top four against Serbia. A ton to dissect in the aftermath, but fundamentally too many of these Team USA players looked like they were along for the ride.

Kemba Walker’s had his first truly tough game of the tournament at a bad time. Marcus Smart missing four free throws didn’t help. Nor did Frankie Smokes hitting some nonsense from the wing.

USA got back in it with defense and driving and kicking to shooters.

In the fourth quarter, they chose to challenge Gobert repeatedly at the rim and it ended as you probably imagine.