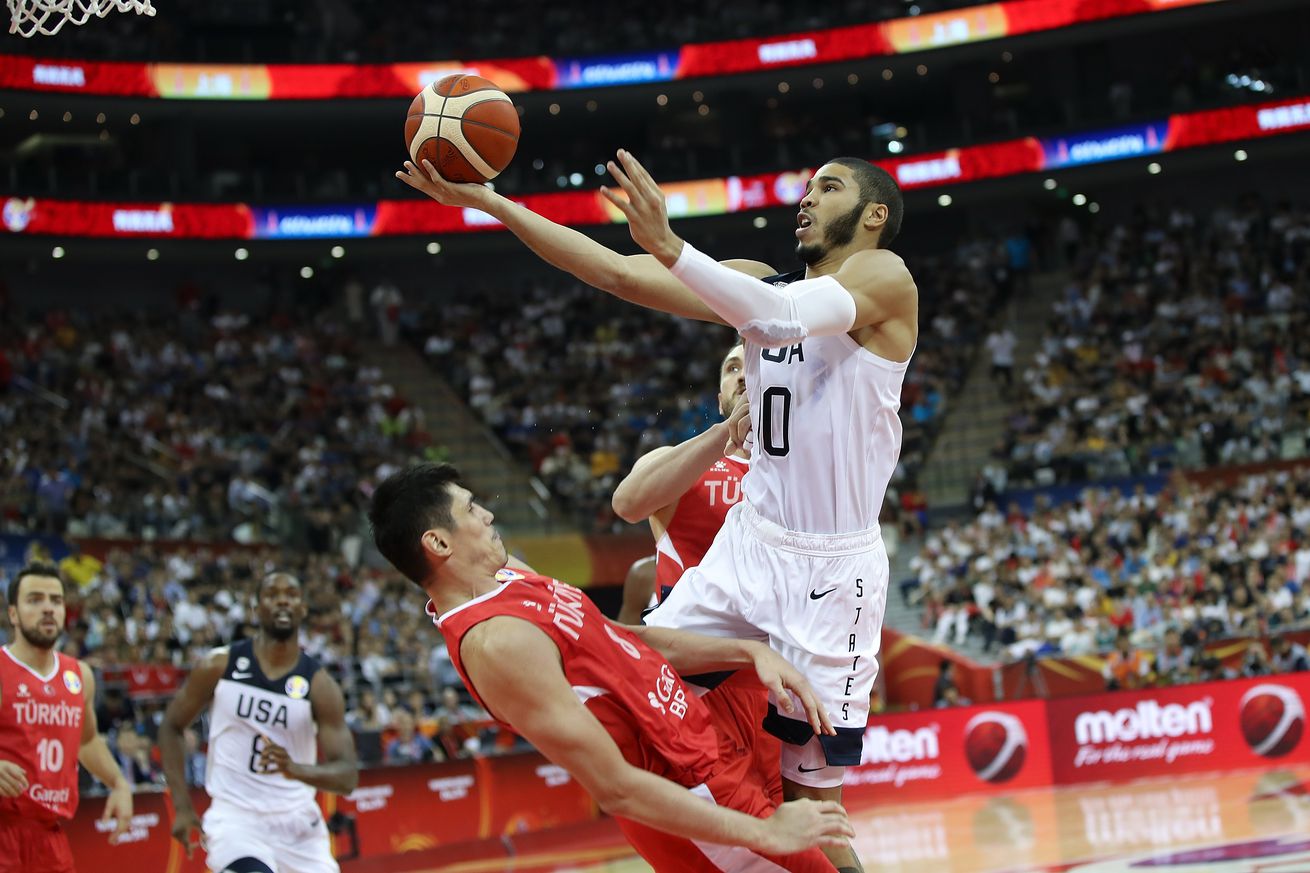 Jayson Tatum needs to become a more significant playmaker and power forward with Al Horford and Marcus Morris gone. He flexed both skills last week with Team USA before an ankle sprain eliminated him from the tournament.

David Epstein’s “Range” is making the rounds as the book of September. I haven’t read it yet, however its premise of “the great generalist” made me think of Jayson Tatum and Team USA. Tatum, dubbed a Hall-of-Famer off a great playoff run of scoring as a rookie, exited college as so much more.

Tatum rode the same scoring wave as the others at the tumultuous wing position last season; 34 points in 34 minutes became two points in 28 minutes two games later. That may not change in 2019-20 with Kemba Walker and the wings loaded again. Last week at least provided a view into Tatum’s broader shoulders and improvements, ones the Celtics need more than points from.

Tatum joined Walker to build Team USA’s core. They’ll double as the most important pair on the Celtics. Walker signed up for any usage necessary to win. New centers will perform duties more typical than Al Horford did. Tatum and the wings need to glue those two efforts together through secondary playmaking, rebounding, and seamless switching.

Tatum shot 3-for-11, then departed with an ankle injury during the closing sequence against Turkey last Tuesday. Nothing about his game signaled a 2019-20 All-Star nod, but it did show awareness of what he’ll need to capitalize on if he’s shooting poorly.

He hauled in 11 rebounds and halted possessions inside and out. The second-level passing that scouts saw at Duke shined, the same that made his supporters giddy when Danny Ainge dealt the Markelle Fultz pick. He flashed the transition shiftiness evident as a Blue Devil. When Tatum didn’t post-up or isolate then, his drives freed bigs on the baseline and allowed him 2.1 assists per game.

The pro game flows in layers. Here, Walker set the first penetration to open lanes for Tatum to play a two-man game with Myles Turner. All that happened in one sequence, and could repeat with Enes Kanter.

Tatum assumed facilitating roles late in the shot clock. His drives to the rim didn’t devastate the defense. They moved the zone enough to space the floor. The Celtics will see less zone, though its usage increased last year from the Nets and others.

The Celtics lost substantial production on both ends. Even if Tatum fills the gaps as a playmaker, he’s set to bridge what Marcus Morris vacated. Morris allowed Tatum and Jaylen Brown to focus on the finesse game by handling the filthiness of the four. Tatum, the tallest wing, will assume more defensive assignments around the rim and rebounding load.

He has comfortably used his length at this level to block roughly one shot per game. The more Boston can prevent its opponents from setting their defense, the more playmaking opportunities and points will funnel to Tatum like it did here following his stuff.

These little plays embody a complete player. Their refinement would exceed the impact of what four extra points per game would provide. The Celtics need offense, but their system finds the best shot without pressing shots. These plays determine what he can force, the way Marcus Smart routinely posts plus nights scoring less than 10 points.

It’s a shame Boston’s in little position to swing a trade for Myles Turner without sacrificing Tatum. The two flashed excellent chemistry in the two-man game, and Turner’s rim-protecting prowess would assist Tatum’s transition to the four. Their pairing has nonetheless exhibited Tatum’s ability to create on and off the ball.

Tatum leans heavily on his best moves in these aspects too though. He developed a hooking pass around defenders in the post to cutters on his drive. Much like his mid-range fadeaway off the dribble like Kobe Bryant, it produces spectacular plays that become predictable when repeated.

The Kobe comparison’s interesting because Bryant crafted this image of a star ruthlessly shooting his way to greatness. LeBron James — now in The Greatest Ever conversation — caught slack early in his career for “deferring.” Tatum showed that pressing last year at times, flailing his arms for calls, when the beauty of Brad Stevens’ system is that the best shots land on your doorstep in the flow of the game.

The transition game has saved Team USA through its glaring ruts on offense. While Brown will be the essential scoring force in that aspect, it also provides Tatum a chance to expand his scoring and facilitating. The greatest detriment to losing Horford falls in the half-court. The open floor game — especially after turnovers — should be ripe for picking in pace-and-space.

Basketball demands balance. This tournament showed the limitations of egalitarianism when only one person can plug the sinking boat. The US nearly lost to Turkey, after a ruptured last-second set barely received new life from Walker’s save out-of-bounds. A scramble landed in Tatum’s hands, and with over a decade of victories on the line he knew exactly what to do. His feet set behind the line and his hesitation drew three free throws. Tatum converted two, hit Khris Middleton in transition in the finals seconds and won USA the game.

Tatum exhibits the balance the Celtics will strike going forward. He’s too good to strictly catch-and-shoot off Walker. That approach took the ball from his hands in Game 7 two years ago. It’s also the best way to prevent 1-of-7 on Tuesday in January. That falls on Stevens, but Tatum did his parts in the other areas that’ll craft good nights (and wins) regardless of his percentage.