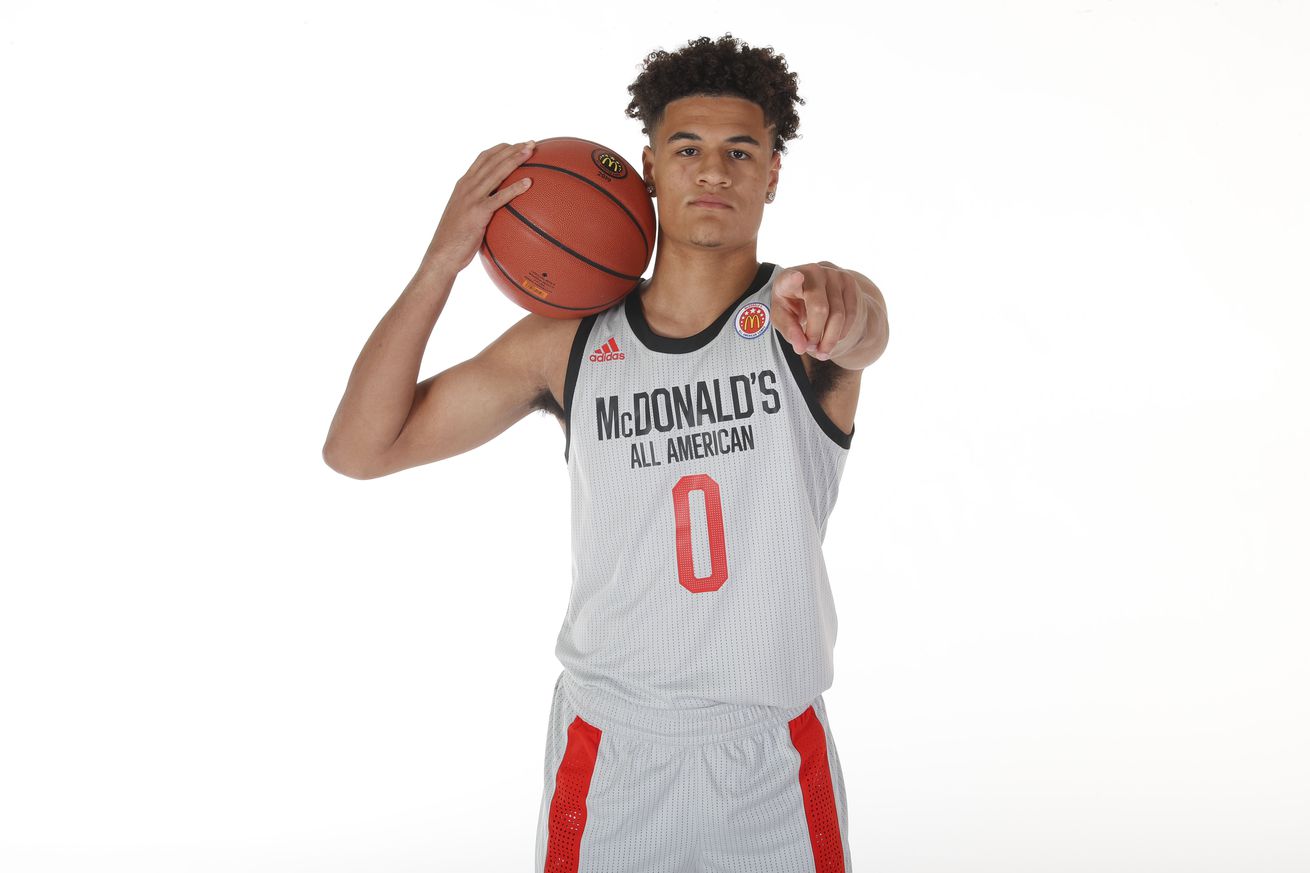 Max Carlin breaks down the top prospects in the 2020 NBA Draft and shares his first big board of the year.

College basketball is here and I am excited to share my first board for the 2020 NBA Draft. With as many as five picks spanning all ranges of the Draft, 2020 represents a year for Celtics fans to be especially attuned to the happenings of the world’s best young players outside of the NBA. Before the rankings, though, let’s go over some essential background information.

Prior to the 2019 Draft, I wrote a brief piece outlining my philosophies on the draft. I won’t re-litigate any of that here, but I’d recommend taking a quick look before diving into this year’s rankings. The one notable difference between that final evaluation and this preseason version is my willingness to be speculative. When it comes to considering outcomes, I’ll be placing greater weight on high-end outcomes, as there is simply more time to see if prospects can translate tantalizing tools to impact on basketball games.

As for general thoughts on the 2020 Draft, I consider it to be meaningfully weaker than 2019. The simple fact that there’s no Zion Williamson at the top hampers the class a lot, but where I saw the 10-20 range as such a massive strength in 2019, that range is quite weak in 2020. That said, the depth of initiators in 2020 is considerable, and I am a huge fan of the forward/wing depth extending well into the second round (a massive win for good teams needy at the NBA’s most cherished positional group). Due to the extraordinarily weak returning class, we could see record-setting numbers of one-and-dones in 2020.

Finally the 2020 class hits its stride as we reach my final tier. I’ve only ranked this group publicly to 60, but my estimate would be it extends comfortably past 100. This tier captures my favorite aspect of the 2020 Draft in the extensive forward/wing depth, but the quantity and quality of situational bigs and complementary guards deserves mention as well. This tier presents a massive opportunity for good teams to add much-needed depth at cost-controlled prices.

Green is an accomplished defender both on-ball and off, standing out with strong recognition and motor:

Nice defensive possession from Josh Green, rim rotation and recovering to someone in a scramble situation pic.twitter.com/dOvuTNFUjX

Offensively, his most appealing trait is passing, as he can be relief upon to make correct decisions, often executing them creatively and effectively:

Josh Green isn’t a special passer, but he’s a strong decision-maker with nice creativity on the move on plays developing in front of him pic.twitter.com/6kud5QIuwA

Wouldn’t call him graceful, but Josh Green’s got some funk pic.twitter.com/Rw5C1eL371

Shooting is Green’s most significant roadblock, and I’ll remain skeptical on him until he can prove competent enough to punish defenses and force the closeouts necessary to deploy his passing acumen.

The only freshmen in NCAA history to shoot 40+% on 270+ 3-point attempts are Steph Curry, Jamal Murray, and Isaiah Joe. But there’s more to Joe than just historic shooting. He is an ingenious relocator, a shockingly physical screener, a generally intelligent player:

Joe’s greatest weakness is…his weakness. Painfully skinny, Joe is a total non-threat as a slasher and is likely generates the least rim pressure I’ve ever seen from a guard:

Ultimately, though, Joe is a special shooter and more than just a gunner. He’ll have to bulk up a ton before he’s ready for NBA minutes, but it’s hard to see his skillset not playing in the league at some point (for more on Joe, read Cole Zwicker’s fantastic piece on the Arkansas sharpshooter here).

Jones is a special point-of-attack defender:

Tre Jones is a menace pic.twitter.com/TvhKjR82KO

At this stage, that’s only part of Jones’ game in which I feel confident. He’s careful with the ball and certainly a good passer, but I have no faith in him to pressure the defense with his scoring after posting a 48.5% true shooting on just 15.1% usage as a freshman. I worry also that Jones’ absurdly low turnover numbers (1.5 per game to 5.3 assists last year) indicate excessive cautiousness.

There is a real chance Jones has untapped scoring potential that was hidden on last year’s star-studded Duke team–he did, for instance, score well in AAU play back in 2017. That possibility keeps him comfortably in the first round for me right now, but Jones will have to prove his ability to pressure the defense as a scorer this year.

Sylla is an explosive and intelligent big who flashes perimeter skills. At this time, defense is his calling card, where he excels as a help defender, but he owns some interior skill on offense as well:

Questions stem from Sylla’s skinny frame, which enables opponents to bully him on the interior (though he often fight well with his length). Sylla’s projection relies largely upon how functional his perimeter skills prove to be. I buy value in his grab and go equity, but I’m not sure how much I can get behind his shooting or general offensive impact in the half court.

In AAU, Walker played as a big, allowing him to showcase his recognition and effort as an interior defender:

Solid touch on the PnR pass over the top by BJ Boston, but CJ Walker shuts it down with a strong rim rotation pic.twitter.com/dWX9E6xaQV

The role resulted in monster block numbers and highly efficient finishing, but in high school games he filled a very different role:

Cool to see three consecutive snug PnRs and Walker do something different each time pic.twitter.com/pp0GdwFW1D

Some creation from CJ Walker. Haven’t seen a ton of passing from him, but he seems to be aware of his impact on the defense and how to capitalize pic.twitter.com/FKji77JrCC

Playing as more of a ball-handling perimeter player, Walker demonstrated unusual handling coordination at his size, comfortability getting to his pull-up off the dribble, somewhat advanced reads as a passer, and admirable fire (he likes to dunk on people).

Transposing Walker’s different roles on to each other, you get an effective interior player with an elite motor who flashes serious perimeter skill. I want to make clear that those perimeter flashes are flashes–chiefly, the shot remains a serious question–but Walker’s combination of skills and physical traits I find highly intriguing.

Tillman is a defensive wrecking ball who will string together brilliant possessions of multiple rotations to completely shut down an opponent’s offense. Detractors will likely cite size as an impediment to Tillman’s viability as a big, but I always defer to the film, and Tillman continually beasted NBA centers:

Just kicking the absolute crap out of Bruno pic.twitter.com/OZSQ9Wf4k8

Strength remains among the most underappreciated physical tools, and Tillman has it at an elite level. To that strength, Tillman adds adequate mobility, possible shooting development, and considerable feel for the game:

Tillman may not be a starting big in the NBA, but I imagine coaches will find themselves gravitating toward the Michigan State big man in high-leverage situations due to his smarts and all-around game.

Mobley is perhaps best known as the older brother of Evan, a likely top-5 pick in the 2021 Draft, but Isaiah is a very compelling prospect in his own right. Distinctive of both Mobleys is outlier skill and intelligence in gargantuan human beings:

Really like this as an example of feel from Isaiah Mobley. Catches and immediately transitions into a hand off, using his body to create a great look for Juzang pic.twitter.com/aRdyBQypJe

Isaiah Mobley is the best pic.twitter.com/lXpjEZIfaW

With their AAU team, 6’10” Isaiah legitimately played point guard, and he acquitted himself well. For his size, he’s an exceptional ball-handler and passer. He projects well as a shooter, too, with sound mechanics and soft touch.

Physically, Isaiah is a mixed bag (this is where Evan sets himself apart). At times, he moves well enough, but he’s certainly not quick and lacks the bounce characteristic of the league’s best rim finishers and protectors. Isaiah compensates well with elite length, however:

I suspect Mobley might be a bit too limited to play huge minutes, but his skill, intelligence, and length should elevate him to the status of high-impact rotation big who actually carries significant value among the morass of forgettable bigs in today’s NBA.

Lewis is a stifling on-ball defender on the wing, though he’s very weak, so he might be more guard stopper than true wing dominator. He is also an absurd vertical leaper with a powerful motor that produces entrancing highlights:

So ummm Scottie Lewis does not believe in gravity pic.twitter.com/by0TkSmEzK

Virtually every other aspect of basketball is a major struggle for Lewis, however (he’s also quite old for his class). He’s a spacey off-ball defender who doesn’t impact team defense nearly enough, and his offensive decision-making is comically poor:

Just over one half of Scottie Lewis offensive highlights pic.twitter.com/HxS31Qdws7

Consistently high free throw shooting numbers and non-horrific mechanics render Lewis a solid bet to shoot, and his guard-stopping defense does have value. He’ll benefit from a scaled back role on a stacked Florida team that should more accurately reflect his NBA future as a 3&D specialist, but he’ll have to prove he can fit in as a cog.

Whitney is 6’7” and long, bouncy as heck, and appears relatively likely to shoot. I am not a proponent of the mode of analysis that lists off the three or four traits a prospect has and ignores how they come together to produce an effective basketball player. Doing so would lead one to massively overrate a toolsy prospect of Whitney’s ilk, because this is how it all comes together (check out both threads for some high comedy):

This is Kahlil Whitney pic.twitter.com/dsgkye0DGV

Not the highest level court awareness from Kahlil Whitney pic.twitter.com/F8v2ThQ9AG

Whitney’s decision-making is catastrophically horrid. His on-ball ability is further derailed by a complete inability to dribble, as he not only lacks advanced moves but routinely posts laugh out loud lowlights in which he dribbles off his own feet or simply trips into a defender.

But, he’s 6’7” and long, bouncy as heck, and appears relatively likely to shoot, and at some point those tools are worth something. To remain this high, Whitney will have to prove to me he can be helpful in a complementary role, but the tools are there.

As one of my favorite prospects in the class, Wheeler rounds out my top 30. Wheeler brings great size at a rangey 6’9”, which he couples with eye-popping bounce:

Smart cut by Wheeler with his man doubling the post. And the attempted murder pic.twitter.com/7khjcqskcF

By pairing those remarkable physical tools with solid recognition, consistent effort, and heady play, Wheeler generates value on the margins on both ends of the floor.

Wheeler’s NBA success will be a story of his shooting. On 2.4 3-point attempts per contest as a freshman, Wheeler connected at a respectable 36.5%, but his 61.3% from the free throw line leaves questions as to how real that success was. Yet Wheeler’s occasional flashes of shot versatility really excite me as to his potential as a valuable two-way wing/forward:

Wheeler must prove capable of thriving in a larger offensive role than he did during his limited but impactful freshman year, but at the moment he is one of the most overlooked prospects in the class.

This segment of Tier 4 is probably unrealistically heavy on underclassmen, but this is a notably weak returning class, and my willingness to be speculative plays a role. By June 2020, older players like Grant Riller (62nd) and Cassius Winston (65th) will most likely work their ways into my top 60, while names like Trent Forrest, Jay Huff, and Nojel Eastern are on my radar.

I’m also light on international talent here, which is a function of some guys, like Rokas Jokubaitis (64th), narrowly missing out, but also a reflection of my being slightly behind on the crop as I’ve focused on preparing for the college season. That said, I don’t believe I have any truly glaring omissions among international players. Some players I’ll be monitoring are Aleksej Pokusevski, Biram Faye, Nikita Mikhailovskii, and Maxime Carene among many others.