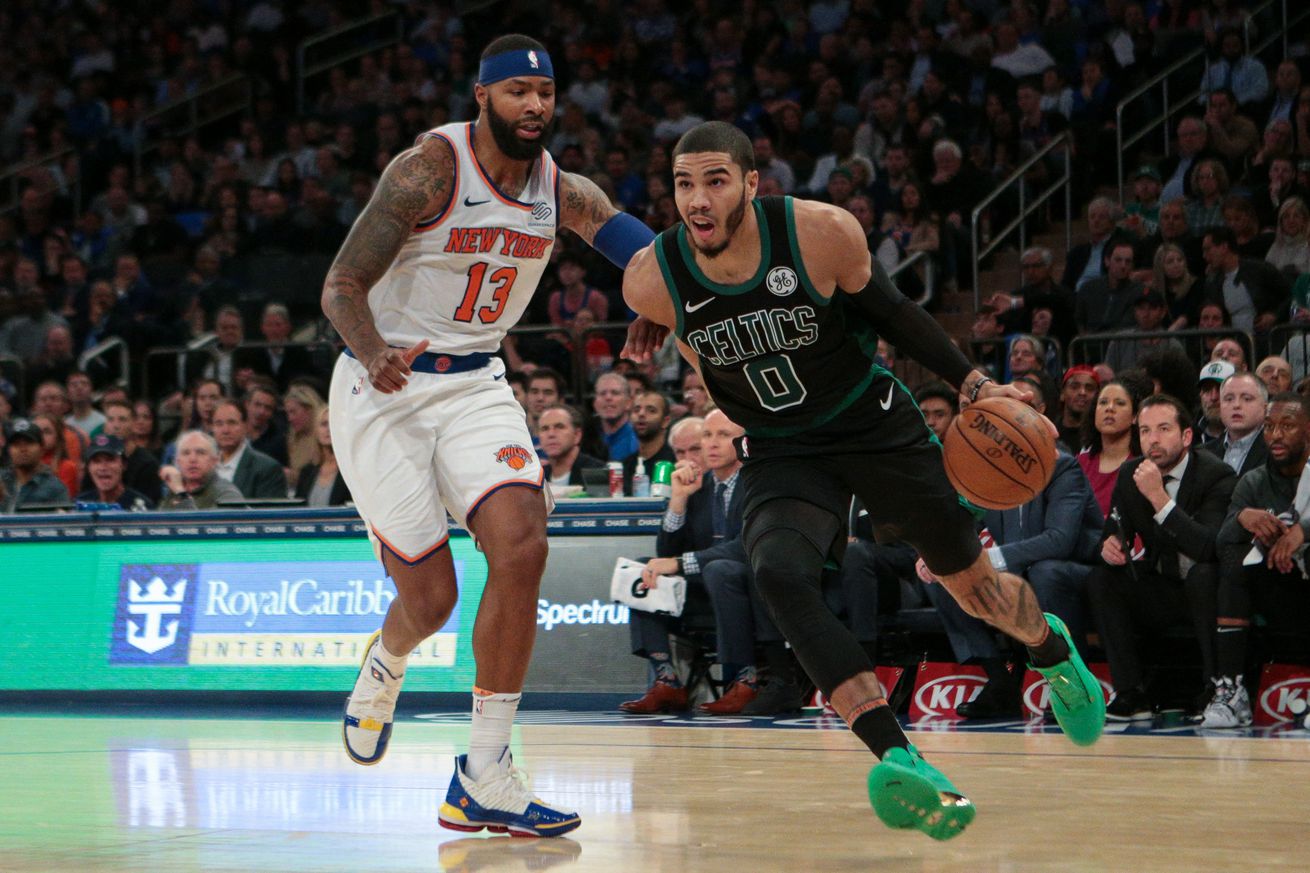 Admittedly, it’s early in the year and tough to draw too many conclusions from the small-sample size figures but here’s where the Celtics stand out.

For the first time since that incredible playoff run in 2018 that saw them take LeBron James and the Cleveland Cavaliers to seven games in the Eastern Conference Finals, the Boston Celtics have the look of a team that’s fully together. After last year’s brutally disappointing campaign, the Celtics entered the 2019-20 season with a clean slate, hoping to start fresh and bring that energy back to the Garden.

Five games into the season, the Celtics are 4-1, trailing only the undefeated Philadelphia 76ers and the Miami Heat in the Eastern Conference standings. It’s admittedly early, and therefore difficult to draw too many statistical conclusions with the small sample size, but I took a look at some of the Celtics team stats that have stood out so far.

For starters, the C’s currently rank 28th out of 30 teams in the league (All stats per Cleaning the Glass unless otherwise noted) in terms of eFG% (Effective Field Goal %). Conventional wisdom says that this team is simply too talented to end the year in such a low position on this metric. In Kemba Walker, the Celtics have one of the best shot-makers in the league, and he will be expected to connect on a much higher percentage of shots than his current 40% mark from the field. It’s also hard to imagine that Jayson Tatum finishes the year shooting just 34.9% on two pointers.

But a deeper look at the numbers shows that there have been some clear growing pains so far this year with the new offense. Last season, just 43.5% of the Celtics shots came with a closest defender within 4 feet of the shooter, with the offense creating a majority of open looks. But so far this year, that number has ballooned up to 52.8%. There have been far too many offensive possessions like this, where the Celtics opt for contested shots too early in the shot clock.

Granted, some regression is to be expected early in the season, but there should be some cause for concern that the Celtics aren’t creating as many open shots as they did last year.

Much has been made of the team’s improved shot-selection early in the year, especially Jayson Tatum’s, as the young forward has tried to take the ball to the basket more instead of settling for long mid-rangers. But the Duke product is shooting just 48% at the rim, which is in the 20th percentile for players in his position, per Cleaning the Glass. His low percentage is something to definitely keep track of, although optimists would argue that it should improve as Tatum gets more reps taking the ball to the hole. It’s encouraging to see him continue to take these shots, but he will need to start converting more, or at least start drawing more fouls, if the Celtics want to take a step forward from their 19th ranked half-court offense.

One area where the team has thrived this season has been their ability to both force and avoid turnovers at an impressive rate. So far this year, Boston ranks first in both TOV% (percentage of possessions ending in a turnover) and opposition TOV%, and we can see here on this graph just how good they’ve been in that facet of the game.

It’s hard to imagine that Gregg Popovich and the United States coaching staff didn’t have something to do with the Celtics improved defensive efficiency. Throughout the tournament and pre-tournament games, the United States World Cup team, especially Marcus Smart, focused on the value of defense. Prior to the tournament, Smart said, “We don’t have guys like Kevin Durant, Carmelo Anthony and those guys to bail us out on the offensive end so our defense is going to be real important for us.”

That mentality, which Smart, Tatum, Walker, and Jaylen Brown adopted during their time with the national team, has carried through to the regular season – with even Kemba Walker showing a new and improved defensive game. Walker, often considered a liability on that end of the floor during his time in Charlotte, has set the tone on defense with his peskiness and willingness to put his body on the line. Per Synergy, so far this year, Walker is tied for the league lead with 1 charge drawn per game.

Jayson Tatum, too, has looked better on the defensive side of the floor. After performing better than nearly 80% of wings who played more than 1000 minutes in terms of defensive activity last season, Tatum has further upped his deflections from 1.9 to 2.8 per game according to Synergy and seems to be looking more for turnovers. Although he has shot poorly in some of the early games, Tatum is proving that he can be an effective defensive player even on a cold offensive night.

With centers Enes Kanter and Robert Williams missing time in the early part of the season, the Celtics have largely thrived by going small, using Grant Williams, or even Marcus Smart, as the de-facto big man. While these lineups allow for switching on defense and more movement on offense, the Celtics have, as a result, lacked size on the boards. They currently rank in the bottom ten in both offensive and defensive rebound percentage, but those numbers both figure to go up once Kanter, one of the league’s better board men, returns. Just as the team gets extra possessions each game with their positive turnover differential, Kanter can help the Celtics get extra possessions on the boards.

While it’s too soon to draw many conclusions from these early season, small sample size statistics, the Celtics already have important wins against the Toronto Raptors and Milwaukee Bucks in the early part of the season. If they can improve on their half court offense, while maintaining their turnover and transition numbers, the Celtics could erase the memory of last year’s misery and take valuable steps towards re-building a competitive championship-level squad.