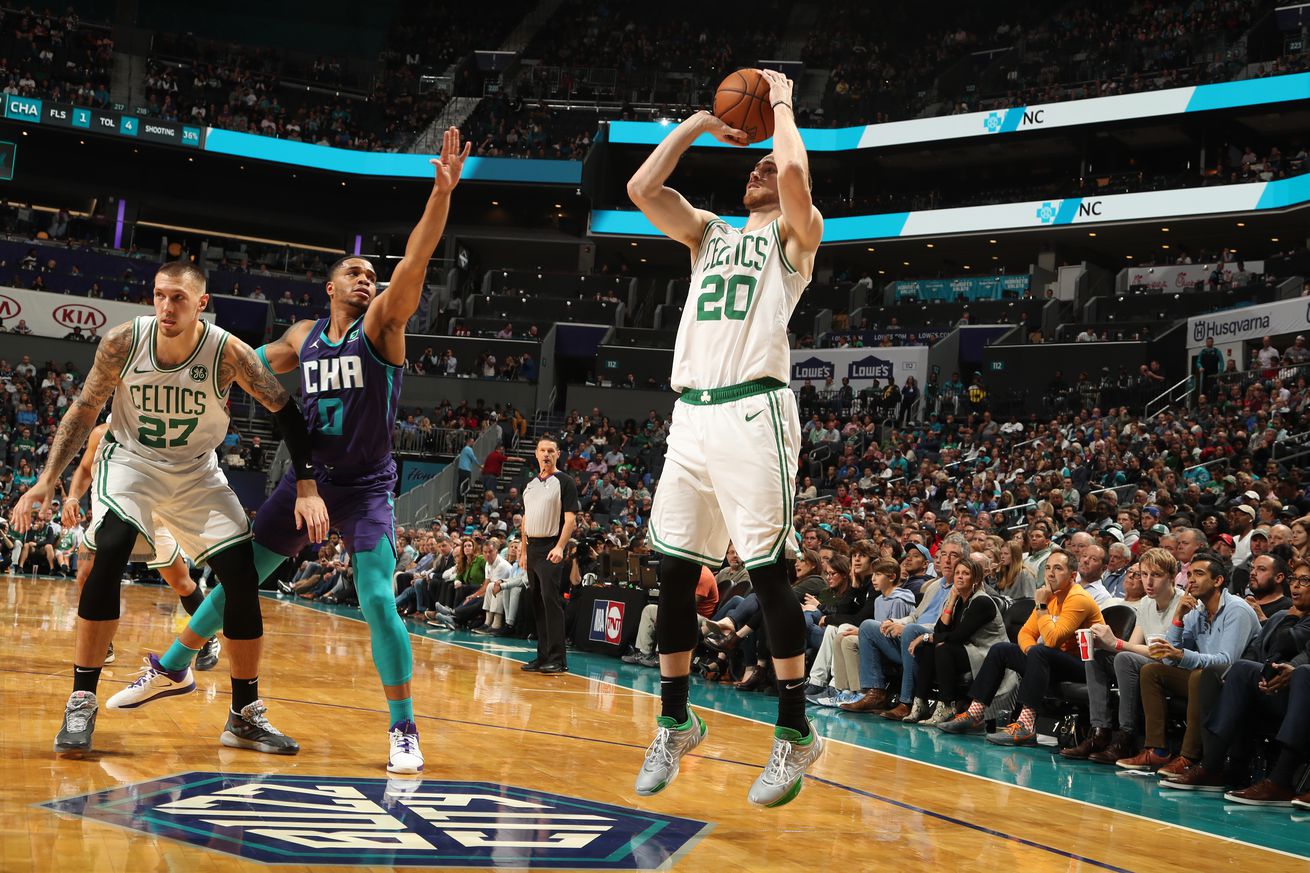 Boston wins its sixth straight as Kemba Walker emerged in the second half of his first return to Charlotte.

Charlotte led the league in double-digit comebacks entering Thursday, scoring all four of their victories from behind. Kemba Walker’s emergence after an 0-for-6 first half and Terry Rozier’s (1-for-11, 3 points) continued decline helped Boston thwart the same fate the Warriors, Pacers and Kings suffered before Thursday.

Charlotte built a 7-2 lead behind Bridges’ first three and PJ Washington’s pass that set up a cutting Dwayne Bacon floater. Hayward immediately pulled the game back with involvement on four straight buckets.

Boston started the game assisting on 10 of their 11 buckets — 29 on 40 makes for the game — while Hayward hit an early jumper and found Theis twice in their two-man game. Hayward capped his first six minutes with three assists, finding Jaylen Brown for his first bucket since returning from a three-game absence and an 11-9 lead.

Marcus Smart (5 ast, 2 steals) entered on the ball to hit a three and find Hayward for his second bucket. Hayward poured in four points in 20 seconds after Smart swiped Washington’s pass.

Walker opened his scoring with a trio of free throws, then Hayward reached double figures soon after, cutting inside off Smart then aggressively trying another three after securing a stop and 25-13 lead. Hayward started the game with another lethal stretch, hitting 6-of-7 in the first quarter.

The Hornets chipped back late in the second frame, finding height in the post through mismatches. Washington (5 blocks) knocked in a three-point layup over Smart’s foul. Bridges tossed in a layup over Carsen Edwards on a post-up after Washington blocked Brown driving baseline.

Charlotte trailed by 14 and pulled within four late in the half as the floor opened up through Devonte Graham. Graham split a pair of threes, hitting the first then trying another after Rozier stole the in-bounds pass. Bridges nailed a pull-up three, then Washington secured a stop at the rim at Brown going baseline and Graham faked a pull-up above the arc to open the lane for Bridge’s tomahawk slam.

The Celtics still finished the half securely, pushing an 11-6 run in spite of Cody Martin’s vicious dunk for a three-point play and Rob Williams lobbing a rebound to Graham for a three.

Boston extended its lead through the third quarter. Rozier led the frame off with his first bucket, before Hayward converted a jumper and layup. Tatum hit a three dribbling in transition for a 59-45 lead after Boston only led by nine at half. Hayward, Walker and Brown continued to drive an explosive transition attack, Hayward grabbing the board, then Walker catching his pass, sprinting, pausing and awaiting his trailers.

Hayward’s penetration, with looks toward the low post, poured Charlotte’s defense inside and opened massive space for Tatum on the right wing to splash a three. Walker’s pair of step-back threes stretched the lead farther, to 75-59, as Hayward reached six assists.

Javonte Green and Brad Wanamaker rotated into the game for some load management into the fourth. Five straight points from Rob Williams into the final frame pushed the Celtics beyond the 20-point plateau and on to their sixth straight win of 2019-20.