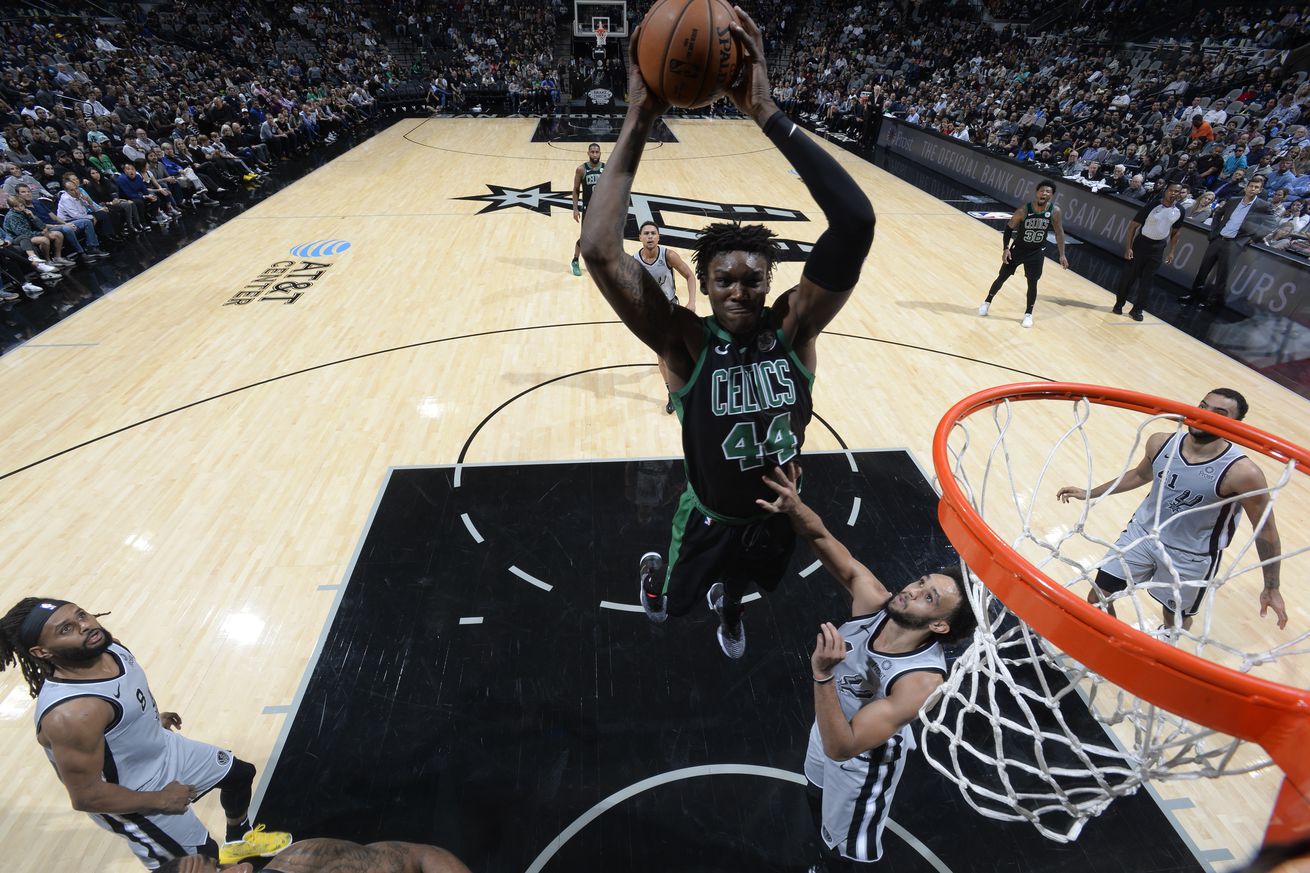 1. The blowout win was Boston’s first in San Antonio since 2011. It was also a big win from the standpoint that the Spurs have dominated the Celtics as of late, with wins in in 14 of their last 15 matchups before Saturday.

However, any good feelings from the victory are muted because Gordon Hayward suffered a fracture in his left hand. At this point, the exact extent of the injury is unknown. Hayward was spotted in a temporary cast following the game and will have a further evaluation following the team’s return to Boston.

The injury is without a doubt a blow, as Hayward was playing some of the best basketball of his career this season. The Celtics under Brad Stevens have been renowned for their ability to come together following injuries, and now they’ll have to do it once again.

2. As for the game itself, Boston got off to a slow start, perhaps due to the early evening tip-time. But Jaylen Brown took over for the Celtics and got it going. He had back-to-back drives in the first quarter where he showed just how much his game has grown. On this first clip, Brown steals the ball and gets out in transition. In previous years, Brown puts his head down and runs himself either into a charge or into a tougher shot. Here, Brown controls his pace and gets himself the easy layup:

On the Celtics next possession, Brown again has it in transition and immediately attacks the paint. Instead of going for the highlight play, he slows down, stops and draws the And-1:

Both of these plays show just how in control Brown is now. Combine that with his ability to turn on the jets and fly high, and that’s an exciting prospect for the Celtics.

3. Not be a broken record in this space, but rebounding was an issue once again. The Spurs grabbed six of their own misses in the first quarter. Overall, San Antonio had 21 offensive rebounds. Now, 11 of those came in the fourth quarter when Boston had the game well in hand, but it’s still got to be a concern for Stevens going forward. Simply put, the Celtics initial defense is far too good for a lack of rebounding to let them down.

4. Boston went back to their hallmark “switch everything” defense. They especially amped this up against the Spurs backup groups. That means all five defenders have to be on the same page, but on this play the communication is poor and results in an open three-pointer for Patty Mills. Jayson Tatum and Hayward don’t talk, while Daniel Theis remains rooted in the paint. It is nitpicky, but this sort of stuff could cost the team in a close game.

5. Grant Williams is becoming positively Marcus Smart-like in his ability to impact the game without doing much in the box score. Here, Williams has to pick up the guard on the switch. First, he stays high and that means Bryn Forbes can’t take the three. Forbes tries to drive, but Williams completely swallows him up.

6. Daniel Theis was the game’s unsung hero. He was the primary defender on LaMarcus Aldridge and helped hold the Spurs All-Star to just three points on 1-of-4 shooting. Theis also scored eight points and is showing some real chemistry with his teammates, as he times his cuts perfectly like he does here:

7. Injuries mean that Stevens has to rely on his depth. He got great nights from both Robert Williams and Javonte Green, as both got increased opportunities with Enes Kanter and Hayward out. Let’s start with Timelord, as his night was ridiculous.

This first one is a set-play off the inbounds. Williams spins off Jakob Poeltl and then just uses his leaping ability to finish:

Then, if a defender gets caught in no-man’s land, as Trey Lyles does here, Williams is making the rim run:

8. As for Javonte Green, he’s going to see an uptick in playing time with Hayward out. All he needs to do is defend and run the floor like this. Bonus: look at Tatum get his head up and be a playmaker versus looking to score himself!

9. Green and Williams also linked up for a play that still boggles the mind with how high Williams got up:

10. This last one tells the story of the game in one play and of what the Celtics want to be as a team. Just before the clip starts, Williams stoned Aldridge in the post and forced him to give it up. Then Forbes and Aldridge run a pick and roll and Forbes thinks he’s got the shot. Williams has other plans. Rather than send the shot about 10 rows deeps, Williams controls it, recovers and starts the break that Javonte Green finishes.