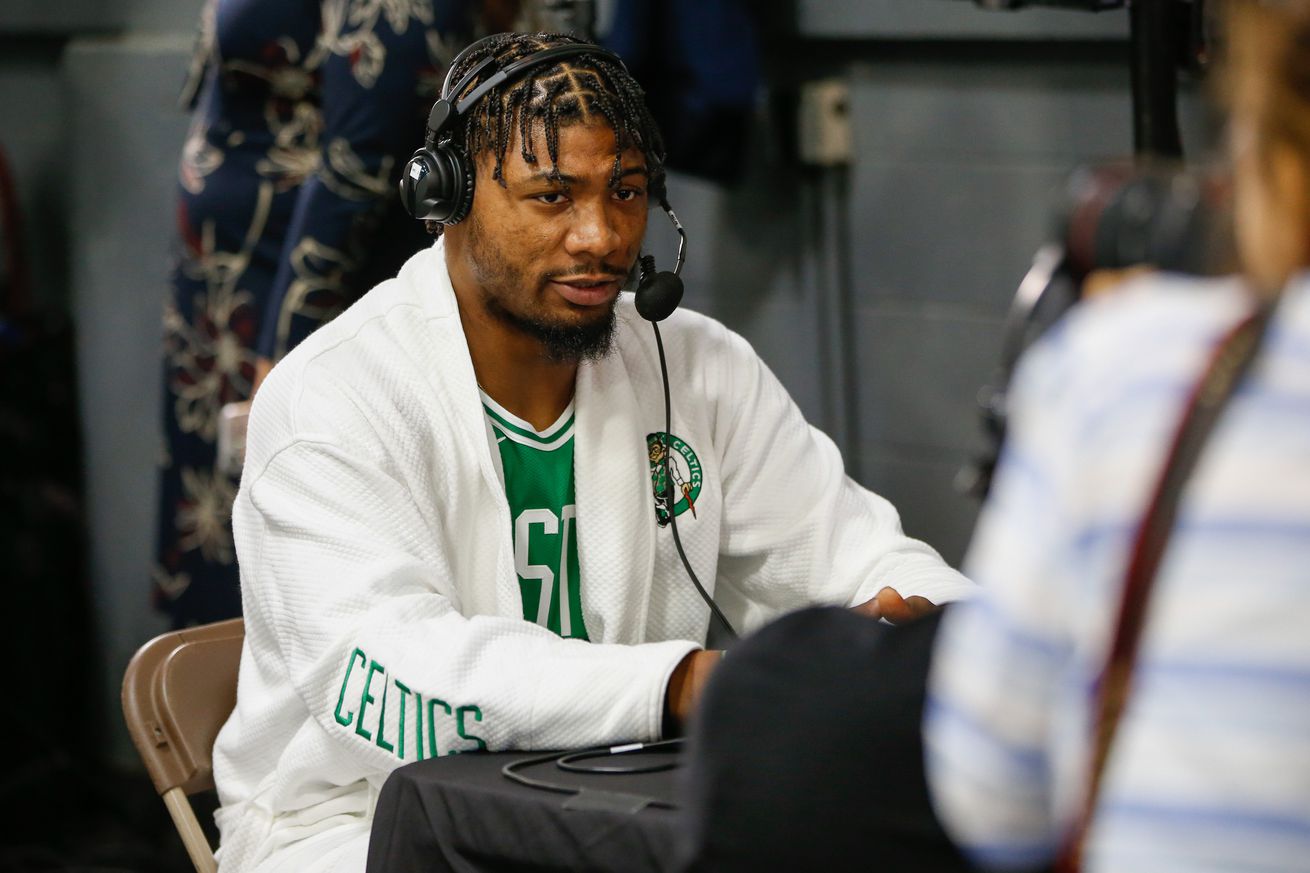 Smart’s evolution is clear to the naked eye. Over the last two years his shooting has been on an upwards trajectory.

Marcus Smart has never been known as a scorer. Instead, his reputation is built upon hustle plays and intense defense. Evolution is natural in NBA players. Improvements are made during the summer where insurmountable hours are spent in the lab.

Smart’s evolution is clear to the naked eye. Over the last two years, his shooting has been on an upwards trajectory. His shooting form and motion look smoother which in turn breathes confidence into his play.

This growth as a three point shooter was evident last season, posting his highest three point percentage of his career at 36.4 percent. He did this on 4.3 attempts per game which is roughly his career average for three-point attempts.

To start this season, Smart is taking 6.1 attempts per game from all over the floor. Previously, you would see Smart take a position in the corner. If the shot was there he would take it, but he did not exude confidence when doing so.

This year, his body language looks relaxed, and his shooting form is one smooth motion.

While Smart hitting the corner three is a welcome addition to this team’s offense, it’s not as encouraging as when he pulls up for a jumper in transition or curling off a screen at the top of the arc.

He has done both of these things with increasing regularity over the opening games of this season, having a modicum of success.

Take the above play, for example. Smart runs the floor in transition as the ball handler. He is controlling the pace of transition in order to allow his teammates time to get up the floor with him. Daniel Theis sets a nice screen just outside of the elbow three which Smart goes under. This provides him daylight for an uncontested pull-up three which he nails.

A rudimentary play, yes. However, Smart is shooting with a confidence and regularity which can elevate his impact on the game to another level. His defense has never been in question. He is one of the best in the league at that. Shooting, however, has been a point of contention for the majority of his young career. Should he continue to display this level of shooting ability, that could all change.

Here is another example. Smart comes under a screen set by Robert Williams and shoots in motion for an easy three.

It’s a play that keeps getting called for Smart who is answering the call more often than not, an excellent improvement in an area of need for one of the Celtics most beloved players.

By shooting at a much more respectable rate, Smart is able to draw his defenders out to the perimeter now where previously they would sag and invite him to shoot. Due to this he is able to split the defense with a smart pass or beat his man and drive the lane.

This clip is the perfect example of how hitting your threes can open up the floor for you.

Where previously his defender would have dropped to discourage a drive, he stays up on his man. Here is where options will open up, Smart could call for a screen or a horns set, he could even size up his man the fire a pass to a cutting wing. Having defenders respect your shooting spaces the floor. It’s what modern NBA offenses are predicated on.

In this instance, nothing more than a quick first step followed by a change of pace is required. He drives into the lane and finishes with an extended arm at the hoop. Now the defense has to worry about his driving ability along with the new three-point shooting he brings.

Charlotte chose to play high up on Smart in their most recent match up. It worked for this most part, too. He was held to just 2-of-8 shooting and just 1-of-4 from deep. There is always a trade-off though. In this instance, it allowed the space for passes such as the one above.

It’s early in the first. Smart bring the ball up the floor to be met by his defender at the top of the three-point line. Positioning his back to his man allows him to survey the floor whilst protecting the rock. He sees Gordon Hayward making a run and times the pass to perfection.

Kudos to Hayward on this play, too. He runs the floor and sees Theis setting a high screen which Hayward guides his man into. Changing direction on a dime, he then cuts straight down the center of the court to receive the bounce pass and finish the dunk.

Smart will never be a first option on offense. That’s just not his game, developing these skills will elevate his game though.

Already an All NBA Defensive Team member, Smart will be looking at how he can add further honors to his resume. Scoring is definitely going to help him achieve this.

All-Stars affect the game on both ends of the floor. They are able to elevate their play when the game is on the line whilst improving those around them. Sound familiar? This is exactly what Smart brings to the table, improving his scoring average into double digits may be the tipping point which puts him in the conversation come February – if not this year then maybe next.

The emotional leader of the team is showing his body of work throughout the off-season. That is what you want from your vets. Teams need their vets to set the tone for the younger players on the roster, to show them what it takes to improve and sustain in the league. Boston is lucky enough to have such a player in Smart and now the organization and fan base can enjoy the fruits of his labor all season long.