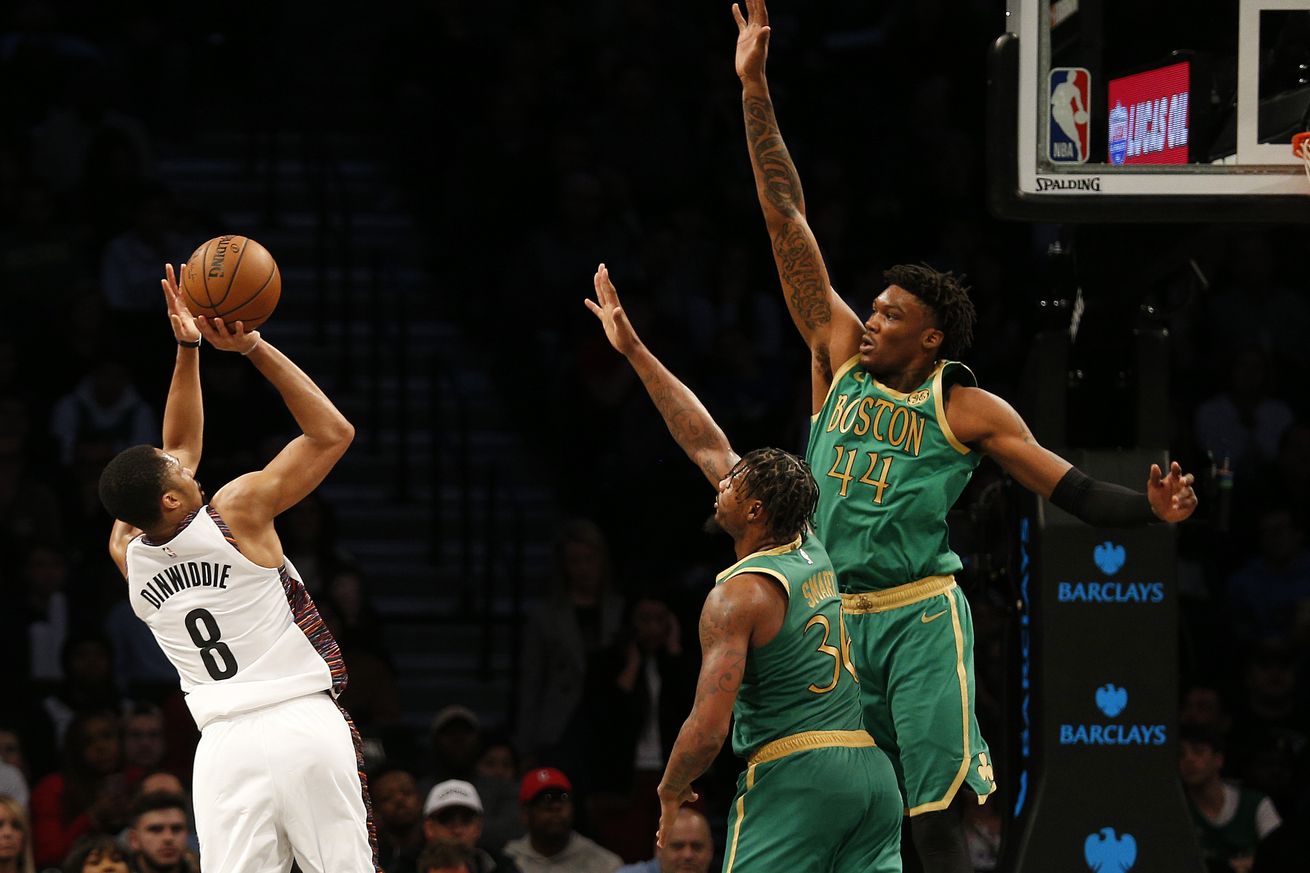 1. Like a lot of the United States, the Celtics seemed to be suffering from a post-Thanksgiving hangover on Friday. Without any Black Friday shopping to jump start them, Boston slogged through a 112-107 loss to the Nets. Much like the win on Wednesday in Boston, the Celtics struggled to defend the three-point line, couldn’t contain Brooklyn on pick-and-roll plays and were sloppy with the ball. That last one was a particular problem, as the guys in green threw it away 19 times. Many were careless, lazy or a combination of the two, like this turnover from Jayson Tatum:

2. We’ve talked a lot about Jaylen Brown’s newfound patience this season, and last game we talked about him doing stuff in the post. Here’s a combo of those at work to draw the And-1 chance:

And then the patience again, as Brown doesn’t try to go over or through Jarrett Allen on the drive, but throws a fake to get Allen up in the air before finishing:

3. Because it was back-to-back game against the same opponent, this one had a little bit of a playoff feel, as both coaches could gameplan for their opponent a little. On Wednesday, the Nets primary halfcourt action was the pick-and-roll game, usually with Spencer Dinwiddie and Jarrett Allen. In that game, Boston was hyper-aware and came off shooters to help on those plays. That freed up the Nets for a whopping 56 three-point attempts.

On Friday, the Celtics stayed home on those shooters. That allowed Allen to roll freely or for Dinwiddie to get whatever he wanted on the way to 32 points and 11 assists. In this clip, Enes Kanter was particularly bad. He gets caught in no-man’s land. Kanter either needs to come up and pressure Garrett Temple to make the pass tougher, or he needs to drop and take away the lob to DeAndre Jordan, while trusting his teammate to recover to the ballhandler. He gets caught in the middle and instead does nothing:

4. After falling behind in the first quarter, the Celtics made a really nice run to start the second quarter that was keyed by the reserves. The bench was solid throughout the game, led by Brad Wanamaker once again. Kanter, despite some rocky defense at points in the second half, was also good, while Robert Williams and Carsen Edwards had moments too.

Injuries are never a good thing, but guys being out has given other players a chance to step forward. For the most part, those players have delivered. That should help when we get into the dog days of the season in February and March.

5. We picked on Tatum to start the Takeaways because of a bad turnover, but Boston isn’t even in the game without him. He had a monster first half with 18 points on 7-of-11 shooting. Tatum would finish with 26 points for the game, as the Nets made a concerted effort to deny him touches in the second half. On that latter point, it would be nice to see Brad Stevens engineer some touches for Tatum, but Tatum also needs to be more aggressive about getting the ball and not letting defenders take him out of the play.

6. This is such a simple, commonplace play from Marcus Smart, that most will overlook two things. First, look how hard Joe Harris closes out on Smart. In years past, defenders would lay back and give Smart leeway to shoot from behind the arc if he wants. Not anymore.

Second, Smart realizes Harris over-closes and is turned a half-turn the wrong way. As soon as Smart catches it, he’s off to the hoop:

7. Robert Williams continues to be a roller coaster. He makes a few plays each game that make you jump out of your seat on the couch. Then he follows those up with a few plays that make you want to throw the remote through the television. And he’s the Timelord, but he’s not going back in the past to catch that remote for you.

Williams was more good than bad in this game. He broke out this new lefty jump-hook that we’ve never seen before:

And Williams’ passing continues to be excellent, as he finds Semi Ojeleye out of the post for the three-point play opportunity:

8. After allowing Brooklyn to hoist 56 three-point attempts on Wednesday, Boston made some subtle tweaks to the defense on Friday and allowed “only” 41 attempts. A problem in this game, one that we almost never see from the Celtics, was getting matched up in transition. Maybe it was the early start, maybe the tryptophan was still in their systems, maybe they were bitter about missing out on Black Friday deals, but it was part of a sloppy all-around performance from the Celtics and not the sort of smart, crisp execution we’re used to.

9. It’s been a really rough stretch for Grant Williams. He still can’t make a shot and teams are starting to realize they can catch him being a rookie at times on defense, especially when he’s off-ball. On-ball however, Williams remains quite good.

With Boston going small and in “switch everything” mode, Williams picks up Dinwiddie. At this point in the game. Dinwiddie had cooked everyone else. But Williams stays in front of him, pokes the ball away and then blocks Dinwiddie’s fall-away jumper. This is the versatile defense that keeps Williams on the floor:

10. And when Grant Williams needs inspiration for how to play bigger than his size, he only need look to Marcus Smart – Rim Protector to be his muse: