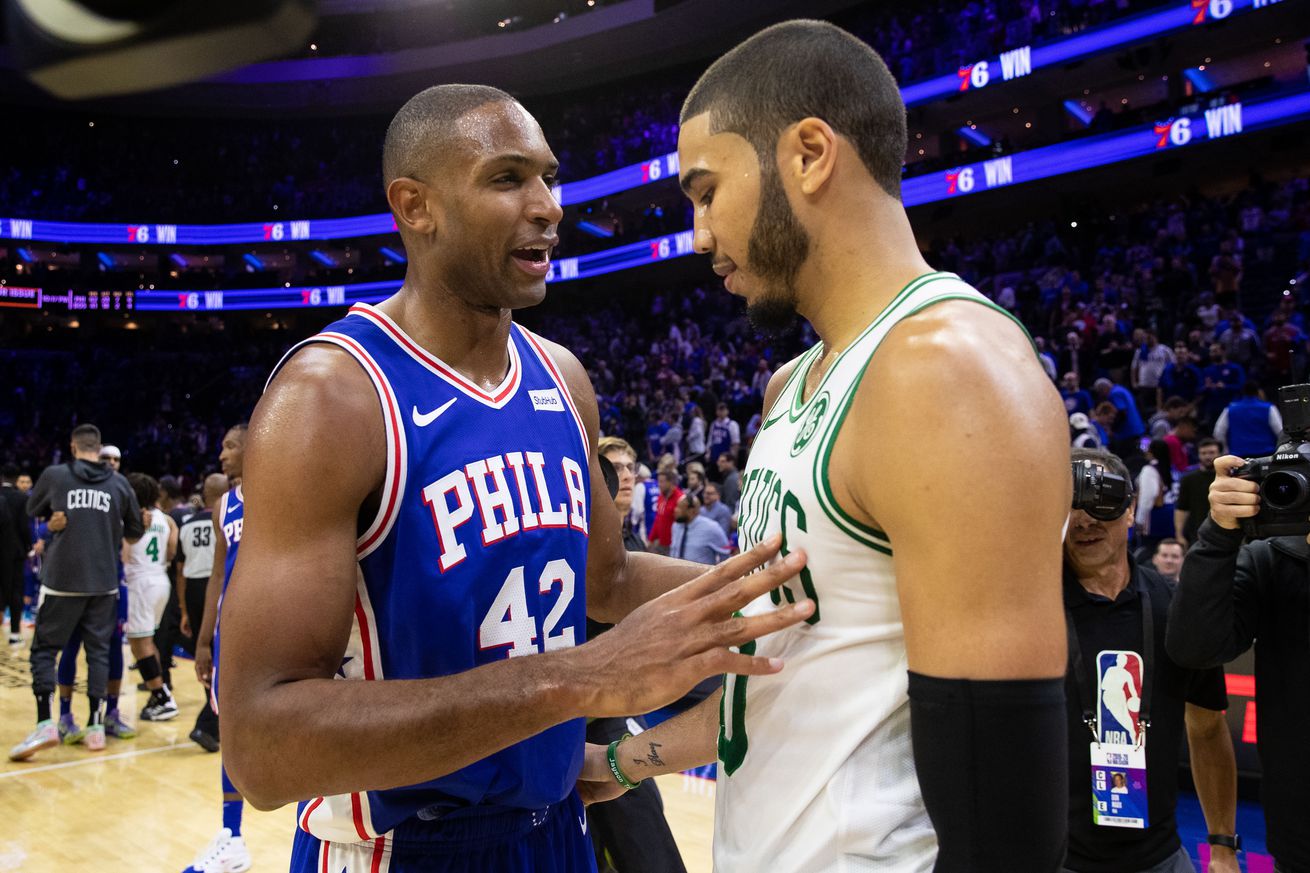 The Celtics host the 76ers as they look to avenge opening night loss in Philadelphia.

The Philadelphia 76ers make their first visit to the TD Garden this season for the 2nd of 4 meetings between these two teams this season. They played on opening night in Philadelphia when the Sixers won 107-93. They will meet again in Boston on February 1 and once more in Philly on January 9.

Both of these teams are undefeated at home (along with the Heat). I can imagine that the 76ers would love to hand the Celtics their first defeat on their home court, leaving just two teams undefeated at home. The Sixers are just 5-7 on the road. The Celtics are playing in their third back to back set this season. They are 2-0 on the second night of back to back games.

The Jaylen Brown and the Celtics inadvertently gave the Sixers some bulletin board material after their win against the Cavaliers. Grant Williams finally hit his first three pointer, after missing his first 25 tries. When discussing the nicknames the team had for him as he progressed from 0-1 through 0-25, Jaylen Brown mentioned that they were calling him Ben Simmons, who has famously been hesitant to even shoot threes. I’m sure that Simmons and his teammates have an additional bit of motivation to beat the Celtics after that.

Al Horford will make his first return to the TD Garden since he left the Celtics for the 76ers in free agency. He should get a warm welcome when announced, but after that, he is the enemy. He is listed as questionable to play, however, with knee soreness and hamstring tightness. I’m not sure who they will start if Al can’t play. Also of interest is Matisse Thybulle. The Celtics drafted Thybulle with the 20th pick in exchange for the Sixers’ 24th and the 33rd picks. Thybulle is proving to be an elite defender and is shooting 36% from beyond the arc.

Marcus Smart (eye) and Robert Williams (hip) both missed the game on Wednesday at Indiana and both of them have been ruled out for tonight’s game against the 76ers. The Celtics really could have used Smart’s defense in this one, but it’s more important that he get 100% healthy. They will miss Williams’ length against a very big Philly front line.

Gordon Hayward took a hard hit to his nose and left Wednesday’s game. He did not return to the game but after the game he stated that he did not break his nose and is not in the league’s concussion protocol. He is listed as probable for tonight’s game. Jonah Bolden and Zhaire Smith are both game time decisions for the Sixers. Al Horford went through shoot around but is being treated for a sore knee and hamstring tightness. He is listed as a questionable and his status will be a game time decision.

Daniel Theis vs Joel Embiid
The Celtics will miss Al Horford to guard Embiid as he always seemed to make the Sixers big man struggle. Embiid is averaging 22 points, 12.4 rebounds, 3.1 assists and 1.4 blocks per game. He is shooting 45.8% from the field and 30% from beyond the arc. It will likely be center by committee for the Celtics to try to slow Embiid down. If all else fails, hopefully Marcus Smart will be healthy enough to get a shot at it also.

Gordon Hayward vs Tobias Harris
This is a key matchup, not only because Harris is averaging 19 points, 7.0 rebounds, and 3.2 assists and shooting 48.5% from the field and 32.4% from beyond the arc, but because Gordon Hayward is back and hopefully will be able to make Harris work hard throughout the game. Hayward will need to play strong on both ends of the court to limit Harris’ effectiveness on defense and to be a playmaker and scorer on offense.

Honorable Mention
Kemba Walker vs Ben Simmons
Simmons is averaging 14.0 points, 7.0 rebounds, 8.4 assists, and 2.4 steals . He is shooting 57% from the field and 40.0% from beyond the arc, which is a little misleading since he has only made 2 out of 5 tries. With the size difference between Simmons and Kemba, if Simmons starts to have a big game we may see Brown or Smart guarding him at times.

Keys to the Game
Defense – Defense is always the key to winning every game. The Celtics have committed to playing tough defense this season and so have the Sixers. The Celtics are 3rd in the league with a defensive rating of 102.2 while the Sixers are right before them at 4th with a defensive rating of 102.7. It will be very important for the Celtics to play tough team defense and keep the Sixers from finding any rhythm on offense.

Rebound – With the size of the Sixers front line and starters, the Celtics are going to have to work hard in order to get rebounds. They need to keep the Sixers from getting second chance points around the basket and they need to give themselves extra possessions by rebounding on the offensive end. They can’t score without the ball and so they need to rebound to get it.

Move the Ball – The Celtics have committed to teamwork this season and that will start with unselfishness on the part of each player and moving the ball and not playing hero ball, which never leads to good things. They need to move without the ball to get open and they need to move the ball to find the open man and the best shot.

Effort and Focus– We will need to see 100% effort from every player and they need to stay focused if they want to get a win in this game. They need to come out and play hard from the start and not let up until the final buzzer. They need to stay focused on playing Celtics basketball and on playing defense. The Sixers are a tough team and they have a lot of size. It will take a big effort on the part of each Celtic to get a win in this one.

X-Factors
Home Game – The Celtics are at home and will get a boost from the home crowd. The Sixers are dominant at home with a 13-0 record but they have not been as dominant on the road with just 5 wins and 7 losses away from home. The Garden should be loud and give the Celtics that extra push they need to get the win.

Officiating – Officiating is always an x-factor. Every crew calls the game a little bit differently. Some call it tight. Some let the teams play. Some favor the home team while others favor the visiting team. Some refs have an agenda and others call it fair. The Celtics have to adjust to the way they are calling the game and not let the calls that go against them take away their focus on playing the right way. Hopefully the officials will call it fair and not give Philly an unfair advantage on the line.

What’s at Stake – There is a lot at stake in this game. First, is pride. The Sixers beat the Celtics on opening night and the Celtics need to avenge that loss or go down 0-2 to a division rival. The Celtics are also vying to remain one of three undefeated teams at home, which is a matter of pride, also. The Celtics’ loss to the Pacers dropped them from 2nd to 3rd in the East, behind the Heat. The Sixers are right behind the Celtics in the standings and a loss to them tonight could drop the Celtics to 4th in the East and most importantly, 2nd in the Atlantic Division. Which team will take it more seriously.