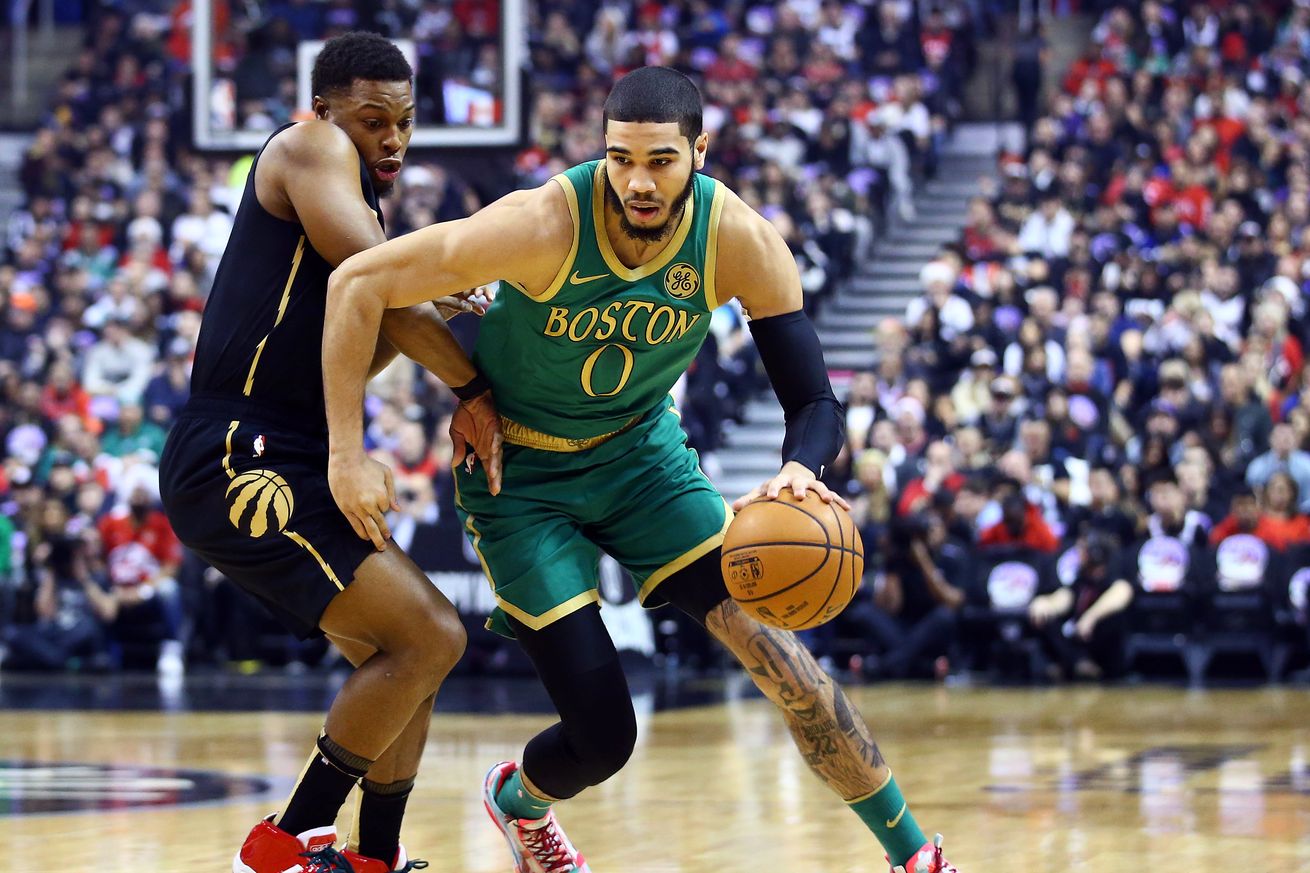 Here’s what is coming in the next 10 years for the Boston Celtics.

He’s not there yet but you can just see the potential growing into actualized greatness before our eyes. Tatum has the talent to score from deep, close, and yes in the mid-range too. He can create shots and score within the flow of the system. He’s increasing his playmaking ability which will only open things up for his scoring even more. Oh, and he’s becoming very reliable on the defensive end where his length and positioning cause problems.

Bottom line is that Tatum has top 5 talent and I could see him winning a scoring title someday. LeBron and Harden aren’t going to play forever and new stars are going to step up into that discussion along with Giannis.

None of this is meant to disrespect Jaylen Brown (because this kind of conversation always seems to come down to comparing those two). In fact, there are potential futures where Jaylen ends up being better than Tatum. I just feel like Tatum is the one of the two that has top 5 ability. Who knows, maybe Brown does too and I’m missing it. Maybe I’m falling into a trap of underrating Brown.

Still, I don’t think it is too much of a slight to say that Brown will be a regular on the All NBA team. He’s added so much to his game already and he’s proven that he’s a hard worker that just wants to keep getting better.

Brad Stevens will NOT win Coach of the Year

Winning the Coach of the Year award is highly overrated. A lot of coaches that win the award are fired soon after. In Dwayne Casey’s case, it was the same year he won the award. The award seems to reward teams that seem to outperform their expectations. Then when the teams don’t repeat that success, the coach is blamed.

On the flipside, Gregg Popovich has been one of the greatest coaches in the game for the past couple of decades but he’s only won 3 COTY awards. If you were simply awarding the best coach, he would probably have a mantle full of them.

Which brings me to my point about Brad Stevens. He’s one of the best coaches in the league (in my not very humble opinion). He’s also going to have very good rosters more years than not. For the most part voters of this award are going to nod and say “good job, but that’s what we expect from Brad Stevens” and then give the award to someone else.

Bonus prediction: Eventually Brad will be the longest tenured coach in the NBA. He’s already 6th.

Gordon Hayward and Kemba Walker will retire as Celtics

Gordon and Kemba are only 29 years old at this moment, so this could be a bit of a stretch. Still, I could see Hayward wanting to ride things out with his college coach. Likewise Kemba seems to really have found a home in Boston. Hayward could sign a long term contract this offseason and Kemba just signed one himself. I could see them both tacking on a few years at the end of their deals at reasonable rates. Both could also transition from stars to support players due to the lack of egos. Maybe this is more of a wish than a prediction, but let’s speak it into existence, shall we?

Bonus: I certainly want Tatum, Brown, and Smart to play their whole careers as Celtics as well. I just don’t see any of them retiring in the next 10 years.

Timelord has all the tools to be an effective modern big man. He just needs a better feel for the game which comes from experience. All he has to do is show a few stretches of competence and flash some of that athleticism and teams with cap space will line up to make him a big offer when he’s eligible for restricted free agency. The Celtics typically have an idea of how much they are willing to pay a player. If he’s well out of that range, they might try to work out a sign-and-trade or simply let him walk. Especially depending on what other center options they find between now and then.

Danny Ainge will retire and Mike Zarren will replace him

Danny has suffered two heart attacks and is currently 60 years old. He could retire at any time and be remembered as one of the great GMs in the game. I hope he’s able to do it after delivering another championship to Boston but nobody would blame him in the least if he wanted to walk away tomorrow and spend more time with his family.

I could also see him taking a promotion and putting more of the day to day operations in the hands of Zarren (who’s been courted by a few teams and is widely seen as one of the brightest minds in the league). Obviously whatever Danny wants is what he deserves. No GM is flawless, but he’s done very, very well in his tenure here.

The Celtics will win the first In-Season NBA Tournament

I don’t know what this tourney is going to look like but whatever it is I could just see the Celtics winning it. Then I can see fans of the rest of the teams making fun of our “fake championship” the rest of the year.

That is until the Celtics win their next actual championship. And when that happens, Marcus Smart is getting the Finals MVP. I can feel this deep within my soul.

Your turn: Share your own wild predictions for the coming decade in the comments below.