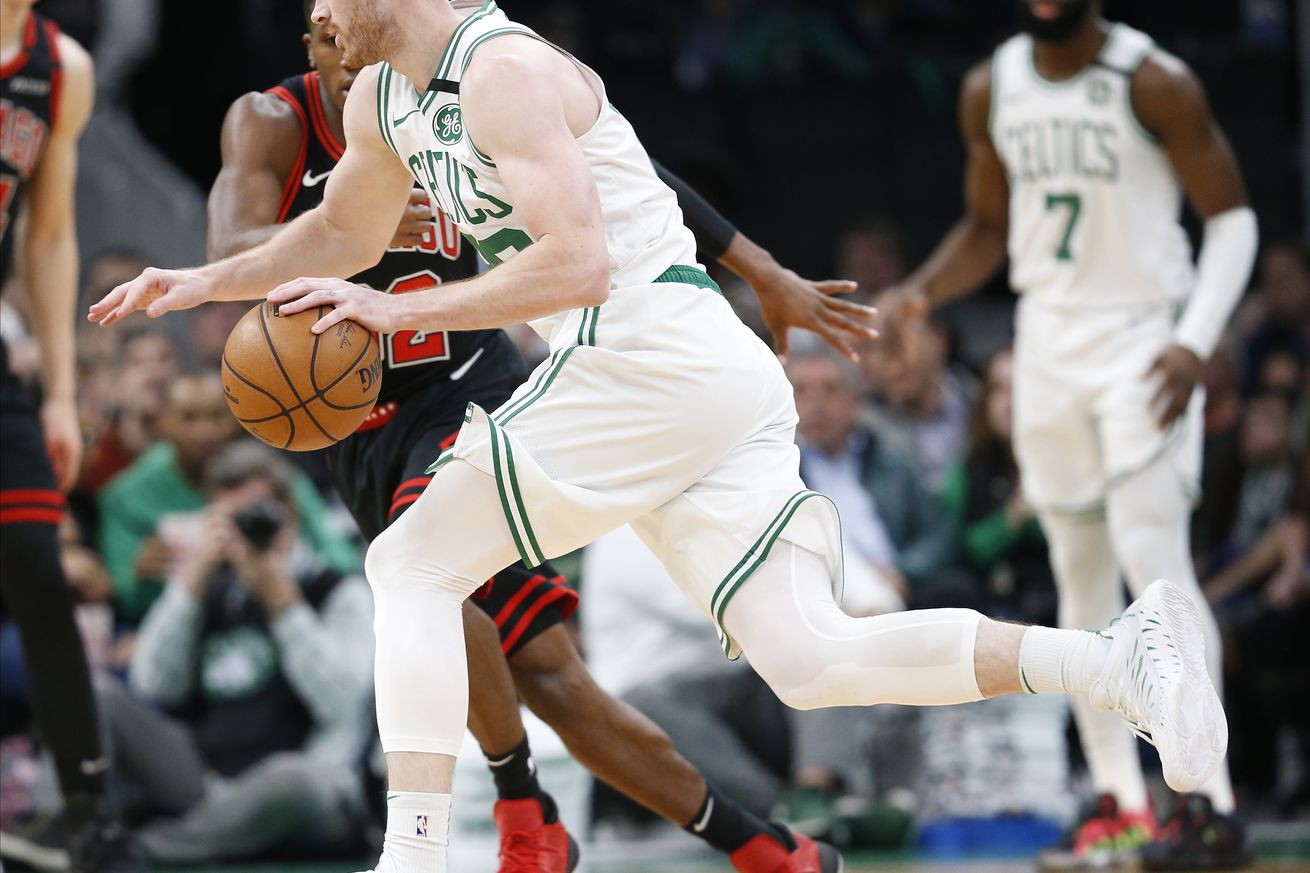 The idea that an individual or small collective of players can win a championship based on individual brilliance alone is a flawed notion.

Currently, the Celtics are one transcendent player short to be considered contenders by the media. They do, however, possess two young players capable of reaching that level in the near future, an All-NBA caliber point guard, and a forward who is getting his groove back following a tough injury-riddled experience in Boston. The rest of the roster is as you would expect: young high potential players mixed with veterans to guide the team through the ups and downs of a tough NBA regular season.

The majority of this team is locked in for the foreseeable future, with the notable exceptions of Gordon Hayward, Enes Kanter (both have a player option this summer) and Jayson Tatum (entering the final year of his rookie contract next summer). Against the Bulls, they showed the ability to share the rock, get others involved, and break down a defense with smart, well-worked passes.

The Celtics finished that game with 38 assists to their name, with both Marcus Smart and Gordon Hayward contributing 8 a piece. NBA Stats has the Celtics ranked 19th in the league for assists per game with 23.3, while the Memphis Grizzlies are currently leading the league with 27.9 per game.

If you want to understand the importance of this, the Warriors have the lead the league in assists since the 2014-2015 season until this current one. In that time span they won three NBA championships. The team who lead the league in 2013-2014? The San Antonio Spurs, on their way to a championship ring. The playoffs tell a similar story too, with both the Warriors and Spurs being in the top three teams for playoff assists during each of their championship years.

During this span there have been two other teams to win an NBA championship, the Cavs and the Raptors, both of whom bucked the trend. Cleveland finished their championship season ranked 13th in the league for assists, but come playoff time, they finished 6th. The Raptors ended last season ranked 13th too and came 9th in the playoffs. Exceptions to the rule, but still teams who possessed effective play-makers such as LeBron James and Kyle Lowry.

It stands to reason that the Celtics moving the rock as effectively as they did last night is a big step in the right direction and indicative of the mindset these players are developing. Against both the Bulls and Pelicans they had success running the high-pick-and roll and slip screens, with the latter being incredibly efficient for Enes Kanter against the Wendell Carter Jr.-less Bulls.

The threat posed by the Celtics ball handlers was causing the Bulls to switch their coverage on the fly. They tried to drop and counter the threat of the drive and to show in order to force the ball out of the play-makers’ hands. Each time this happened, the ball found its way to the open man. During the early exchanges, it happened to be Enes Kanter, who was making the most of his mismatch down low in Carter Jr.’s absence. Having started in place of the injured Daniel Theis, Kanter was matched up with Daniel Gafford to start the game.

When the Bulls went for more general coverage, the Celtics opted for a regular high pick-and-roll, which is something Jayson Tatum and Daniel Theis used to shred the Pelicans 48 hours earlier. Tatum was a beneficiary of this again throughout the game, as the defence struggled to contain his mixture of drives and pull-ups. The threat Tatum was causing allowed guys like Jaylen Brown to get a favorable switch and go to work in the lane, which paid off to the tune of 9 free throw attempts.

The second play is a great example of how the Celtics were using the slip screen to cause mayhem. When the ball is fed into the paint, the defense has to react causing holes in the lanes for players like Brown to exploit with their insane athletic ability.

This is what happens when the ball is continually moving and guys are running off-ball. Favorable switches happen and mismatches occur far more frequently – just ask Coby White, who spent far too much time guarding Tatum in this one.

Being a young team, it is unfair how much expectations get put on their shoulders, but games like this justify those expectations. They were meant to win this game, but it’s the manner in which they did so which is commendable.

In the final press conference of Boston’s post season last year, Brad Stevens spoke about how the Buck’s had built winning habits throughout the year. Moving the ball like this is a winning habit, should the Celtics continue to develop this habit, it won’t be long until those expectations are realized.