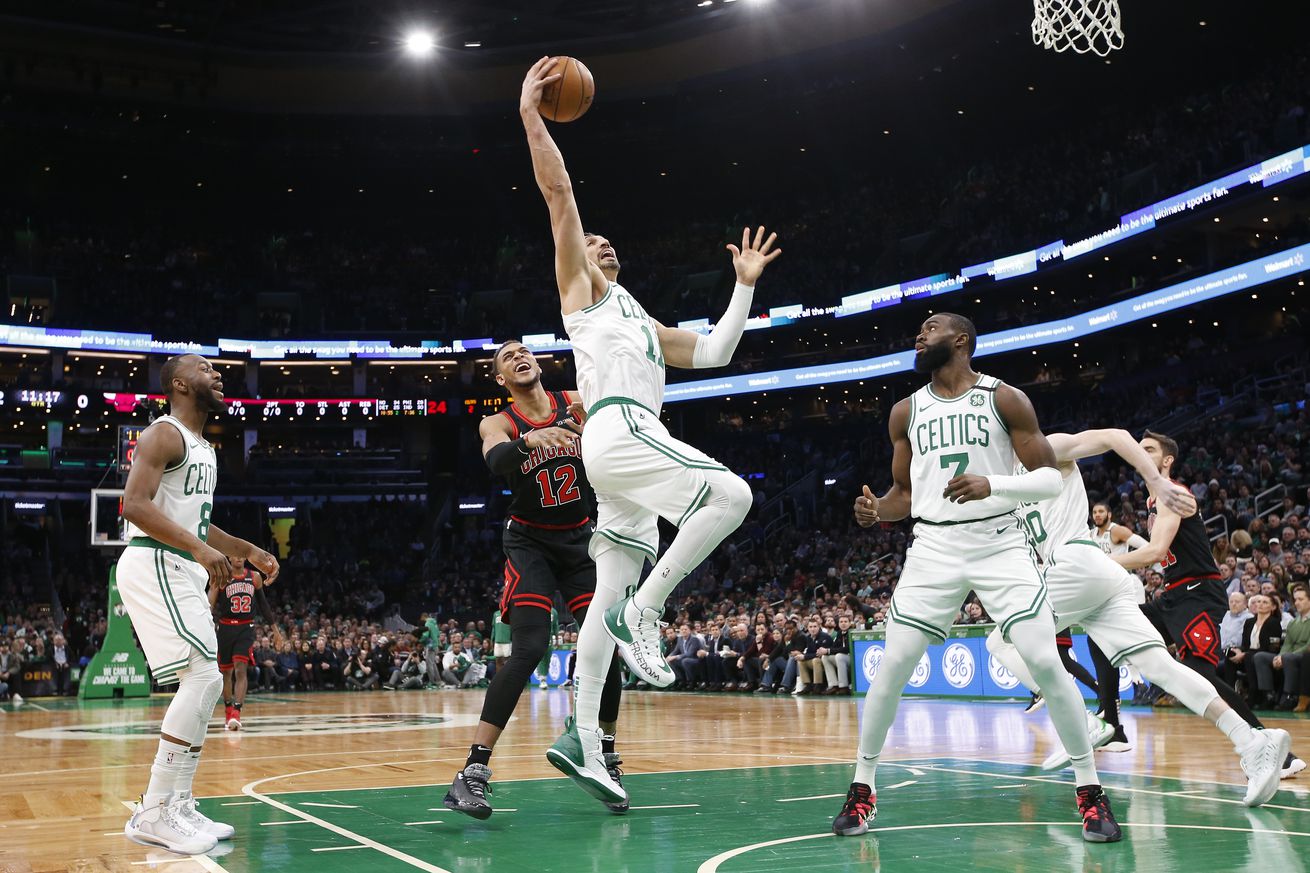 1. Let’s not get crazy about this win. It was against the Chicago Bulls who are pretty terrible. The Celtics were very sloppy at points in the game on both offense and defense. But, the main takeaway from this win is that Boston saw the kind of defense they’ll see at points in the playoffs and made good reads and good plays.

Chicago aggressively blitzes and traps pick and roll ballhandlers. This is seen as a good way to neutralize the smaller Kemba Walker. It gets the ball out of Walker’s hands and can cause turnovers. Against the Bulls, the Celtics were able to read the trap and make the first, second and sometimes third or more, passes to get good looks. That sort of production can get opponents out of the trapping defense. Good experience for what’s likely to come when the games matter a lot more.

2. Enes Kanter drew the start with Daniel Theis out due to right knee soreness. With Wendell Carter Jr. out for the Bulls, the Celtics went to right to work with Kanter in the post:

Overall, Kanter finished with 15 points on 7-of-9 shooting. He also grabbed nine rebounds and likely would have snagged another double-double had he played more than 26 minutes.

3. For a team that doesn’t have a signature rim protector, Boston sure blocks a lot of shots. Against the Bulls they got six more, including this great chase-down from Jayson Tatum:

It looks a lot like Kanter blocked the follow-up from Zach LaVine too, but he wasn’t credited with a block.

Tatum also got Chandler Hutchison on a straight man-to-man drive:

That block led to a Gordon Hayward layup the other way and was a big part of Boston putting Chicago away.

4. Speaking of Tatum, he got it going again offensively with 21 points. He was only 7-of-17 from the floor, but got seven free throw attempts. And he was able to sit for the final 6:44 of the game, otherwise his scoring total is probably even higher. That’s grabbing some valuable in-game rest though, which should pay off down the line.

This is a shot Tatum should be able to get with regularity against smaller defenders, especially once he tightens up his handle a little bit more:

This is also a good one. Simple pin-down screen from Kanter to get Tatum the free throw line jumper:

5. Grant Williams played the majority of the meaningful backup center minutes and he delivered. Williams scored 11 points, grabbed five rebounds (four offensive) and picked up three assists. He also made several good defensive plays, both against bigs and on the perimeter in switches. Williams has largely been solid for the Celtics around the occasional rookie mistake. Given the current makeup of the roster, Boston will need him to continue to deliver good minutes as a backup.

6. Brad Stevens said postgame that “The pass was the most important thing. We moved it well.” A good statistical barometer of the ball movement is Boston’s assist to basket ratio. Against the Bulls, the Celtics had 28 assists on 39 baskets. This type of play where Kanter makes a nice read to Smart off the roll, and Smart passes up a good shot for a great shot from Bad Wanamaker is when Boston is at their best:

7. Jaylen Brown has a lot of the same stuff in his game as Gordon Hayward. They both knock down the little fallaway jumper in the paint off the drive. They’re both explosive out of pick and roll. And now Brown is showing some of the same cutting instincts as Hayward. On back-to-back plays, Brown worked the baseline for buckets. Turn your head to watch the ball, and Brown is gone:

Then, as NBA coaches love to do, Stevens will bleed the same set until the opponent stops it. Chicago traps Smart this time, but he finds Williams, who dishes to the cutting Brown on the short roll:

8. It wasn’t the best shooting day for Brown despite the two dunks, as he remains mired in a slump. Brown was just 5-of-13 from the floor, but like Tatum, he got himself to the line. Brown’s 9-for-9 on free throws was the best performance of his career at the charity stripe. That sort of stuff has been happening more and more and creates offense when the shot won’t drop.

9. Marcus Smart had gone a little bit without doing a real “Marcus Smart” thing, but he had a few against the Bulls. The one was the best, as Smart picks LaVine’s pocket and look at this bounce pass from halfcourt to Hayward for the layup:

10. With the Bulls threatening to hang around, the Celtics went to Kemba Walker on back-to-back trips to finish it off Chicago. First, the step-back:

Then, rejecting the screen for the pull-up:

Coffee is for closers. Kemba gets coffee.