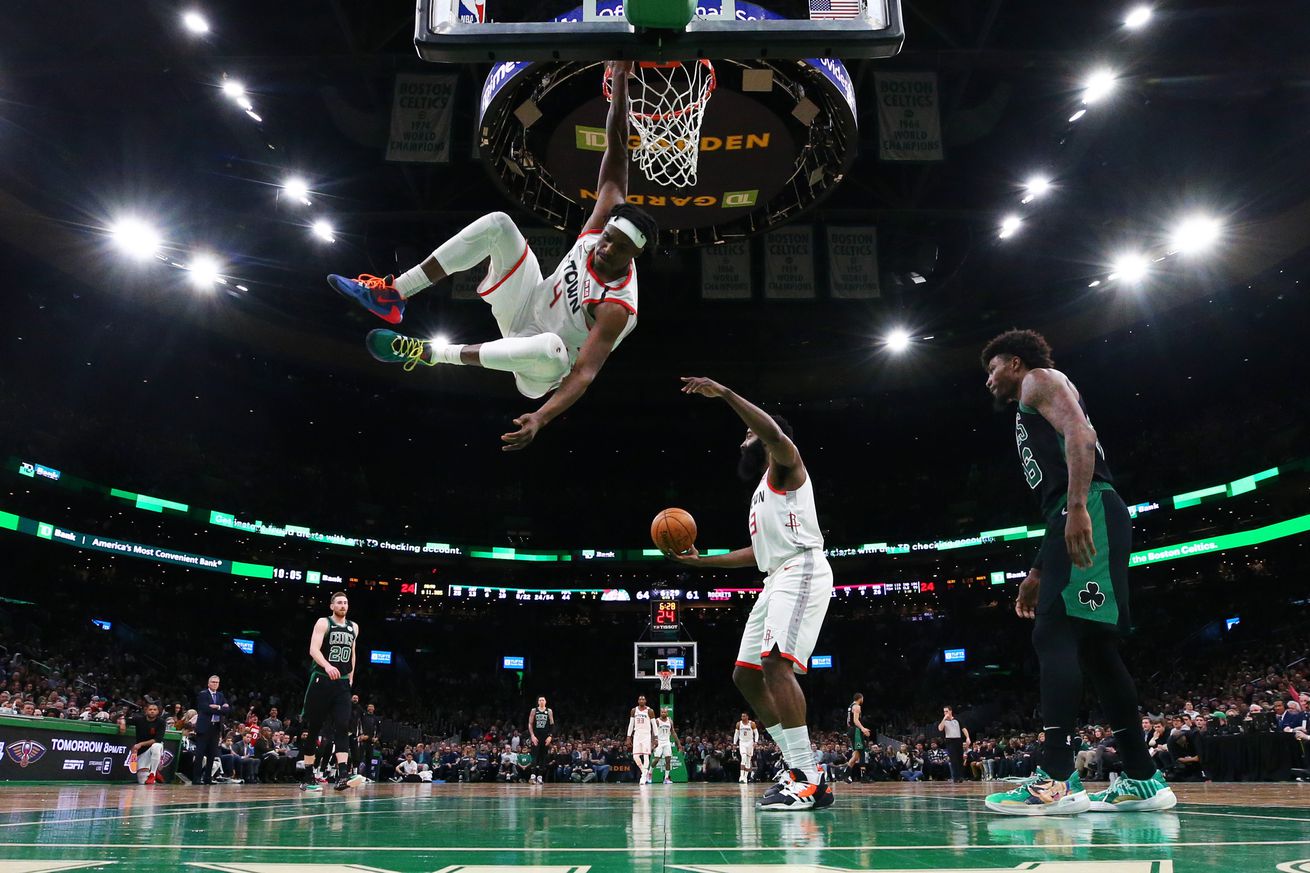 Boston was right there with Houston, but once again came away with a loss

1. Just like a few weeks ago, the Celtics losing to the Rockets isn’t concerning by itself. Houston is a really good team and has played well since they downsized their lineup. However, once again, it is concerning how the Celtics lost.

Going against a playoff style defense that was physical and really amped up the ball pressure, Boston wilted in the second half and late in overtime. Sure, the Celtics had that crazy sequence to force OT, but that masks some very concerning late-game execution. Boston took way too long to get into sets, which was a problem against a dialed-in Houston defense. And those sets often devolved into Jayson Tatum ISOs. While Tatum has been amazing as of late, he was just 9-of-27 from the floor in this one and the ISO ball approach wasn’t working.

It’s correctable, but the Celtics offense works best when the ball moves and everyone is involved. The shots may end up being taken by Tatum, or Kemba Walker, but it’s after the ball moves. Going directly to an ISO approach allowed the Rockets to set their defense and gear everything towards stopping Tatum. It’s on Brad Stevens to figure out how to make the late-game offense more effective.

2. In addition to his buzzer-beater to tie the game at the end of regulation, Jaylen Brown was mostly solid. He got a little out of control late in the first half and a couple of times in the second half, but Brown made some big plays throughout the game. This floater is something Brown has broken out recently and is a nice addition to his offensive arsenal:

Brown’s defense has always been good, as seen on the steal to start this play. But the pass to Grant Williams in transition shows how much better Brown understands how to make plays for others:

With his confidence through the roof, Brown is scoring at all levels. Here, he bullies Austin Rivers in the lane:

And of course, he hit this triple off a wild sequence to tie the game at the end of the fourth quarter:

3. While Jayson Tatum struggled to knock down shots overall, he did score 32 points. What helped was getting to the line 14 times. It’s good to see Tatum is finding ways to create offense when his shot won’t fall. It’s also good to see Tatum is focusing on getting inside when the jumper is off. This drive and spin to the lefty finish at the rim was a pretty play:

This play came off an ATO and was good because it happened quickly. Tatum catches and immediately reads Covington, before spinning for the baseline dunk:

Tatum also had five assists, including this nice find to Daniel Theis in overtime:

4. Outside of Theis, the Celtics went small all game long. Enes Kanter didn’t play, nor did Robert Williams III in his first game back on the active roster. Kanter was out because the Rockets are probably the worst matchup in the league for him. He might have been able to give the bench scoring a boost (more on that later), but it would have come at the expense of the defense.

As for Timelord, this wasn’t the game to bring him back. He does his best work when he can hang back around the rim. Against Houston, you have to defend from the rim to the arc. That’s a tough ask of Williams in his first game back. Williams’ time will come, it just wasn’t on Saturday night.

5. One place Williams is thought to help Boston is with rim protection. While Williams is a fantastic shot blocker, the Celtics are doing pretty well in that area already. Boston had six blocks against Houston, including three from Theis and two from Tatum. Theis is at 1.3 blocks per game, and Tatum is just shy of a block per night himself. Williams is only going to add to the Celtics surprising interior defense.

6. This was maybe the Marcus Smartest of Marcus Smart games. He had some crazy shots (15 three-point attempts!) and gambled a few times on defense, but overall, he made plays to help Boston. Smart had seven assists, including these two finds to Gordon Hayward. First on the run-out:

And then to Hayward on the backdoor cut:

Smart’s playmaking has been on point this season . When Kemba Walker is back, Smart’s return to the bench should really help stabilize the reserve units.

7. Also going a long way to helping the bench groups would be the continued improvement of rookies Romeo Langford and Grant Williams. While neither did anything offensively against Houston, they both stepped up on defense and made nice plays against James Harden. First, Langford does a nice job keeping Harden in front of him and contesting the step-back without fouling:

Then it was Williams’ turn and he similarly keeps Harden under control:

That’s good stuff from the Celtics rookies against one of the toughest covers in the NBA.

8. Unfortunately, the Celtics bench didn’t offer much beyond a handful of defensive stops. The reserves were a combined 1-of-4 shooting for four points. That’s simply not going to cut it. Most nights, Kanter will come in and give Boston eight to 10 points with solid rebounding. Smart always has an impact as a reserve. But Stevens is lacking much else that he can rely on consistently. Brad Wanamaker has done a nice job most of the year, but he might be overmatched against the best teams in the league. Langford and the Williamses are young and unproven.

Danny Ainge has said he’ll make a move if he thinks there is one that can improve the team. It’s obvious Ainge doesn’t see anyone who is currently available as an upgrade over the potential of the younger back-of-the-bench options the Celtics have now. That’s the tricky part of Ainge’s job: managing now against the future. The future remains bright, but it’s become clear that Boston doesn’t have enough off their bench right now.

9. The Celtics were particularly weak with the ball after halftime. They had eight turnovers and were blocked/stripped four other times in the second half and overtime. The Rockets are physical and have quick hands. Boston repeatedly played into that by bringing the ball down to Houston’s level. This was playoff style defense and the Celtics weren’t quite up to the task of beating it.

10. Another troubling sign for Boston was that Houston was quicker to the ball throughout the second half, minus the scramble at the end of regulation. On this play, both Brown and Tatum wait for the rebound. Danuel House Jr. goes and gets it:

That sort of play happened too often in the second half. And that was the difference in a close game against a good team.