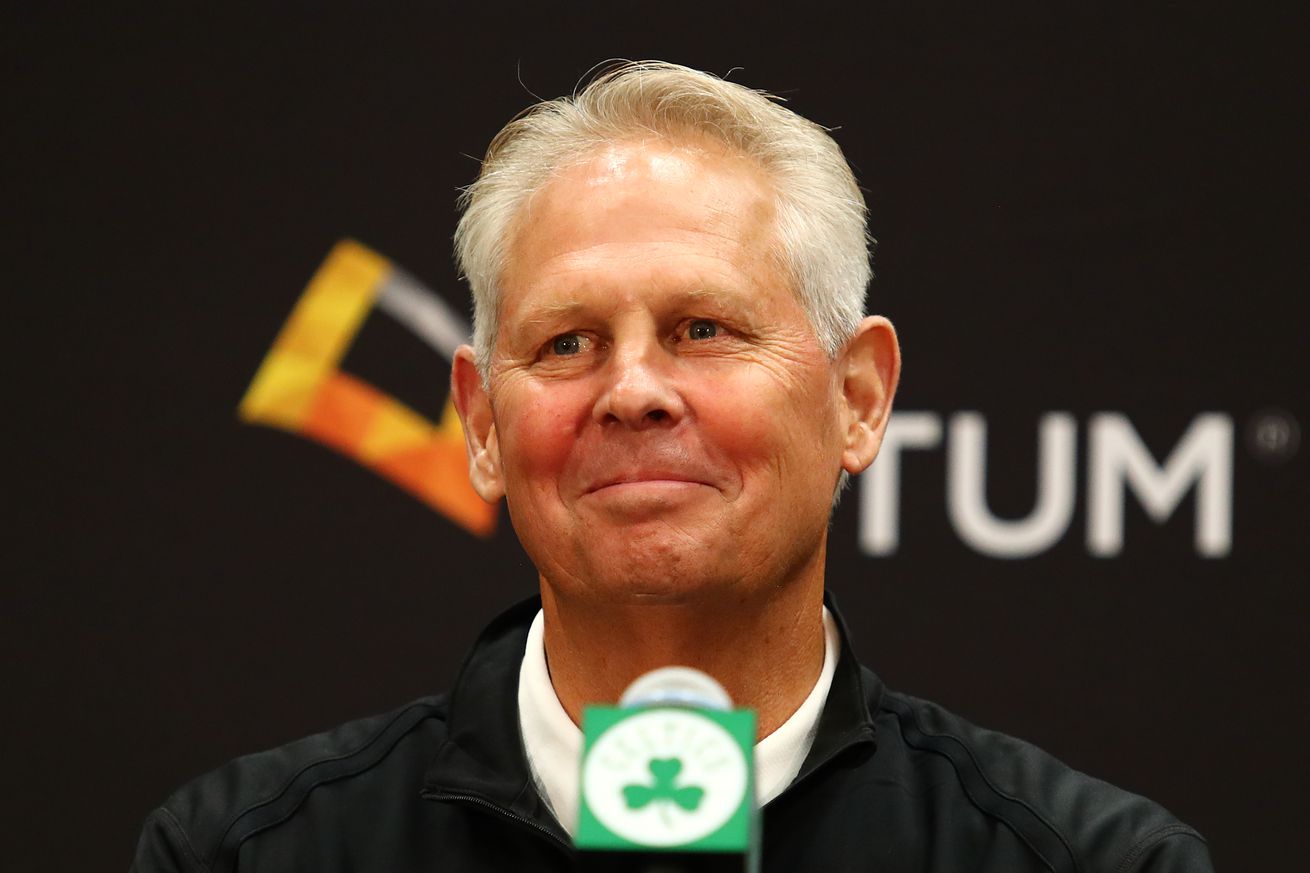 The Celtics don’t have a lot of roster flexibility, but still have decisions to make

At the end of last week, CelticsBlog covered what a lower salary cap/luxury tax could mean for Boston. With that in mind, the Celtics do have some work to do before the start of the 2020-21 season.

Let’s start with a qualifier: we don’t have any idea what is happening with the remainder of the 2019-20 season yet. That means we don’t know what the impact is on the 2020-21 season. If the 2019-20 season is resumed and pushes into July or August or September, the expectation is that dates related to the 2020 NBA Draft, player/team options, qualifying offers and contract guarantees will push back.

This batch of 10 Takeaways is going to presented in chronological order of deadline as they are today. If the date is the same, the order is done alphabetically by the player’s last name.

As it stands now, the Celtics project to have four picks in the 2020 NBA Draft:

– #17 via the Memphis Grizzlies

– #30 via the Milwaukee Bucks (via the Phoenix Suns)

– #46 via the Brooklyn Nets (via the Charlotte Hornets)

Boston will send their own second round pick to the Hornets. The #46 pick and Boston’s second were part of the double sign-and-trade swap of Kemba Walker for Terry Rozier this past summer.

The Grizzlies pick remains somewhat in limbo. Boston gets that pick if it falls anywhere between 7-30. When the season paused, Memphis had a 3.5 game lead for the eighth spot in the Western Conference playoffs.

The Bucks pick is about as locked in at 30 as it can get. Milwaukee has a three-game lead over the Los Angeles Lakers for the best record in the NBA.

The Celtics acquired the Bucks pick from the Phoenix Suns in exchange for Aron Baynes and the draft rights to Ty Jerome.

As for who Boston should draft, that’s very up in the air. It’s not a deep draft in stars, but teams are starting to convince themselves there are lots of potential rotation players. The challenge for Danny Ainge ultimately is roster spots. The Celtics already have several players under contract for 2020-21. They also added four rookies (Carsen Edwards, Romeo Langford, Tremont Waters and Grant Williams) at the 2019 draft.

Because of the roster crunch, and being wary of trending too young, look for Ainge to select at least one draft-and-stash player. That way the player becomes somewhat of an extra first round pick in the future. Ainge could also look to move or a pick two for picks in future drafts. This is a bit of a “kick the can down the road approach”, but could help re-stock the draft cupboard a bit.

This one deadline, more than any other, looms largest in how Boston’s offseason may go. Hayward’s player option is for approximately $34.2 million. If he opts in, he’ll have the second-largest contract on the Celtics, behind only Kemba Walker’s $34.4 million.

Despite it all, Hayward still gets beat up on a lot. If he has an off-game, the sky is falling and his contract is immediately brought up. If he plays well, it’s “Well, he should. He makes $30 million”. Such is life on a max deal.

If Hayward opts out and leaves town, the Celtics won’t have cap space. They’re over the cap with or without him. If he opts in, the team is certain to be in the luxury tax.

One other option exists that sort of splits the difference. We covered it here. The short version is that what might work best for both Boston and Hayward is for him to opt out, take less money in 2020-21, but add several years to his deal. That would give Hayward long-term security, while going a long way towards the Celtics dodging the tax next season.

Less impactful than Hayward, both on the court and the cap sheet, is Enes Kanter’s player option. If he opts in, Kanter would stand to make just over $5 million. That’s more than acceptable for a backup center, which is exactly what Kanter has been for Boston.

If Kanter opts out, Boston will need to add an experienced big. Robert Williams III has talent, but he’s not ready for that big of a role just yet.

This one comes with a bit of a twist that we’ll talk about a bit further down in the Takeaways. Ojeleye will be on the books for $1.7 million if Boston picks up the option. That’s more than fair for what he provides as an 11-12th man type.

Ojeleye has also shown some real signs of improvement. He’s playing with more confidence on the offensive end than ever and his defense remains solid. The only thing that could cause the Celtics to pass on their option for Ojeleye is roster spots.

To make Wanamaker a restricted free agent, Boston has to issue him a qualifying offer. A QO is a one-year deal. In Wanamaker’s case that amount to $1.9 million. Wanamaker can sign that one-year deal or he can negotiate a new contract with the Celtics or another team. If he agrees to terms with another team, he signs what is called an offer sheet. Boston would then have two days to match those terms or Wanamaker heads to the new team.

Wanamaker has become the Celtics backup point guard, but he’s best-suited for a role as a third point guard. You can always find those types of players, and Boston may already have one waiting in the wings.

Fall and Waters are grouped together, because the situation is exactly the same for both. Because both players were on the Boston roster for at least 15 days, the Celtics can make them restricted free agents. The process is exactly the same as outlined above for Wanamaker. The only difference is the QO for Fall and Waters is another Two-Way contract versus a one-year standard deal.

Fall could be open to going the Two-Way route again. That’s something the Celtics would likely welcome. It would allow them to keep him in the organization and to continue developing him, but not at the cost of a standard roster spot. And for Fall, he’s not likely to receive anything beyond a minimum contract offer anyway. It might be worth staying with Boston as opposed to starting over somewhere else.

As for Waters, he’s shown he has the ability to be on an NBA roster. It could come down to Wanamaker versus Waters for the third point guard spot. Given Waters is younger and has more upside, that’s a battle he should win.

Remember when we said there was a twist with Ojeleye’s team option? Here it is. If Boston exercises their option for Ojeleye, his contract still isn’t guaranteed. The Celtics have a few more days to make that decision. In a way, it’s almost like hitting the snooze button.

In all reality, if Ojeleye’s team option is picked up by the Celtics, they’re going to guarantee his deal.

When Theis signed a two-year, $10 million contract last July, it seemed like that deal was more about creating a tradable mid-range salary than it was about Theis as a player.

Now? Theis is Boston’s starting center. His $5 million contract for 2020-21 is fully non-guaranteed, but there isn’t any reason for the Celtics to let him walk. They’ll happily guarantee Theis that amount, as he’s become one of the better bargains in the NBA.

This one is cheating a little. Technically, the Celtics don’t have to do anything with Green’s deal until we’re into next season.

The main reason for including Green is that he’s the player most likely to lose a roster spot to a draftee. If Boston needs a spot, they can waive Green at no cost, since his contract is fully non-guaranteed.

Generally, teams add three to four non-guaranteed players for camp and the preseason. Because of Boston’s roster crunch, this one is going to be really interesting to watch play out. There could be real competition for one to three roster spots, which would bring a whole new layer of intrigue to the preseason.

If you have the means, please support CelticsBlog birthday by donating to the COVID-19 fundraiser we are partnering with The Boston Foundation on. Details can be found here.