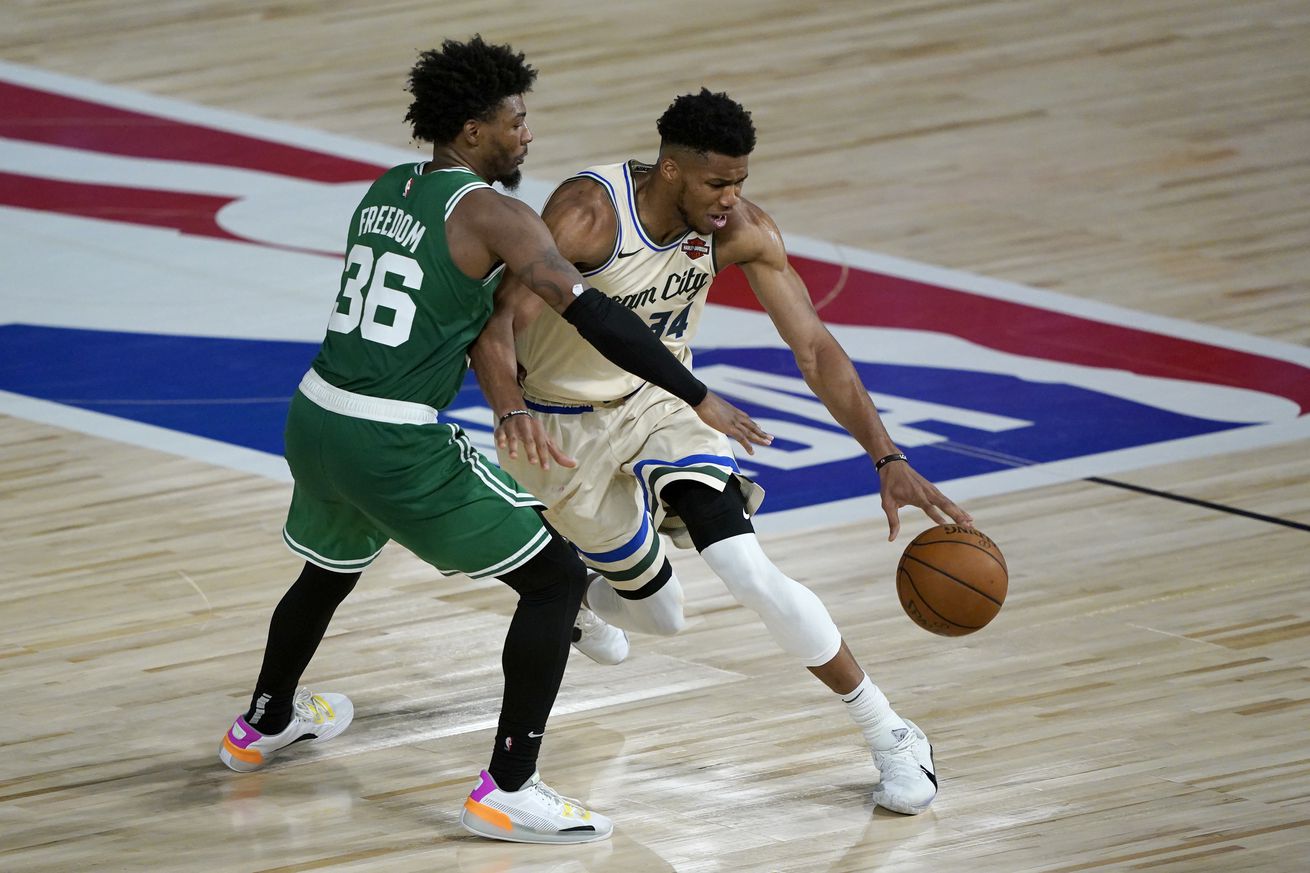 Marcus Smart is in mid-season form, on and off the court.

As it tends to be the case with Marcus Smart, he seems to always find a way to be in the middle of things.

That was the case again Friday night, even after the Boston Celtics fell to the Milwaukee Bucks, 119-112, in the first of eight seeding games as part of the NBA’s restart in the Orlando bubble.

Smart, who had a terrific performance sparking the C’s on both ends of the floor while scoring a team-high 23 points, didn’t mince words in his postgame press conference regarding the key overturned charge call late in the contest that changed the complexion of the game.

With 1:28 left to play and with the Celtics and Bucks deadlocked at 107-107, Giannis Antetokounmpo drove the lane, eurostepped past a defender and went up for a finger roll. The only problem for Antetokounmpo is Smart had the wherewithal to slide up and out of the restricted zone, meeting Antetokounmpo head on and taking a charge causing the Greek Freak to pick up his sixth and final foul.

But not so fast.

The officials went to the video monitor to review the play and determined that Smart was still sliding underneath Antetokounmpo as he went up for his shot and overturned the call, keeping Antetokounmpo in the game and giving him an enormous chance at a traditional 3-point play, which he converted.

It’s safe to say Smart didn’t buy the explanation he got from the referees about why the call was overturned and deemed it to be another case of a player of Antetokounmpo’s stature receiving superstar treatment.

“The excuse was I was late on the charge,” Smart said. “They said the replay center said I was late and it was a block. Quite frankly I think we all know what was about. Giannis (would have had) six fouls and they didn’t want to get him out. Let’s call a spade, a spade and that’s just what it is.”

Antetokounmpo had a chance to respond to Smart’s comments, but decided not to engage on the topic about the controversial call. Instead, Antetokounmpo praised Smart and also spoke about the respect he has for the way Smart plays.

Informed of Marcus Smart’s postgame comments about Giannis staying in the game because the refs didn’t want him to foul out, Giannis said that’s his opinion and then went on to praise Smart and speak at length about how much he respects him and his game.

For Smart, it seems like he hasn’t skipped a beat, bringing his tenacity on and off the court, despite the lengthy layoff.