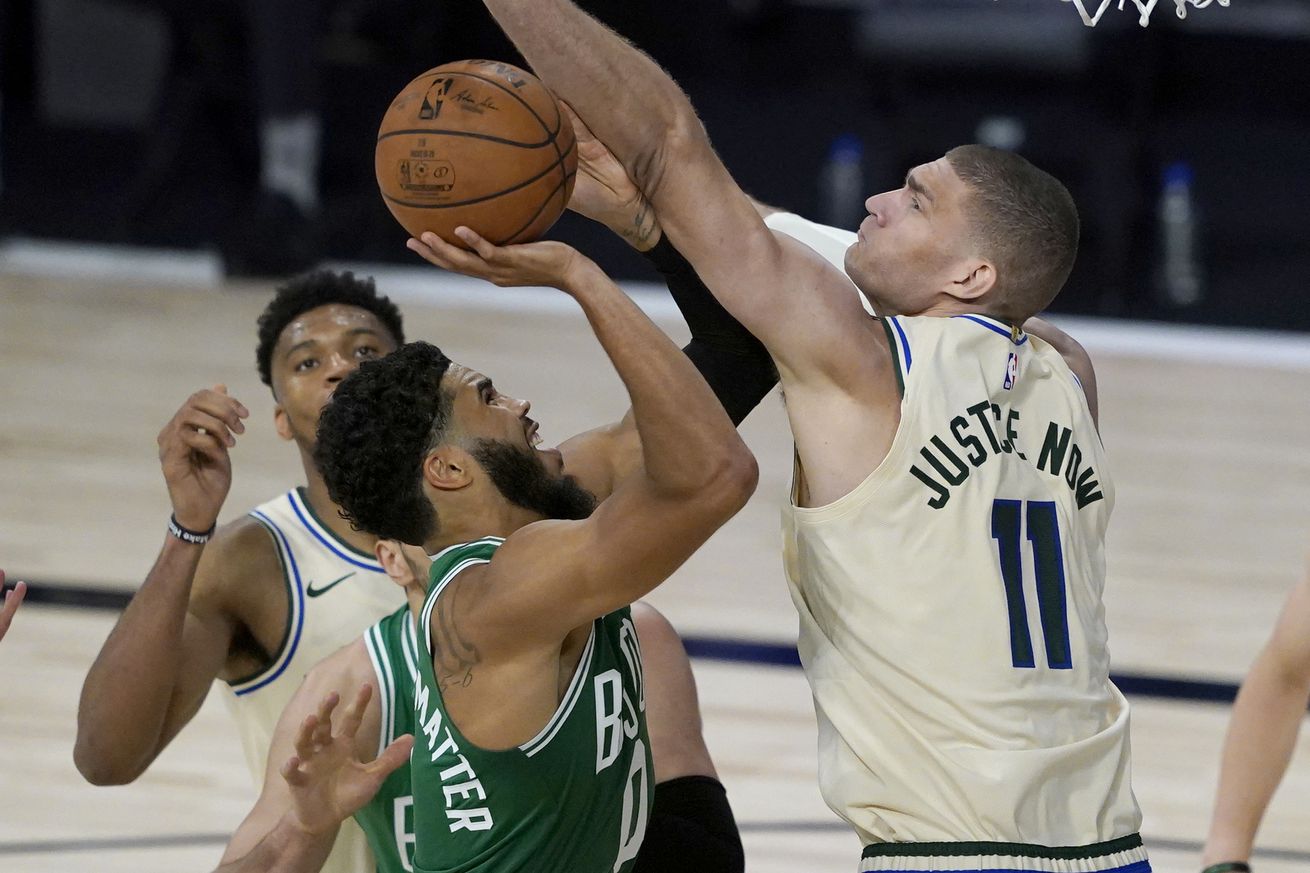 Boston was right there, but Milwaukee once again came out on top

1. Falling behind 17-2 was not how the Celtics saw this game starting. It was a nightmare start on both ends of the floor. Eventually, Boston battled back and even briefly took the lead a couple of time. But, like they did to start the game, the Celtics unraveled and the Bucks pulled away late.

The unfortunate part of the loss for Boston was they made it far too easy for Milwaukee both early and late. The Bucks scored 10 of their first 17 points in the paint. After the Celtics tied it at 107, the Bucks scored eight of their final 12 points off plays at the rim.

Daniel Theis battled inside, but he had little help from his teammates. It’s hard to stop Giannis Antetokounmpo in the paint, but you have to provide some resistance and shut down his teammates. Boston did precious little of either both early and late.

2. As is par for the course, the Celtics fortunes changed when Marcus Smart got in the game. Right away he made of a mess of things for the Bucks. Here’s Smart blowing up a pick and pop play with a steal and a fastbreak layup:

It ended up being more of a scoring night for Smart, so he had only one assist. But it was this gorgeous dime to Daniel Theis:

Smart is probably the only Boston player who makes and completes that pass.

On defense, Smart guarded everyone. He was part of harassing Khris Middleton into a rare bad shooting game against the Celtics, as Middleton made just 6-of-20 shots. Smart also took turns guarding Giannis Antetokounmpo. His greatest skills against the likely MVP are his quickness to beat him to spots and his ability to get up under Antetokounmpo. Here is an example of the second, where Smart again takes one to a sensitive place for the offensive foul on Giannis:

Smart thrived as a scorer (23 points on 7-of-11 shooting), in part by taking the pull-up jumpers the Milwaukee defense is designed to allow:

3. Daniel Theis is an important player against the Bucks. Because Milwaukee will drop their center on most actions, Theis has a chance to make plays from the perimeter. It’s not in his nature, but that may mean asking Theis to be a little more selfish as a playmaker versus being a ball-mover. That doesn’t mean become a gunner, as sometimes the passes open themselves up.

Here’s an example of Theis kind of playing the Al Horford role, where he could have shot, but sees the easy pass to Gordon Hayward instead:

Should these teams meet again, Theis is arguably Boston’s key player in that matchup.

4. Kemba Walker played 19 minutes, which was right in the middle of his 18-to-20 restriction. The Celtics could have used him down the stretch, but postgame Brad Stevens said he didn’t “consider putting Kemba back in. This is all about strengthening his knee for the playoffs”.

When he did play, Walker looked like himself. He was quick and explosive. Pull-up jumpers are there for Boston against Milwaukee. Fortunately for the Celtics, Walker is one of the premiere pull-up shooters in the NBA:

Make a couple, and the defense starts creeping up a touch. That opens up passing lanes like this:

(Sorry for the terrible angle. Please stop experimenting with these crazy angles NBA!)

5. Jaylen Brown had a solid offensive game with 22 points, including 7-of-9 at the charity stripe. Unfortunately, in a game where Boston could have leaned on him to play close to 40 minutes, Brown spent a lot of time in foul trouble. His fifth foul was especially troubling, because he picked it up 90 feet from the basket chasing an offensive rebound that he had no chance at. This was a case where the Celtics needed him to make better decisions to keep himself in the game:

6. After the game, Brad Stevens cited Brad Wanamaker as one of the players who helped get Boston back in it. Because of Kemba Walker’s minutes limit, Wanamaker played 26 minutes and he delivered. He scored 14 points on 5-of-9 shooting and also snagged six rebounds. A couple of times he tried to do too much, but overall Wanamaker was a positive, as his +9 in the box score shows.

7. The Celtics defensive communication has been poor thus far in the restart. It showed up in the scrimmages and again last night. Right before this clip starts, Kemba Walker and Gordon Hayward switched for no reason. That left Walker in a mismatch with Khris Middleton. Everything breaks down from there. Boston does a fairly good job of rotating, but Brook Lopez ends up with a wide-open corner three because the initial Walker/Hayward switch didn’t need to happen:

Later in the game, Hayward knew Brook Lopez had been a shot-blocking machine. In transition, he measured Lopez, drew him and left it for Brad Wanamaker for the easy layup:

9. Alright, we’ve ignored the elephant in the room long enough: Jayson Tatum could have jumped in one of Disney’s bass-stocked lakes and wouldn’t have hit a fish. He shot 2-of-18, but one of the two was actually a basket Milwaukee tipped in. It’s been a while since a real game, but 1-of-17 isn’t good, in case you needed a reminder.

Tatum was off all night. He missed short, he missed long. He missed jumpers, he missed layups. It was as bad a game as Tatum has played as a shooter/scorer. The good news? When this has happened in the past, Tatum has ripped off several good games in a row. That’s a pattern the Celtics hope continues.

10. A pattern the Celtics doesn’t hope continues is close, but no cigar against the Bucks. As has been the case for a while now, Boston is right there against Milwaukee, but can’t quite get over the hump. There always seems to be a reason. Usually it’s a key player missing the game, or in this one, Walker could only play limited minutes and Tatum was terrible.

Or maybe the Bucks are just better. If the Celtics want to raise Banner 18, it seems clear they’ll have to go through Milwaukee to do it. At full-strength, you still have to like Boston’s chances, despite coming up short in recent matchups. The Celtics style of play is great to go against the Bucks. If they play again, no more excuses if Boston can’t get it done.