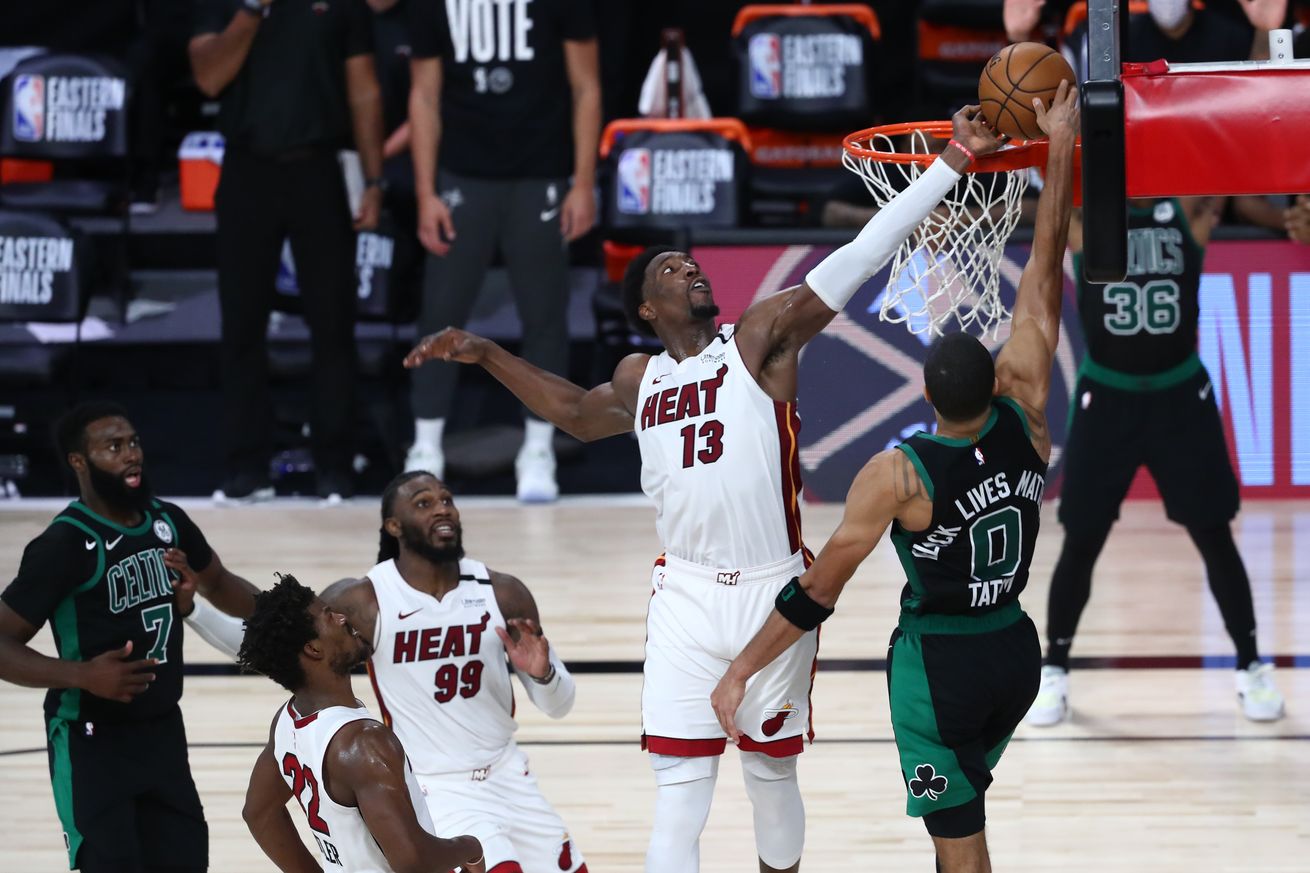 1. Following Boston’s disappointing Game 1 loss, Brad Stevens and several Celtics players were all asked versions of two questions. The first was “Why are you having so much trouble closing games?”

To this, Stevens said he thinks the Celtics go to too much isolation late and that the ball stops moving. He was also disturbed by Boston over-dribbling. As Stevens put it “We pounded it too much.” Kemba Walker, Jayson Tatum and Jaylen Brown all had similar thoughts, but put it on each of their own shoulders by saying they need to play better.

The second question asked was “Why do you have so much trouble playing with a lead?”

Stevens said he thinks the team gets away from what got them the lead. They lose focus on defense and the offense gets stagnant. Marcus Smart put it more directly: “We get complacent.”

Both closing games and maintaining leads are issues Boston has to figure out. Keeping big leads is probably easier. That’s a matter of focus. That’s unlikely to crop up multiple games n a row.

Closing games is where the Celtics will need to commit to running their offense. They have good offensive players, but too much iso-ball becomes easy to defend. Especially with a good team like Miami, who is excellent about loading to the ball.

2. A long-held belief around the NBA is that it isn’t a bad thing for Marcus Smart to get his first couple of jumpers to drop. If that happens, you know several more are going up. Smart finished Game 1 with 18 field goal attempts, 13 of them from behind the arc.

Unfortunately, as the game went along, Smart’s shot-selection got questionable. This was a “No. No. Yes!” shot from Smart:

A couple of trips later, it was even worse. Jaylen Brown was wide open under the basket and Smart was dead-set on launching this triple:

The first take is fine. A pull-up three in transition when you’re feeling good isn’t really bad. The second one was a rare selfish play from the Celtics most unselfish player.

3. Kemba Walker is always accountable for his play. He put it simply: “I’m just playing terrible.” Walker’s assessment is an accurate one. He was 6-of-19 from the floor and missed several open jumpers. Walker also didn’t seem to have the burst to get by players Goran Dragic or Tyler Herro either. Both Walker and Brad Stevens say Walker’s knee is fine and not an issue. That removes a reason for the struggles. Sadly, that leaves it down to this simple fact: Walker has to be better for the Celtics to win.

4. Jayson Tatum wasn’t unhappy with either of the big shots he took in the game. Tatum felt like he got a good look at the end of regulation:

The feeling here is that Tatum is correct. While a lot of people screamed that he should have drove, he was never getting anywhere on a drive. Derrick Jones Jr is just as quick as Tatum is and he’s a good defender. Both Andre Iguodala and Jimmy Butler were cheating over to help as well. It was a good shot, one Tatum makes with regularity, that just missed.

At the end of overtime, Tatum did drive the ball, but we’ll cover that more later in the Takeaways.

5. Leading up to the series, Brad Stevens praised Miami for a lot of things. The number one thing that kept coming up was his love for their cutting. Stevens called the Heat the best cutting team since the Golden State Warriors, which is very high praise.

Miami’s players are experts moving off the ball. Because both Bam Adebayo and Kelly Olynyk are gifted passers, they pull the rim protectors out of the paint. That opens up cuts for layups like this one from Tyler Herro:

Later in the first half, Adebayo dimed up Jimmy Butler, who caught Jaylen Brown ball-watching:

6. Rotations were somewhat of an issue for Boston in this one. Brad Wanamaker was solid off Boston’s bench, but Grant Williams, Robert Williams and Semi Ojeleye all struggled some. In the first clip from Takeaway #5, Stevens had Ojeleye, Wanamaker and Grant Williams all on the floor together. That’s probably not going to fly. Stevens needs to re-look at who, when, and how he can steal rest for his starters without playing three reserves at once. At least until Gordon Hayward gets back and he can go back to his normal rotations, with two of Hayward, Jaylen Brown, Jayson Tatum and Kemba Walker on the floor at all times.

7. What happened to Jaylen Brown? He started off the game extremely aggressively. Brown was getting into the paint and making nice passes, drawing fouls and scoring himself. Then… he just kind of disappeared.

Brown didn’t see the ball as much, as Marcus Smart got a little shot-happy and Boston was trying to get Kemba Walker going. But on a few plays when Brown did get the ball, he looked tentative and unsure. That’s a marked difference from the usual confidence he plays with.

Also, this was one of Brown’s worst defensive games. Miami caught him ball-watching and back cut him several times. He had a couple of bad fouls as well. Overall, Brown just seemed out of sorts.

8. Duncan Robinson picked up two early fouls, and as odd as it seems, they may have thrown Boston off more than Miami. Erik Spoelstra went to Tyler Herro, and he was terrific off the Heat bench. Herro just missed a triple-double.

For the Celtics, it seemed to throw them off of their defensive matchups. Early on, they were switching everything, but only when forced. Kemba Walker had Robinson, which left Marcus Smart to guard Goran Dragic. When Herro came on, Boston flipped Walker to Dragic, and Dragic was able to get going. It seemed to be an odd case where early foul trouble for the opponent actually helped them get going.

9. Daniel Theis’ final stats won’t blow anyone away, but he was one of the Celtics best players. Well… for the time he was out there at least. Theis fouled out, but was a game-high +12 for the Celtics. From when he was disqualified early in overtime to the end of the game, Miami outscored Boston 11-4.

The Celtics need Theis on the floor. He gets called for some ticky-tack fouls to be sure, but he also gets caught with his hand in the cookie jar a lot. The Heat have skilled foul-drawers in Jimmy Butler and Goran Dragic. Boston can’t afford for Theis to be giving away fouls against them, especially on switches out on the perimeter.

It’s a great decision by Tatum to drive and go as hard as he possibly can. This block from Bam Adebayo is one of the best in NBA Playoffs history. It’s incredible timing and great use of his left hand to avoid fouling.

For the Celtics, they’re now down in a series for the first time in these playoffs. While it’s discouraging that Boston blew a 14-point fourth quarter lead, and is still struggling to close games, there are some silver linings.

Miami won by just three, in overtime, in a game where Kemba Walker and Jayson Tatum combined to shoot 16-of-43 overall and 5-of-21 on three-pointers. Even when Smart comes back to earth somewhat, Tatum and Walker playing to their established levels will more than offset it. Jaylen Brown is also unlikely to go AWOL for a second game. And Gordon Hayward’s return is looming. No one from the Heat really played under their capabilities either, and several players shot it better than expected. It’s going to be a fight, but the Celtics should be able to get back in this series, and probably as soon as Game 2.