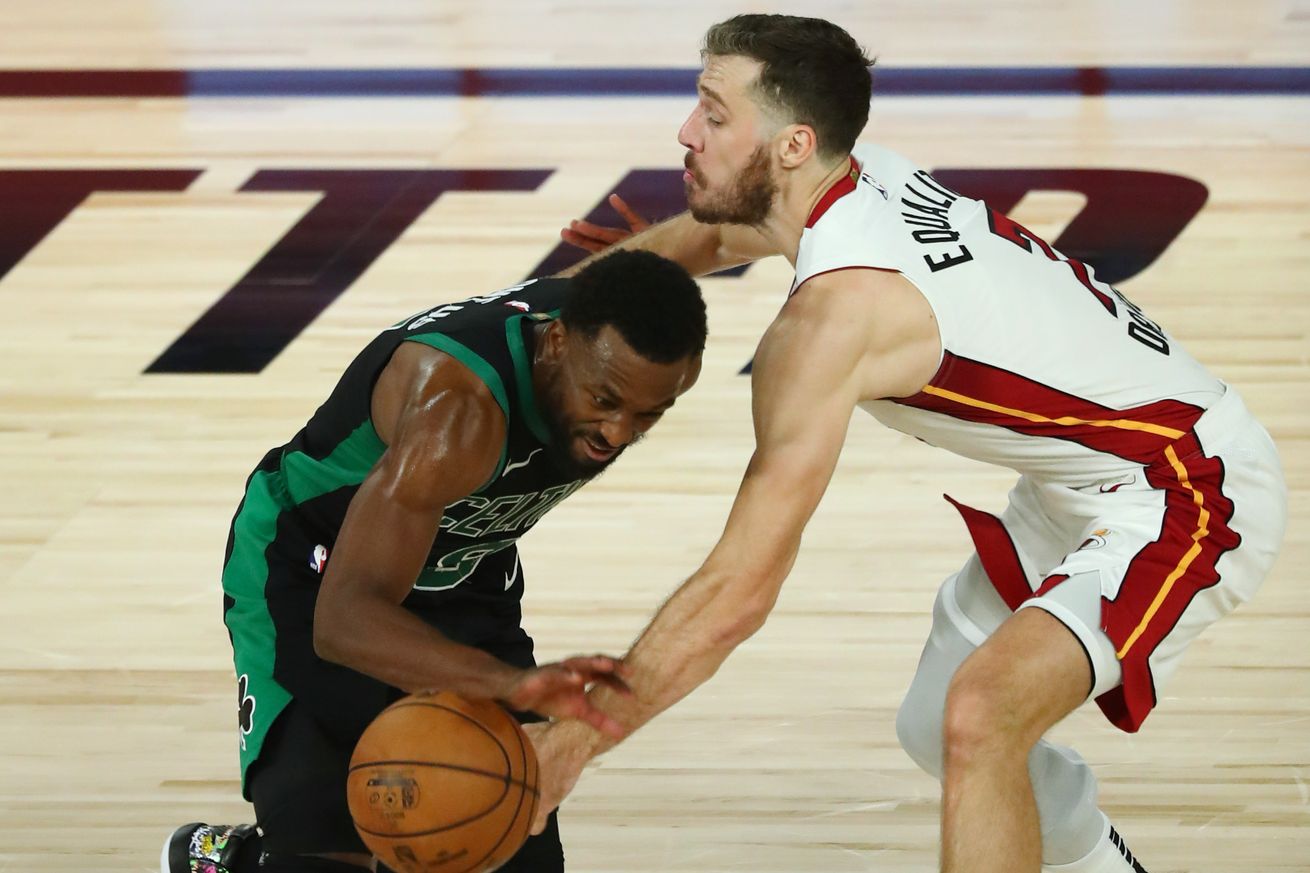 Kemba was stymied out of the pick-and-roll, but his teammates stepped up and made shots.

Once again, it was another playoff game where the Celtics will come away scratching their heads wondering what went wrong. The Celtics were up double digits in the fourth quarter, and it slipped away resulting in a 116-113 overtime loss in Game 1 to the Miami Heat. It happened before in the last series when the Raptors hung around to steal a few games, and it happened again in Game 1 in the Eastern Conference Finals.

One big takeaway from Miami’s early strategy is how they handled Kemba Walker in the pick-and-roll. The Heat are blitzing Kemba, sending a quick double team at him trying to make him uncomfortable. This is something Miami has done multiple times this season where they rely on their athleticism from their roster to blitz the ball handler and recover as quickly as possible if a pass is made. They established this strategy early on, but the Celtics were able to counter it often.

When the Heat threw the second defender at the ball handler, the Celtics did a great job of passing it around the floor making the Heat try and recover. It’s similar to a hockey power play where the puck is whipped around until the defense cannot shift over quick enough resulting in a clear shot.

Here, Kemba gets blitzed and double teamed beyond the arc. From there, it is just finding the open man. Brad Wanamaker comes over to help Kemba with the double, then his man comes off of Grant Williams, and Williams hits the open corner three-pointer. Miami is hoping that by taking out one of Boston’s best offensive players, they can gamble on the supporting cast making shots.

Even in a Game 1 loss, the offense was able to find open shots that created points that built their leads throughout the night. Again, this clip catches the tail end of Kemba being doubled and dishing it off to Marcus Smart. Then, Smart finds Wanamaker cross-court who then kicks it over to Brown to bury the shot. It sets up some beautiful team basketball that the Celtics can exploit. It results in a roster full of three-point shooters having open looks as the defense rotates over.

The small downside is that this defense scheme throws Kemba off his game once again in a playoff series. He cannot create any kind of rhythm being blitzed at the top of the key and forced to pass the ball. However, Kemba is still a willing playmaker which can still get him in his element. He always knows how to distribute and make extra passes to set his team up for success.

However, the difficult part about passing out of a double is that it normally not the slick passes Kemba is used to. Like in the two clips shown, it is more falling backwards trying to get the ball out of trouble. It would be best if he found a rhythm outside of being doubled, but at the end of the day, the Celtics know they can trust Kemba to distribute it out initiate the tic-tac-toe passing to set up open shots.

In the upcoming games, we will see what the Heat do with blitzing Kemba or other ball handlers to stall the Celtics offense. It definitely throws the Celtics out of their sets they were running to start, but it then sometimes opens up the passing lanes to lead to open shots.

The Celtics live and die by the three-pointer, so any kind of separation can be crucial to build a lead. This is just one of the strategies the Celtics will work on before Game 2, but after their adjustments they will be ready to come back and even the series up at one win a piece.