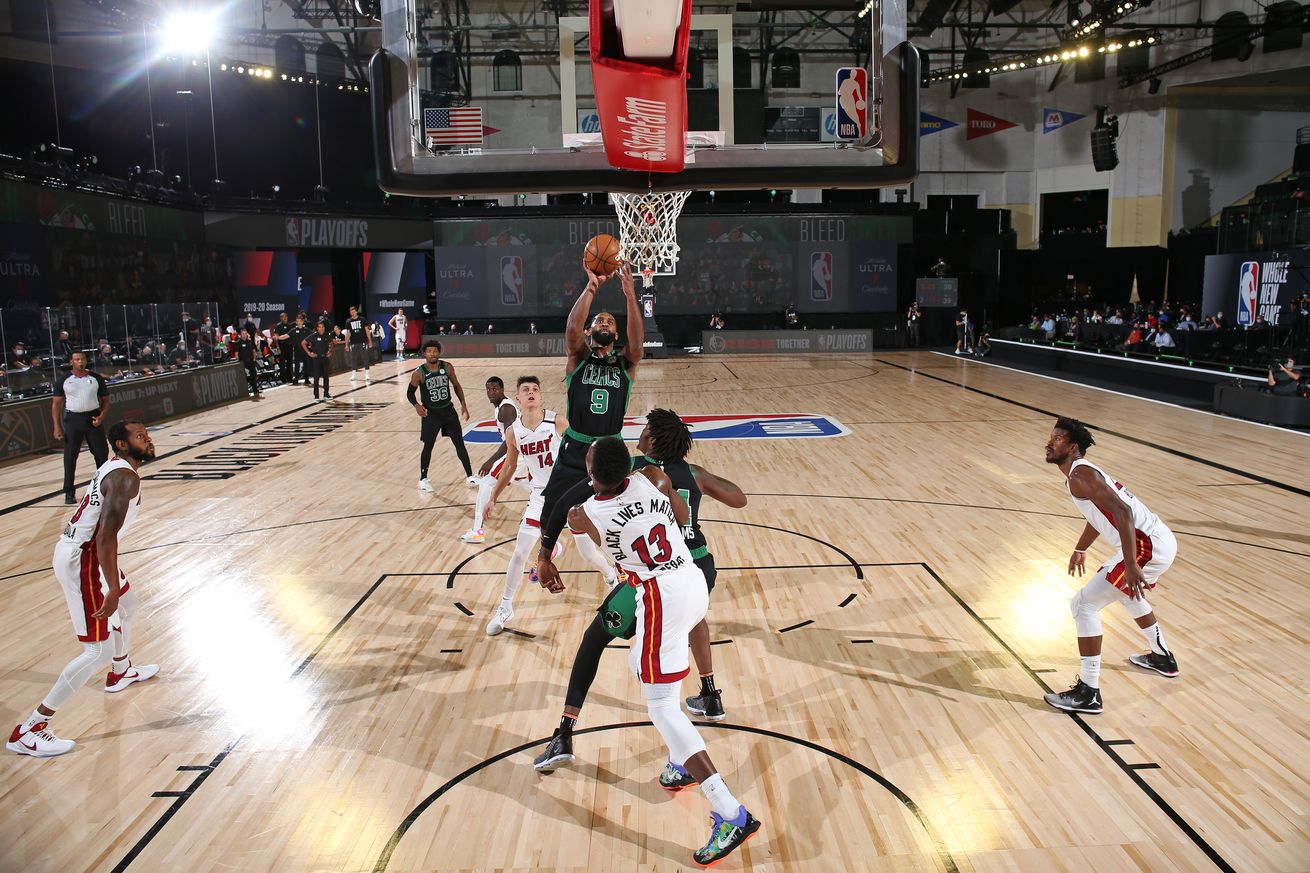 The Celtics fell in a tough overtime loss against Miami on Tuesday night, with Kemba Walker struggling to find any form of consistency. Luckily for the Celtics, Brad Wanamaker has chosen the perfect time to produce at his optimal level after coming off an impressive series against the Raptors.

In 25 minutes on the floor, Wanamaker provided the Celtics with an energy boost off the bench. Finishing the contest with a game-leading five steals, a joint team-high six assists, and going a solid five-for-five from the line, Wanamaker was getting his work done in the trenches.

Never one to catch the eye with a highlight play, the bulldog-built guard goes about his work in an understated (and usually underappreciated) manner, doing whatever the team needs. On Tuesday, that role was an offensive catalyst, and the 2018 Turkish league champion seemed well-suited to the assignment.

His drive heavy offense was precisely what the Celtics needed as he used it to draw fouls and facilitate his teammates.

This assist personified the value Wanamaker was bringing to the floor. A hesitation crossover on Jimmy Butler created a 45-degree driving lane for Wanamaker to exploit. Using his speed and strength, the 210lb guard bulldozed his way into the teeth of the defense waiting for it to collapse on him. Instantly recognizing Bam Adebayo stepping into the paint, Wanamaker threatens the layup before rocketing a pass into the hands of Robert Williams for the easy two-handed dunk.

Another element of Wanamaker’s playmaking was his willingness to act as a pivot point for the ball movement. Brad Stevens stresses making the right basketball decision and that means receiving the ball and instantly swinging it out to its next destination if you don’t have a good look. That allowed the Celtics to consistently find the open man against a very aggressive Heat defense. No less than two of Wanamaker’s assist came from this type of play, allowing the Celtics to gain an easy six points.

Above is the “extra pass” assist for Grant Williams, and below is almost a carbon copy for a Jaylen Brown trey, except this time, Wanamaker is facilitating from the corner.

The second-year guard redirects the ball to the open man on both of the above plays, affording them time to get their shot off uncontested. Selfless basketball. Celtics basketball.

Outside of his assists, Wanamaker impressed with his active hands on defense, forcing loose balls while fighting for possession on every defensive trip.

Shortly after his second assist, the 31-year-old showed his gritty side, hustling to pick off a post entry pass and following it up with a bounce off Butler to retain possession. Granted, the dish from Andre Iguodala was a feeble one, but Wanamaker’s hustle kept the possession alive.

When the Celtics needed a stop, Wanamaker was on hand, killing plays in transition or on the low block, even pilfering the ball from Adebayo down the stretch.

For a player who many deem boring, this play would undoubtedly have got people out of their seats at home. Ghosting in for the strip on Adebayo, Wanamaker proceeds to take the ball coast-to-coast and finish at the rim with his reliable layup. Sure, it wasn’t a highlight dunk, and there wasn’t a thunderous lob pass, but that play served as a momentum builder.

On offense, Wanamaker had found fleeting success when driving to the rim, with all three of his made attempts coming within four feet of the basket. Scoring around the basket should come as no surprise for Wanamaker; throughout the regular season, 40% of his shot attempts came in that vicinity, and he converted on 64% of those attempts.

With the Heat defense keying in on Walker to limit his scoring opportunities, Wanamaker was able to find space and attack it.

Above, Wanamaker gets the reverse layup to fall and draws the and-one on former Finals MVP Andre Iguodala. Using his frame and crafty change of pace allows the journeyman point-guard to use the rim to protect himself from the block before getting the easy bucket to fall.

Throughout the playoffs, Wanamaker has averaged 5.3 points, 2.3 rebounds, and 1.8 assists on 44/91.7/42.9 shooting splits – all while only playing 16.7 minutes per game. With his contract situation still to be resolved (Wanamaker will hit unrestricted free agency if the Celtics don’t extend a qualifying offer), there was never a better time to hit top gear.