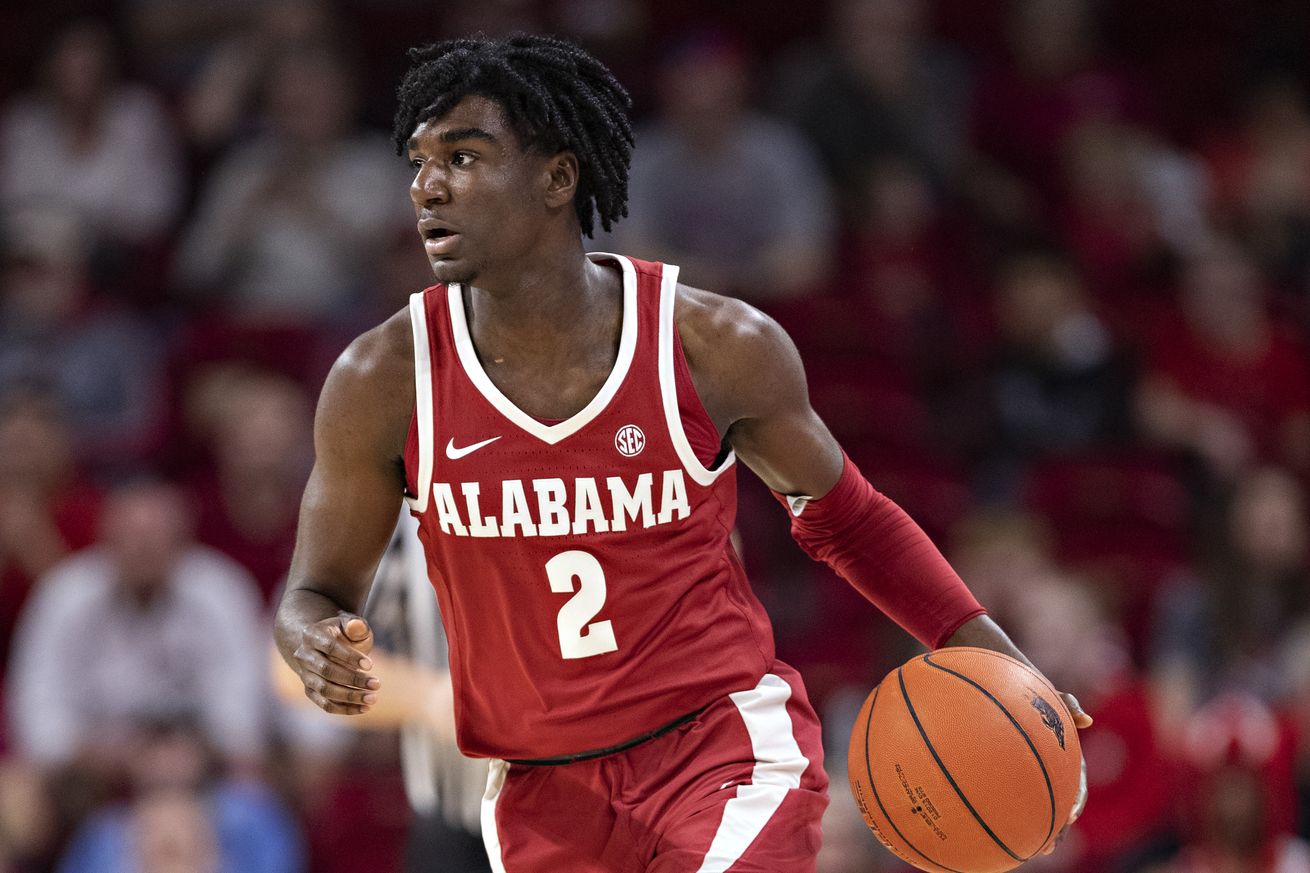 The Celtics stagnated far too often with their second unit on the floor. Kira Lewis Jr. would change that.

Throughout the season, one thing became apparent: the Celtics lack size! Now, I’m not talking about the frontcourt. My focus has become fixated on the backcourt. This year’s roster consisted of a Russian doll rotation of guards, each one gradually smaller than its predecessor.

When the Toronto Raptors and later, the Miami Heat targeted Kemba Walker, the Celtics didn’t have the personnel to change their game plan. Instead, they would rely on Brad Wanamaker to provide steady minutes in the same offensive system. Quite frankly, the Celtics guards were too similar to ever be effective game changers at this level.

New additions are necessary, and while I’m all for acquiring a veteran piece with championship experience, I also understand the value of the draft. Additionally, with Kemba Walker earning a king’s ransom over the next few years, spending big on yet another guard could be the Celtics’ downfall. All of these points have led me down a particular path: the Celtics should look towards the draft for their back-up point guard.

Luckily for Boston, this draft has multiple serviceable guards littered throughout both the first and second rounds. Inevitably, when looking into the draftees, I became smitten with a particular individual’s skill set.

For me, Kira Lewis Jr. projects as the ideal fit for the Celtics bench. At 6’3’’ with a 6’6 wingspan, Lewis ticks the boxes of size and length. It goes so much deeper, though. Let’s explore.

Lewis Jr. is unequivocally the fastest guard in this draft, blowing by guys with his lightning-quick speed reminiscent of The Flash. The Celtics were by no means a lousy transition team this year, attacking opponents an average of 17 times per game on the break. But with Lewis Jr. in the rotation, the Celtics could look to push the pace even further, leaning on the young guards’ speed and decision making around the rim to garner some easy points in the open floor.

In terms of transition-based offense, Lewis Jr. would be an enormous upgrade on the Celtics current roster. Kemba Walker ranked in the 13th percentile for transition; luckily, Brad Wanamaker shouldered the load in this area – ranking in the 83rd percentile.

Ask yourself this: Wanamaker is already entering the latter years of his career. How long can the journeyman guard sustain being the team’s primary option in the open floor? Sure, Jayson Tatum has the legs and scoring ability to operate on the break, but his dribble control at speed is questionable at best. Jaylen Brown is a better option here, but a team needs diversity to avoid becoming predictable.

That’s where Lewis Jr. steps in – ranked in the 79th percentile for transition plays during the shortened collegiate season – averaging 1.2 points per possession. At just 19-years-old, there’s every reason to believe the Crimson Tide alumn will develop into one of the most fearsome transition threats in the league sooner rather than later.

And then we have my favorite aspect of Lewis Jr. running the break – his passing at speed. If you run the floor with him, he will find you with swing passes, dump-offs, or lobs – he loves to hurt teams when the defense isn’t set.

Imagine Tatum and Timelord running the open floor with Lewis leading the way. There would be so many accessible opportunities both at the rim and on the perimeter.

The Alabama native projects as an exceptional scorer off the dribble, in motion, spotting up, and around the rim. Quite simply, he can get buckets in whatever way he wants.

Catching the ball while in a “run through” motion similar to Jaylen Brown, Lewis Jr. ensures he’s already in action when receiving the ball, allowing him to use that momentum to beat his man straight off the dribble.

There’s also his gather step, where the young guard likes to take the ball high and rip through to throw his man off guard, leading to some easy pro-step and euro-step finishes when operating downhill.

The Celtics sorely need a multi-faceted scorer who can facilitate and get his looks from numerous areas of the floor. In Lewis Jr., they would have a secondary guard capable of galvanizing the offense when Walker went to the bench.

There are questions around the youngster’s ability to finish through contact and his questionable love for the scoop layup – something Markelle Fultz tends to lean on – but these are all fixable aspects. Furthermore, I adore that Lewis Jr. hardly ever uses isolation plays to get his buckets, opting to operate within the flow of a system, making him a dream fit next to the Celtics budding stars long term.

Off-ball offense is also a projected strength for the 167-pound guard, as he makes use of pin downs and sharp cuts to find open lanes or spot up opportunities on the perimeter.

The guy is a pest, an utter nightmare to contain, and a blur when he chooses to turn on the jets. Against a zone or tough man defense, Lewis Jr. could be the catalyst for a second unit that’s stagnated far too often this past season.

The biggest knock on Lewis Jr.’s defense is his inability to fight through contact, consistently taken out of plays pff screens and tags. The limitations caused by the incoming rookie’s contact defense project to make him a target when operating as an on-ball defender. While contact will be easier to absorb as he grows into his frame, the on-ball defense will be a problem from the jump.

The way I see it is this:
– elite speed (transition points and break down D in HC)
– (sub?) elite passing SKILL (though not vision) that becomes more lethal because of speed
– can play on/off ball on offense
– he competes on defense and is a smart team defender

Speed, desire, and wingspan – these are all tools the 19-year-old guard possesses that will ensure his off-ball defense limits the impact of his on-ball struggles. Projecting as an excellent denying guard, limiting passing lanes while boasting the athleticism to close out and alter shots with ease, there is every reason to believe Brad Stevens could elevate Lewis Jr.’s defensive game over the next couple of years.

I am curious to see how playing alongside intelligent defenders such as Marcus Smart and Grant Williams can impact Lewis Jr.’s defensive game, too. There’s also a point to be made that being on the floor with those two and maybe Romeo Langford could afford him some development time as an on-ball defender, unlike what he had in Alabama.

It’s true the Celtics already have a bevy of guards on their roster, yet they’re either too similar or too limited to help push this team towards the next level. There is also an argument to be made that the Celtics should be looking towards a big in the draft – I get it, and I agree. However, in the modern NBA, serviceable bigs are found towards the end of the 1st round unless they project as an All-NBA talent, making Lewis Jr at #14 an even more desirable option.

In his latest mock draft, The Athletic’s Sam Vencenie wrote:

“He was remarkably productive for having played the majority of his sophomore season at 18 years old. More importantly, though, he started to slow down and become an even more impressive halfcourt distributor and playmaker. His live-dribble passing took a leap this season, and I think that would mesh well within this offense. Most importantly, I think he can play off the ball, too, due to his shooting ability, meaning he can play both the backup point guard spot and with the starters given how much Tatum figures to keep transition into an on-ball wing in future years.”

For me, Lewis Jr can solve more problems for the Celtics than what he would create. The Celtics could then allow Walker to continue as the starting guard while slowly developing his eventual heir; the fact that Lewis Jr. can contribute right off the bat is just a bonus.

If you would like to look into Kira Lewis Jr further, Coach Spinella has produced some excellent breakdowns.