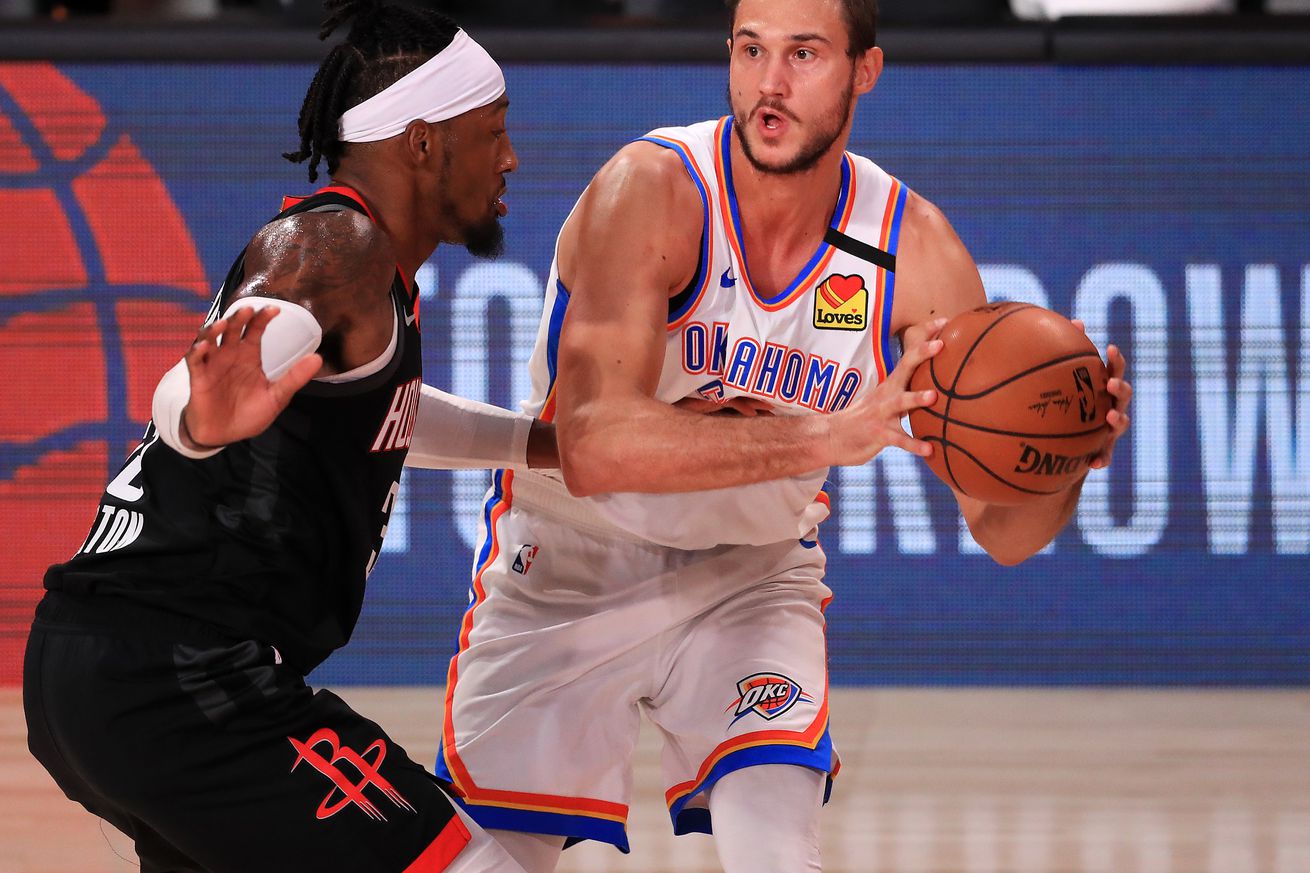 The Celtics are the underdog in the Gallinari sweepstakes, but he would elevate the team’s chances of a championship next season.

In the weeks since the Celtics’ exit from the NBA Playoffs, suggestions to improve the team have become ubiquitous in both media and social media circles. “The Celtics need more size,” “They should trade Gordon Hayward.” “The bench is too young.” “They need a veteran.” These siren songs of the offseason are like the repetitive din of a well-worn drum; each percussion numbs your perception until it’s nothing more than background noise to this basketball-less fall.

Narratives ebb and flow like the fluid nature of the NBA off-season. Every press conference, every quote, every piece of workout footage all evoke a sense of new possibilities.

Boston’s ability to acquire a veteran capable of elevating the team on the floor and in the locker room received an enormous boost on Monday night. A quote surfaced from Oklahoma City forward Danilo Gallinari, a passage in which the 32-year-old discussed the possibility of taking a pay cut to play for a contender.

“Is playing for the NBA Championship more important than a contract? Yes. At this time, yes. I’m not twenty anymore.”

A new type of veteran seems within reach: the ring chaser.

Gallinari would be the quintessential pickup if the Celtics were to sign him. Standing at 6’10’ with a 7’5 wingspan, the former Italian league MVP would add much needed size and length to the Celtics roster. For Boston to obtain a player of Gallinari’s stature, he would quite literally need to put his money where his mouth is, signing for the MLE to chase a championship.

On offense, Gallinari would bring some much needed reliable scoring – specifically from beyond the arc. Throughout the 2019-20 season, Gallinari registered 382 non-corner three-point attempts, converting 41% of them per Cleaning The Glass.

Operating as a stretch-4 for the Thunder, Gallinari’s presence at the break provided Steven Adams the spacing necessary for his patented rim rums – something which could further unlock Boston’s own rim runner in Robert Williams.

When you’re automatic from deep, teams will inevitably try to run you off the line. Gallinari has perfected his high-post moves along with finding consistent success with the much-maligned long-two.

Gallinari is adept at creating scoring opportunities out of man-to-man situations, using his height and strength to score over his man or seal him on his hip as he begins to drive. Another more underappreciated aspect of Gallinari’s game is his ability to move off-ball.

The Thunder asked him to drift baseline undetected with regularity, offering some accessible scoring opportunities at the rim. However, Gallinari can operate as the decoy in set plays, cutting or flaring with meticulous precision. This type of movement can generate looks for either Gallinari or his teammates.

Then there’s the defensive end of the floor. Gallinari is by no means an elite defender. Yet, he operates at a level beyond serviceable. Basketball Index has Gallinari splitting his time on defense between spot-up wings, versatile bigs, and pick-and-pop big men – in short, he would guard opposing bigs that usually cause the Celtics heaps of trouble.

Gallinari also brings a reliable presence on the glass, averaging a shade under five per game. However, if we’re honest, you don’t acquire Gallinari for his defense or rebounding – it’s his scoring that entices you; the rest is just icing on the cake.

The real question becomes Gallinari’s viability as a legitimate option for the Celtics to pursue. If the 6’10’ big man is genuinely enamored with contending, then there will be multiple teams who fit the bill.

The Los Angeles Lakers, Milwaukee Bucks, and even Miami Heat all have the full non-taxpayer MLE. It’s fair to argue that both Milwaukee and Los Angeles also have better opportunities for immediate contention than the Celtics as currently constructed.

The teams mentioned above would have the ability to extend Gallinari a contract offer in the region of $9,258,000, while the Celtics would max out with the Taxpayer MLE of $5,718,000, making them the underdogs in this race.

Should the Celtics strike gold in the Gallinari sweepstakes, the next questions are how much he plays and where. Gallinari is taller than both Daniel Theis and Robert Williams which provides the team with an opportunity to fully embrace a five-out offense without sacrificing size the way the Houston Rockets did.

In a league where elite big men dominate with their multifaceted approach, the best counter is creativity, making Gallinari at the 5 an intriguing prospect to explore. Throughout his career, the former EuroLeague rising star has spent just 2% of his NBA career at the five, so it might take some convincing from Brad Stevens to get Gallinari to buy in to this positional change.

Alternatively, Gallinari could slide down to the small forward position or dislodge Jayson Tatum at the power forward slot, pushing Tatum down to the three. Neither of these options is a great choice. Tatum had a breakout season at the four position and has made it his own. At the same time, Gallinari at the three could produce an unbalanced offense due to his shortage of pace and limited ability to consistently beat his man off the dribble.

Irrespective of where Gallinari would slot into the Celtics lineup, he would provide a veteran presence with elite scoring to elevate the roster into genuine championship contender status. This year, Stevens was able to stagger his four stars between the starting and bench unit. By adding Gallinari to the mix, Stevens could dive deeper into that stagger rotation, ensuring the team consistently has elite scoring on the floor – something the team sorely missed when one of the stars sat due to injury. The only question is if Gallinari considers his presence on the Celtics roster enough to cement the team as the Eastern Conference’s representative in The Finals.