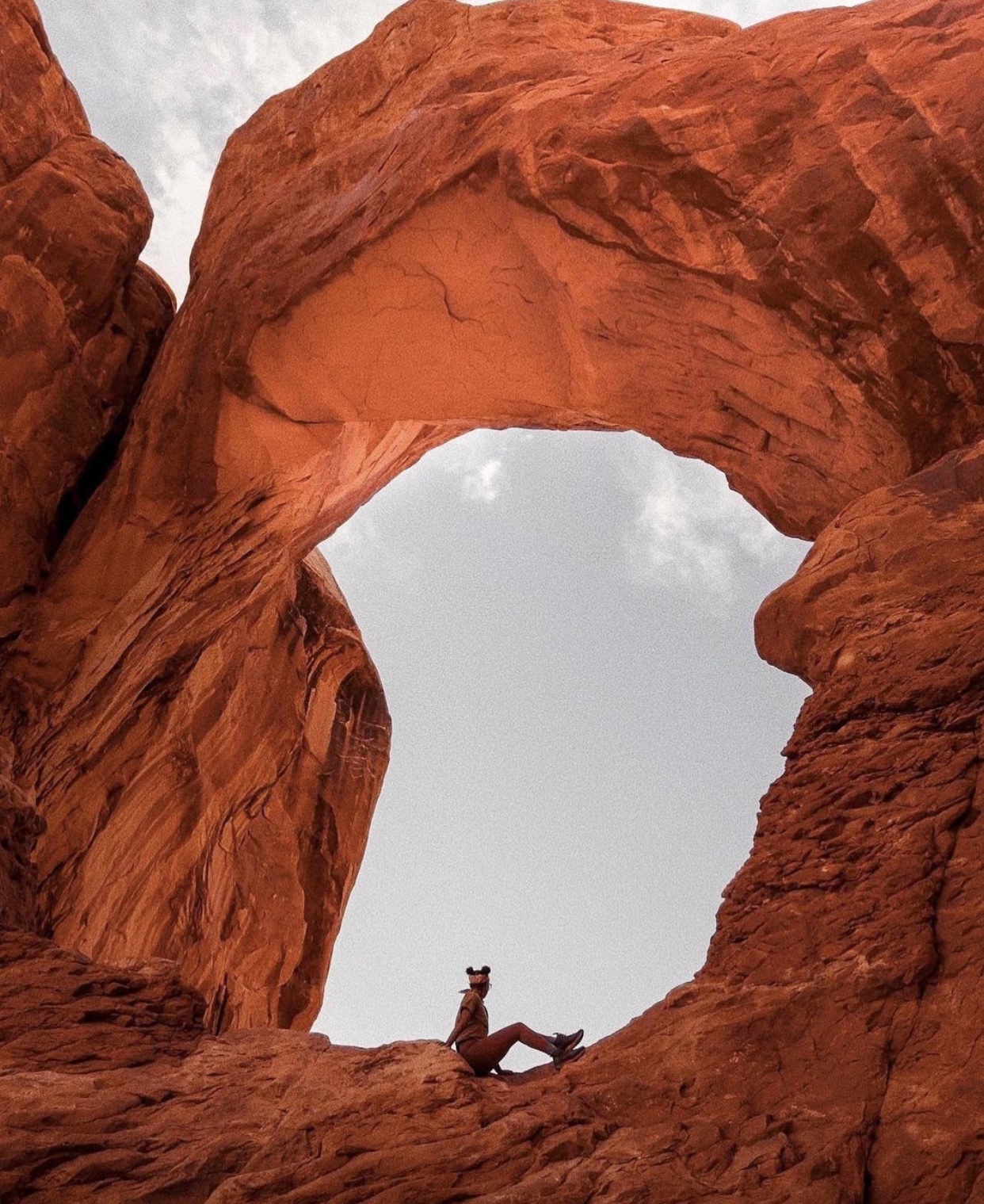 visual storyteller @wildginaa has an instinct for elevating the dramatic natural beauty of her photographs into works of fine art. © @wildginaa

Everyone has a coming of age story, and mine just so happens to involve impromptu road trips over the last few years that unraveled some awe inspiring moments too poetic not to share with the internet. Emerging into adulthood meant less about finding myself and more about creating my own way, which of course came with its own unique challenges. Having the privilege to explore, hike, and travel to cities around New England provided the catharsis I was searching for and as a writer and an artist it was inevitably in my nature to want to write about it. I fired up a wix website and began a series of travel writing essays in order to detail my connection to the world and just like that I found my niche. My writing began in the beginning of this year (before everything went to shit—excuse my French), but then something happened that ushered me to a screeching halt: another murder of a Black man by the hands of police. Between the pandemic, corruption running amuck in this administration, and political unrest amongst the streets of every town and city across the nation, it did not just appear untimely to continue writing about gallivanting through the trees, it felt downright wrong. I had work to do within my community and online: helping with the fight for justice and continuing to educate myself and figure out how I could be an ally.

The hiatus allowed me to reflect on my own white privilege, and I return to my laptop and to this writing project a changed person, one who can never write about the outdoors again in the same way. Why, you might ask? Because certain things became abundantly clear over the last several months pertaining to the outdoors and the Black Lives Matter Movement; it is not new information but something that must continue to be bolded, highlighted, and underlined: outdoor recreation as we know it is racist. I want to tread carefully here, so as to not come across like I am whitesplaining such a sensitive topic to many marginalized communities, but allow me to have a quick think piece on the matter.

I know the immediate reaction for some is to find this preposterous, with many thinking, “How can the outdoors be racist? It’s the outdoors!” but the current reality is nothing about the outdoors is free or equal and never has been. In fact, our entire nation’s origin relating to national parks and forest conservation is embedded in the hatred and genocide of indigenous people and the exploitation of their lands. Globally, all of Western Europe and American imperialism is rooted in conquering BIPOC people and subsequently—their lands. Here at home, to name mountains after racist presidents, carve their faces into them, and put up statues immortalizing racist white colonizers are just simplified examples of what early Americans did in the 18th and 19th centuries and practices that are somehow commodified to this very day. Moving forward, recognizing and even celebrating the truth of our land’s ancestors is not enough, we must seek retribution for the erasure of their civilizations and monumentalize their histories and peoples.

To begin, we must first reflect on who and what “the outdoors” and national parks represent, and one way to do so is by first inquiring how they came to be what they are today. Early American conservationists of the late 19th century are hailed as “visionaries” for their spiritual philosophies on nature which are in part what led to the beginnings of the National Parks Service. They believed that nature offered more than just economic value to society and that the American people should have access to these lands recreationally. The frustrating irony is that Native Americans–whose ancestors already practiced spirituality in nature–were not even recognized as U.S. citizens during the late 19th century. Furthermore, the social and economic aftermath of slavery (i.e. Restruction Era and eventually Jim Crow Laws) prevented African Americans from enjoying the outdoors as well. Often, imagery of our national parks is used to symbolize America and freedom, yet nothing about it’s past was free or equal.

Heck, even the man who practically coined our national lands as “parks” turned out to be racist–a man whose writings on eugenics later became an inspiration to the Nazi party, I might add. Environmental blogger Richard Conniff in his article “How a Notorious Racist Inspired America’s National Parks” addresses our nation’s ugly truth with an earnest reminder, “Conservationists would understandably rather forget all this … It’s also worth remembering Grant’s history because minority groups remain vastly under-represented– just 22 percent of all visitors at last count–in our national parks, and even more so in the leadership of environmental agencies and nonprofits.” Essentially, exclusivity within outdoor recreation as we know it today can be further understood when we turn our attention to history. Geographical mapping, congressional lawmaking of American national parks, and the commercialization of these parks legally prohibited entire groups of people from enjoying the outdoors, and the effects of those policies still linger to this today.

With this in mind, justice continues with acknowledging how historic oppression constituted generational wealth throughout the last century, which influenced the role socioeconomics play today in the disproportionate accessibility to the outdoors between white people and BIPOC. According to the 2013 Outdoor Participation Report, 70% of outdoor enthusiasts were white. A separate study found that in 2018, among the thru hikers on the Appalachian Trail, 95% of them were white. The former report also found that 40% of participants came from households with an income of $75,000 or more. Are you noticing the pattern, yet? 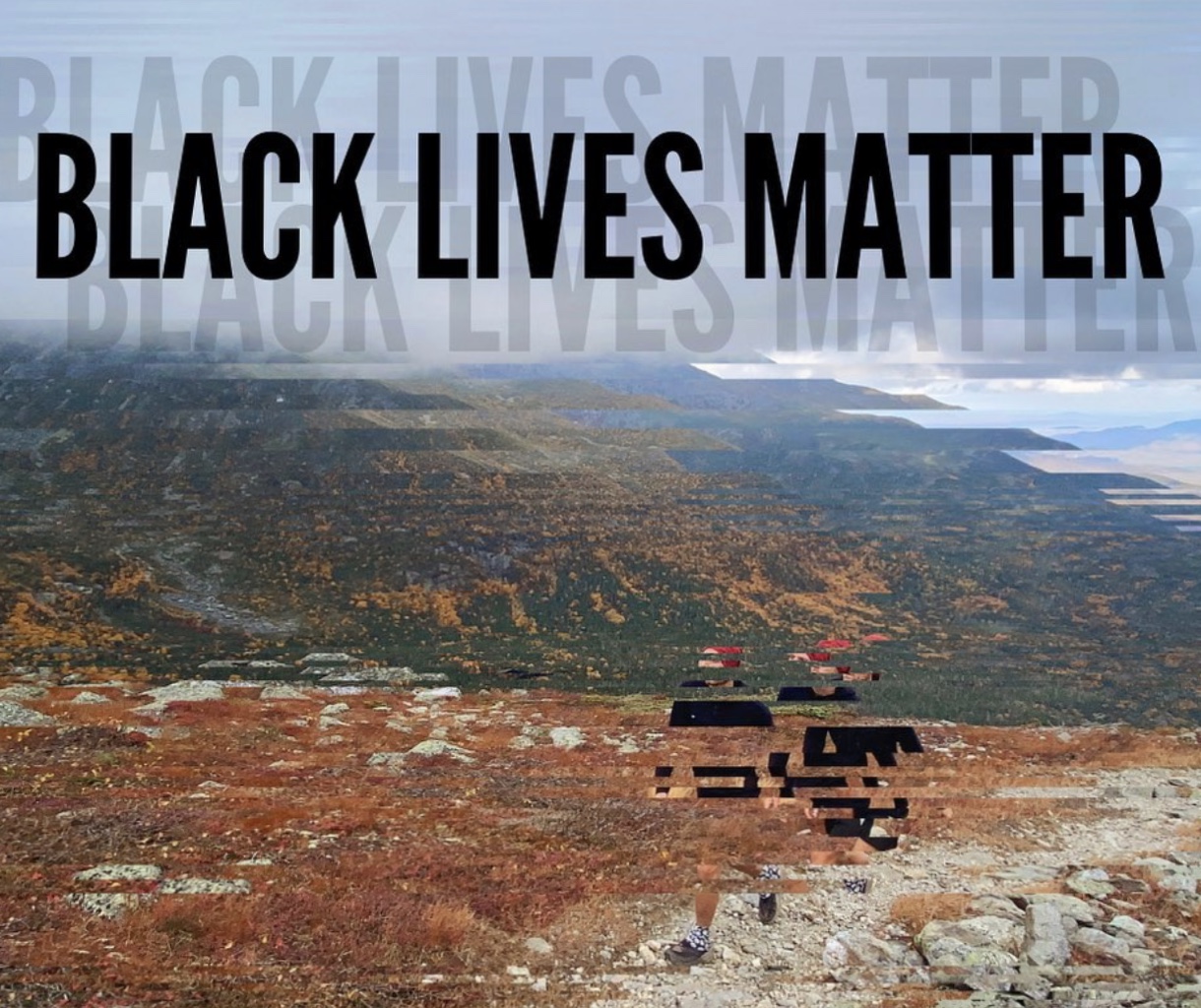 Which brings me to a point worth repeating over and over again: outdoor recreation is ridiculously expensive by design. Walk into your local REI and try not to faint at the overpriced tag of a hiking backpack or even a reusable water bottle for that matter. Aside from equipment and gear, you often need a car to get to these faraway places. Never mind the entire subculture of gentrifiers obsessed with tiny house and mobile home living—seemingly minimalist lifestyles that on the contrary are typically only possible for wealthy people with plenty of capital to sustain said lifestyles. If you’re instead thinking of roughing it out on foot for a couple thousand miles, just keep in mind the Pacific Crest Trail costs roughly anywhere between $5,000 to $10,000 to hike. Hiking, camping, and outdoor exploration is expensive and inaccessible without transportation and time—some things a lot of people, especially people affected by systemic oppression, cannot afford and thus do not have.

Furthermore, me even writing this essay is white privilege. Considering the strides society has made over the last five decades, where are BIPOC voices in this community? Where are their stories? Their experiences? Their photos? Their YouTube videos? Their Instagram handles? They exist, I know they do, but their inclusivity is lacking still, and I’m frustrated. When I click on an Instagram profile or photo that comes up on my explore page featuring a stunning landscape from one of our country’s national parks (typically somewhere in the Pacific Northwest, I might add) it is always taken by a white person. The majority of subjects in these photos are white people. White people posing, smiling, camping, stargazing, and to be quite frank, otherwise blending in with the pasty white clouds behind them if it were not for their neon colored Eddie Bauer jackets.

Outdoor recreation on Instagram is predominantly whitewashed, and it does not take a communications major to tell you that Instagram and media representation go hand-in-hand. Netflix’s most recent documentary The Social Dilemma (as sensationalist as it may seem at some points in the film) does a great job explaining how social media can be limiting to our perception of the world due to algorithm biases, however being aware of this problem is only half a step in the right direction. Mindfulness is not enough if you’re not doing your part to challenge these algorithms; part of deconstructing a confined view of the world–especially online–means using your searches and clicks as a tool for change. 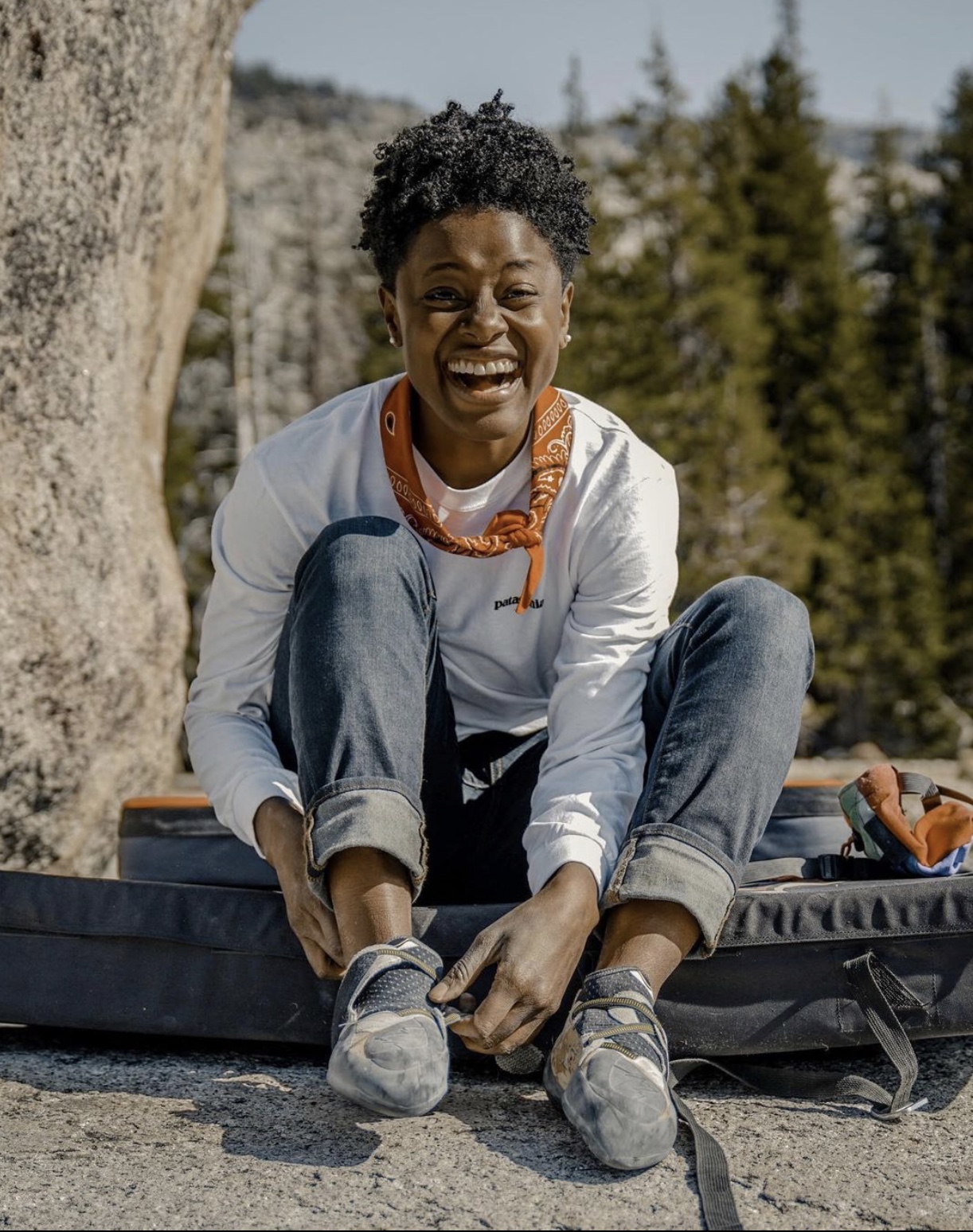 “L.” Renee of @urbnclimber does a lot more than scale mountains: she is also a photographer, journalist, blogger, and advocate for outdoor inclusivity. © @urbanclimbr

I have seen a lot of performative activism from dozens of larger accounts within their Instagram stories and captions (or worse plugging their online stores in the name of fundraising), and not enough of them pointing their followers to pages consisting of BIPOC hikers and outdoor enthusiasts, asking themselves why they might not exist in the first place, and/or reflecting on how they might inadvertently be part of the problem (I’m not excluded from these questions). @ChrisBukard, with your 3.6 million followers I commend you for your donations and hashtags in the wake of George Floyd’s murder; I have enormous respect for the work that you do, but why did your tenacity on the issues of black lives seemingly fizzle out around July? As for curation pages, take a gander at accounts like @vanlifecamper, @exploremoreportraits and @ofearthandmotion and try not to blind yourself from the saturation of glowing white faces.

On the other hand, hats off to White Mountains hiker @findingphilip, who is one of the only white hikers I have seen so far consistently and fervently checking his white privilege and using his platform to promote awareness pertaining to this problem. I would also like to mention kudos to the retailer Garage Grown Gear for their blog post on nine black hikers to follow on Instagram, including PCT hiker @akunahikes and visual storyteller @wildginaa. I also strongly encourage everyone who enjoys hiking to follow hashtags that might expand your horizons of outdoor recreation and include more voices (if you do not already). I myself will be doing the same after realizing I have not been. Some hashtags to check out include #blackhikers #blackgirlshike and #outdoorafro to name a few.

We, as hikers and outdoor enthusiasts, need to take a step back and address the racism that is causing people to feel not welcomed to the outdoors not just as a place but as a sociocultural industry, then actively work to be more inclusive every single day. That also includes holding major outdoor corporations and publications accountable when they fail to do the same. To conclude, the final point I want to make is to white hikers: it is okay to be frustrated and/or confused, it means you are paying attention and asking questions, but do not be complacent. Do not deny the racism that exists within the outdoor community merely because it might make you uncomfortable. Work to deconstruct your own colonized thinking and unconscious biases. I know how special it is to get out there, but ask yourself: What world are we eager to get out to, and how can we make it better?