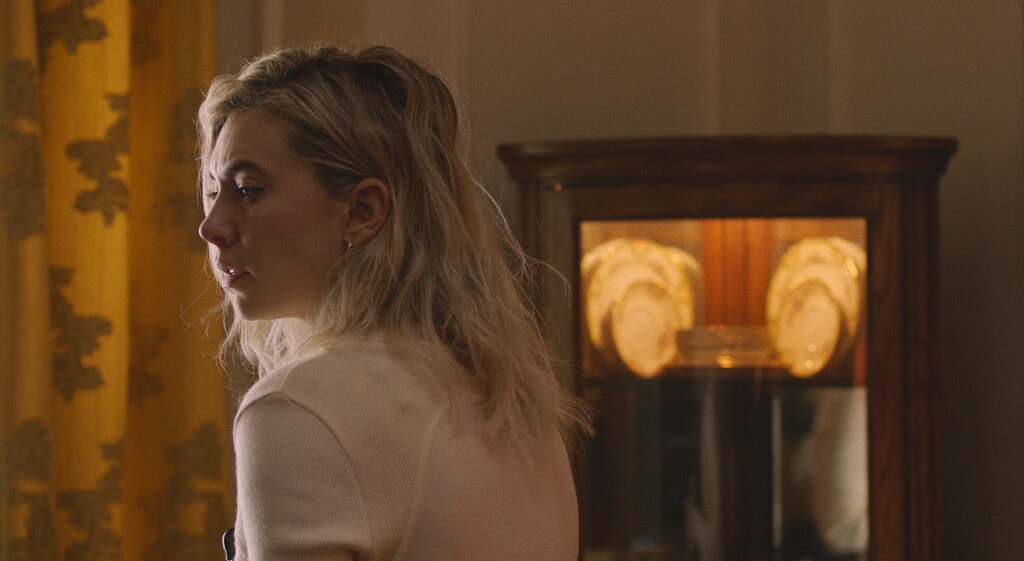 The origins of mistakes won’t be complicit to any visible telling in Kornél Mundruczó’s first English-language film, Pieces of a Woman. When the scene verges on a life-changing choice or lets the dust of fatal words settle, the atmosphere feels like this kind of movie is going right when everything is going wrong. Martha (Vanessa Kirby) is on her last pregnant days, indicated by an extraordinarily pointed stomach and the gathered materials needed for the embarkation of motherhood — new minivan purchased by her wealthy mother Elizabeth (Ellen Burstyn), work possessions brought back home once maternal leave commences, framed shots of her ultrasound to be hung in the nursery room. If Martha’s character were to be discussed, it’d be through the way her finger traces an object’s surface or the physical space she admits around her.

In the film’s engraved destination to tragedy, Mundruczó wistfully places a sparse but purposeful long take as an introductory thirty-minute scene of Martha’s labor, accompanied by her partner Sean (Shia LaBeouf) and midwife Eva (Molly Parker). As raw and devastating the decline of the delivery goes, the scene splendidly works in the tone and development of what’s to come, including Kirby’s talent in gracefully captaining the pivots and corners of Pieces‘ other continuous shots. In the aftermath of her child’s death and the legal battles with Eva’s accused malignancy, Martha’s mourning stretches over time, causing collateral damage to those around her. Unaware of the future’s arrival — or a future, even — Martha’s detachment to life is portrayed with the kind of precise destruction needed for cathartic healing, even if others don’t see it as par for the treatment.

Stellar performances from the past year have been close to the female experience, such as Carey Mulligan’s cold revenge desserts on male opportunists and Sidney Flanigan overcoming obstacles to get to an abortion clinic. The quietness that surrounds Martha allows for reflective moments, where I thought of the modern hindrance in women’s health and the disparity in complicated deaths for Black women in labor. Pieces of a Woman doesn’t seem to circulate a topical opinion like the others, but the insulated plot still holds as its own message. While the other characters’ collisions seem predictable, Kirby’s insulated performance can grab your focus for two hours so much that scenes with other characters, though not frequent, are clouded under her influence. In a review of Hillbilly Elegy, I mentioned that there will be movies that will be remembered by the star, not the plot. This movie will surely come handy in Kirby’s arsenal.

Two warnings: In light of the allegations surrounding Shia LaBeouf, I find it pertinent to mention that there are a few scenes with his character that were uncomfortable to watch. I would argue that a lot of his solo screen time, especially pertaining to a specific subplot, is irrelevant and could be skipped over. Also, despite being advertised as being a Boston movie, some of it was filmed in Montreal. I love Montreal, but this is Bostonian slivered-street infrastructure erasure!!