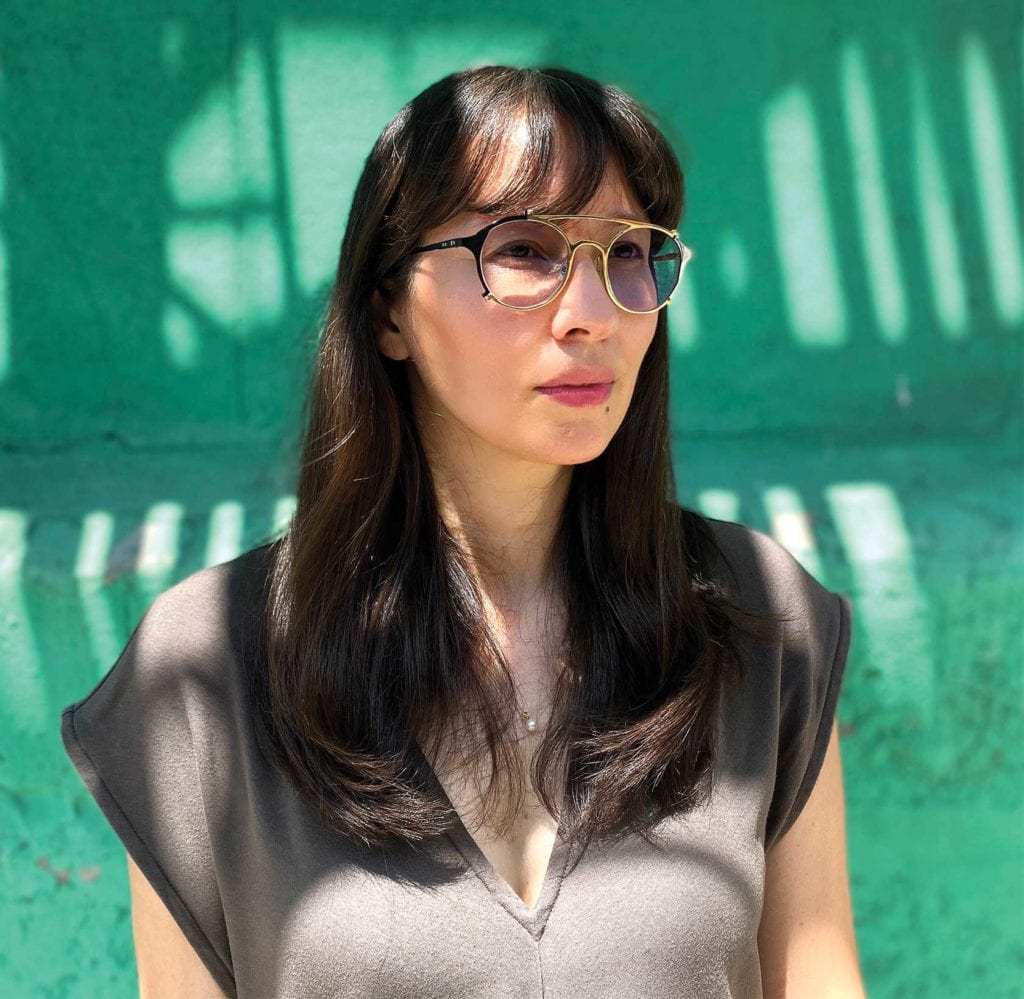 Down a Dark Stairwell is a street-level documentary that follows the 2014 death of Akai Gurley by the hands of Chinese-American police officer Peter Liang.  Ahead of ArtsEmerson’s premiere of the film on Friday, February 5, I talked to director Ursula Liang about the makings of the film and its role in the complex conversations between minorities and against the larger scale of oppressive whiteness in America.

The interview has been edited for clarity.

BOSTON HASSLE: How did you decide to make this story into a documentary?

URSULA LIANG: It was always going to be a documentary. I practiced in journalism for a long time, working in prints and mostly magazines. I’m really attracted to the things that documentaries can do, especially for the Asian American community. I thought, at various points, that I could do a podcast because it’s so much cheaper and easier to produce, but our community is still seen as a perpetual foreigner. It’s important for our faces to be on screen and for people to see us in different nuanced ways beyond the foreign face in front of them.

This story definitely piqued my interest right away. I had been following the growth of the Black Lives Matter movement. I live in New York, and the Eric Garner case had happened about four months before this incident happened. When I saw the news article describing this and with the officer being Asian American, I knew right away that that added new elements to the dialogue.

BH: It’s weird to say, but when this happened in 2014, Eric Garner and Michael Brown were the names on the news and BLM was a phrase that the majority of Americans didn’t understand. Now, we’re approaching the one-year death anniversaries of George Floyd and Breonna Taylor, and BLM has become more popularly accepted. Even more, I think there has been a more introspective look in what we can do as minorities against anti-Blackness. If this had happened now, do you think the response from the Asian American community would have been different in any way?

UL: That’s an interesting question. I often ask that question, but no one’s asked me that yet. The reason why I like making long-form is that people forget the context of when it happened, and I like to remind people that this [case] happened around the time of the Garner case. In the context of today, I actually think it might be the same response from the Asian American community. The largest response from the Peter Liang case came from those who were really uninitiated in this space and were coming into their own beings as activists who were speaking on behalf of their community. One of the things that the film explores a bit is cultural nationalism — I don’t know if that’s the right term, but it’s the idea of thinking about your community first, what that means, and whether or not that’s how we should be thinking in this world. Some folks who felt that this Asian American police officer was being treated unfairly and were protesting on behalf of Peter Liang in this case would, I believe, have a different positioning on the George Floyd case, where they’d be squarely on the side of George Floyd supporters. I think those who were supporting the police officer in this case saw this as a specific outlier because there was no video and they believed it to be an accident.

You mentioned about how the term “Black Lives Matter” is coming to itself. To put it in Boston context, for communities like Brookline, they have a better understanding of that term now. But I still think that sometimes the language of the movement and protests is still not fully understand, especially for communities with English as a second language. Obama got into a lot of trouble for using “Defund the police,” where people were saying that that wasn’t the kind of language that we should be using the movement. When people are dealing with movement language in a literal way, there’s a disconnect with what those ideas are, which are more complex than the very literal meanings.

But I don’t know! When this happened, I was very surprised by the reaction. I was not surprised when people were supporting the police officer, but I was surprised at the scale of the support for the police officer. There’s always people on multiple sides of a topic, but the scale of the support from the Asian American community, particularly the Chinese-American community, for Peter Liang was like unlike anything I’ve ever seen before.

BH: The part in the documentary where you see so many protests in different cities, let alone even one city, speaks a lot from the Asian American community.

UL: I don’t know if it reads quickly enough, but Boston is in there. You can see a clip of the State House.

BH: It’s so crazy because I don’t remember the protests happening. I do remember the Michael Brown protest but I can’t recall the [Peter Liang] one.

UL: It’s funny when you’re talking about these cases. Most people refer to the George Floyd case or the Michael Brown case, usually referring to the names of the victims. But often times here, they’re not referring to Akai, they’re referring to Peter. In a lot of the cases, the police officers’ names are forgotten. There’s a movement to elevate the names of the Black men who have been killed in remembrance of them. But that could also take away the accountability of the police officer, where they can get away from the public eye and still get a job at CVS. In this case, Peter Liang’s name is arguably more remembered than Akai’s. Or maybe it’s just us as Asian Americans.

BH: One thing I enjoyed about the documentary is the variety of voices that were on screen. Some of the scenes had this feeling that someone literally walked up to them and started asking questions.

BH: How were you able to approach this? Did you have to be delicate in showing that this documentary didn’t have a mission or goal?

UL: Nowadays people have the perception of documentaries as more as advocacy pieces. They’re used to people having this specific objective, but that’s not how I try to make films. Before I talk to people, I try to make it very clear that I come from a journalistic background and that I’m trying to present multiple sides of the story. I try to be conscious about how I approach people. Within the Asian American community, I learned how to make a film in Chinatown [in the Boston-based documentary 9-Man] and how to be introduced. A lot of my contacts with the Asian American community came from introductions, some from the streets as well.

With Akai and the family, I was very conscious that my last name could be a trigger point since it’s the same as the officer, even though I’m not related to him. Instead of cold-calling and sending emails in their inbox, I committed to in-person talks and events. When I talked to Hertencia, Akai’s aunt, and explained where I was coming from, she said that, yes, it would have been triggering if she had just seen my name. I also made a very conscious effort to have a BiPOC crew*. That’s my personal mission as a filmmaker, but also an important take to the story. It makes a difference when you’re walking up to people in the street, and you have a crew that’s not a team full of six-foot-tall white guys.

It was also important to have Black male voices in the story. At the time when we were filming, there weren’t a lot of organizers that were Black men showing up for the protests. They had been there in the beginning, but we came a little bit late. In one of the conversations that closes the film, we were just shooting a B-roll and there were these two young men in the neighborhood watching us, eating pizza on top of a car. They offered me a piece of pizza and asked me what we were doing. They knew about the case and we asked if they wanted to talk about it, which they did.

From my perspective and the perspective of our Black collaborators, one of the other goals in this film was to make sure that these communities weren’t seen as monolithic. Both Asian American and Black communities have challenges in the media as being seen as very specific types, and that’s not the reality at all. There’s a lot of nuanced opinions and conversations, which you wouldn’t see in news coverage. It was a well-covered story, but you would get three-minute soundbites of anger on the streets while there were so much intelligent and complicated conversations in different spaces.

BH: I thought it was interesting when the film showed Asian Americans protesting to have Liang convicted, and that the juxtaposition of the protests and who was in them showed those nuances. As the documentary unfolds, it becomes complex. You have a story about a man who was killed. It could have closed in ten minutes — you have the charges, you could show the results, and that would be it. But as it unravels, the complications between the Black and Asian American communities show that by the end of the trial, there isn’t a satisfactory answer for either side. What message do you hope the audience would take away from it?

UL: We could have made a film that was about the case. There were a lot of twists and turns, but we very consciously wanted to make the film as a starting point for some of these larger conversations. For sure, a lot of Asian Americans weren’t on one side of this issue. A lot of stories about race in America are about people of color and whiteness. To have this opportunity to step outside of this racial binary was really important. Whether people like the film or don’t like the film, I see it as a starting point between our communities. We’re reaching a point in this country’s demographics where people of color are starting to be dominant, but we’re still struggling with the same systems of oppression that keeps us, and I hate to use this term, “in our place.” We’re gaining power in various ways, but it’s being dissipated very readily by these systems. Whether there’s a satisfactory answer or or any sort of justice that satisfies anyone, I think it’s important that we talk about how we fight for justice, how we fight together, and how we choose to align ourselves with the ideals and progress that could really benefit all of our communities. I’m hoping that there will be a lot of conversations about coalition building and solidarity that come out of this film, as well as the acknowledgement that these systems don’t work for any of us.

*Interview note: The song that plays at the ending credits, “Elephant in the Room,” is co-written by Pretty Boi G (one of Akai’s friends) and CHOPS, who was part of the one of the first Asian American hip-hop groups signed to a major record label.

Down a Dark Stairwell will be available to screen at ArtsEmerson on Friday, February 5 until Sunday, 2/7. In addition, it will be featured on PBS’s Independent Lens on April 12 @10PM!