Ye be warned, all who enter—if you’re looking for a remake of Wrong Turn (2003), with your beloved Saw Tooth, Three Finger, and One Eye, you won’t find it here.

Mike P. Nelson’s reboot of the 2003 flick opens promisingly with gritty cinematography and an eerie backwoods town, where Scott Shaw (Matthew Modine), a middle-aged father, is searching for his daughter Jen (Charlotte Vega) and her friends. The group has been hiking through Appalachia but hasn’t been heard from in six weeks. Afraid something has happened to his child, Scott asks the innkeeper, bar patrons and a few locals from around town if they’ve seen her, but none give him help—only the cryptic, “She better have kept to the marked trail.”

The crew is close-knit, diverse, loud-mouthed, and progressive—something that sticks out like a sore thumb in the small mountain communities of West Virginia. They stop for the night to stay at an inn. They cause trouble at a bar, where Adam insults and openly mocks an elderly local that has offered them guidance on the trails. The local insinuates that the group is entitled and has never worked a day in their lives and should respect others that are not like themselves. In a cringey monologue, Jen jumps down the local’s throat, listing what everyone around the table does for a living. She tells the local that he shouldn’t assume things based upon their appearances—despite that Adam just did. When they leave the bar, Adam starts up again, throwing empty beer bottles at a figure in the distance.

Jen goes for a jog in town before the group heads up to the trails. There, she meets a young woman named Edith (Daisy Head) and a little girl, Ruthie (Rhyan Elizabeth Hanavan), who sell bracelets by the roadside. The girls are standoffish and act oddly, but Jen buys a bracelet as a keepsake.

When Jen and her friends head up into the mountains to begin their hike, Darius tells them about an old Civil War fort that they should check out. It’s not on the marked trail, and even though everyone told them not to, the group heads off the trail and into the thick, unforgiving woods. 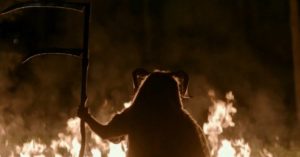 They become lost and are soon stalked by unknown entities. Luis is horribly crushed to death by a rogue tree trunk, and Milla falls into a ditch and is impaled on a branch trap. Adam is kidnapped by two men in deer skull masks and ghillie suits. He escapes and kills one of them in a fit of rage.

The group is kidnapped by Edith, who is revealed to be the daughter of Venable (Bill Sage), the head of The Foundation, the group who has been killing the young hikers. The Foundation—not deformed or inbred in any way—are a community that has branched off from modern society to create a community where everyone is equal, and nobody ever gets sick. After Venable delivers a lengthy, dramatic monologue about how they should not judge The Foundation and think of them as barbarians, he slaughters Adam by bashing his skull in with a club. Jen offers herself and Darius up to join the community as an eligible, fruitful wife and as a skillful hunter, respectively. Venable takes Jen as his wife.

After an undetermined amount of time, Scott rescues his daughter (on his own through a massive, booby-trapped forest… how?). Darius, attracted to The Foundation’s beliefs that everyone should be treated equal, chooses to stay with the community. 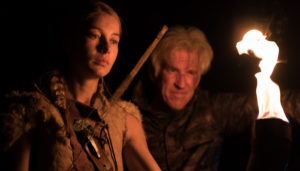 Sometime later, once Jen is back in suburbia with her family, she’s seemingly not affected at all by what happened, though it’s revealed that she’s pregnant. She brutally murders Venable and all of his one-dimensional henchmen when they come to bring her back to The Foundation (which seems out of character for their community). In a weird ending sequence—with an eerie, slow cover of “This Land is Your Land” laying over Jen stabbing Venable in the middle of a suburban street—the film ends.

As the credits began to roll, all I could think was, “what the hell was that?”

The film has its minor strong spots—Matthew Modine is always great, though his talent is wasted here with bad writing. The traps are creative and horrific, but we don’t see enough of them.

While you want to like Jen and her friends because of their positive and progressive ideals, it’s difficult when they’re so mouthy and rude to the locals. Despite knowing what town they’re in, and who they’re around, they don’t respect it, arriving everywhere they go like they own the place. Though they receive countless warnings and offers for help from these locals, they ignore them, and do what they want to do.

This entitlement soured the empathy I wanted to have for them, as did the writing of their characters. Jen is a Mary Sue—attractive, intelligent, kind, and without any flaws. How did she go from a quivering, college-aged hiker to terrifying murderer that skillfully takes down an entire RV filled with large, armed men?

She and her friends don’t have much depth, coming off as caricatures rather than actual people. Adam is so rude and intolerable that I was waiting for him to die. He’s every annoying frat boy in every horror film you’ve seen. Milla has the potential to be likable, but doesn’t survive long enough for us to find out. Gary and Luis are seemingly the only intelligent ones in the group—they both beg Darius to not divert from the trail but are ignored.

Since the film is called Wrong Turn, you’re led to believe that the evil, inbred antagonists of the original film will be the ones responsible for the mayhem and violence that plague Jen and her friends.

The Foundation are just people that preach about how their way of live is purer and more superior than those who live in modern society. Yada, yada, yada—we’ve heard this before. It’s a weird, cheap mix of impressive horrors like The Ritual (2017) and Midsommar (2019), and here, it just doesn’t land. Wrong Turn is a whole other movie, and shouldn’t share a title with the original classic. 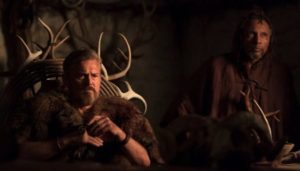 The same screenwriter, Alan B. McElroy, penned both the original and this reboot—but you wouldn’t know it. Because of this, Wrong Turn feels like a cash grab rather than a horror movie made out of the bloody passion that was evident in the first film.

This film, realistically, should have ended with Scott and Jen driving away from the woods. The following sequence with Venable is unfitting, odd, and rushed—it’s squashed at the end of the film like they’re baiting you for a sequel. Instead, Jen just goes on an out-of-character, comedic murder spree, and then it’s curtains.

Wrong Turn begins with promising, gritty cinematography and an eerie backdrop, but due to its lack of organization, unoriginal protagonists, poor writing and misleading marketing, its execution falls flat.

Available via on demand, digital, blu-ray, and DVD Tuesday, 2/23