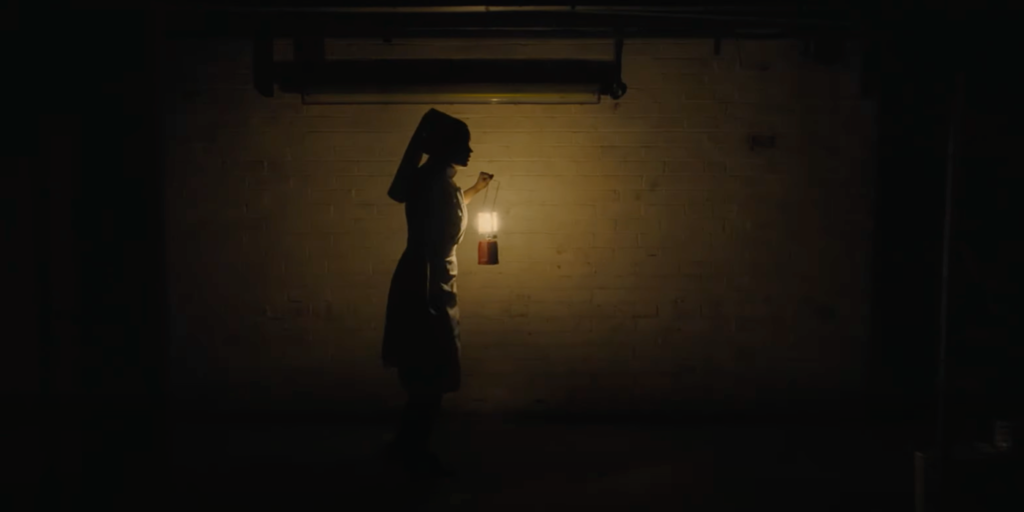 From its start, The Power is a movie built of shadows and silence. Taking place in the 1970s during the miners’ strike in London, controlled blackouts plunge the nation into darkness as soon as the sun sets. Val, a young nurse on her first day of duty, is assigned the night shift in her new hospital, a grungy and near-crumbling structure of maze-like hallways and pitch-black corridors. As night carries on, Val is confronted by a sinister presence bent on dealing out terrible violence, using her as its vessel.

It’s a rather tight, old-fashioned ghost story, centered around Val and the secrets this hospital holds. Just as much a character in its own right, the darkness, which hides so much horror for Val, also begins to reveal hidden histories and memories for both the young nurse and the building alike. Paired with this atmosphere of darkness is also a system of control designed to keep men as the power brokers, while women diligently and invisibly work and children are disregarded. The all-encompassing horror isn’t solely a demonic presence, it’s the way that women and children are tossed aside or rendered “hysterical.”

At its core, this is a movie about trauma, like many a horror movie these days. And I do realize that “trauma” has become something of a corporate, marketing buzzword in filmmaking as of late, of course, and how often “trauma” can be used as another two-dimensional boogeyman, like mental illness and queerness before it, gussied up with the tropes and filmmaking we now associate with “prestige horror.” I do think, refreshingly, The Power avoids the standard pitfalls and is able to successfully traverse the messier manifestations of traumatized people and the ways a traumatic past can infect the present, infect the very spaces, systems, and communities that we inhabit.

Like Brian De Palma’s Carrie or Jennifer Kent’s The Babadook before it—or even Kent’s even more expertly grueling The Nightingale—Corinna Faith’s The Power doesn’t shy from what trauma and trauma responses can bring out in a person; that is, her protagonists are never seen as monsters in their own story, no matter what they may do. Nor does the movie capitulate on what justice might look like for such a person, demonic or not.

A lot of the movie’s strength comes from Faith’s direction and Laura Bellingham’s cinematography. Together, they create an all-encompassing atmosphere that makes for a compelling watch. Faith’s screenplay is perhaps where the movie falters the most. It is a bit predictable and contains some repetitive jump scares. Without utilizing subtext more often, scenes are rendered two-dimensional where they should be rewarding and deeply felt. However, The Power more than makes up for any predictability or derivativeness with exquisite filmmaking and strong performances all around. Likewise, Max de Wardener’s music elevates every moment of this movie perfectly, in a way where dialogue or particular expositional shots could have been left to the wayside.

All in all, this is an excellent debut from Corinna Faith. She crafts a world not unlike our own—one of chaos within the very systems meant to heal or protect us. In this chaos, in this darkness, Faith finds something terrifying, yes, but she also creates something uniquely transformative, empowering, and ultimately, unifying.

Like a character in The Power says about Stephen King’s Carrie, “This one’s about a girl who’s had enough, and brings the whole place down.”

Available on Shudder on Thursday, April 8

Streaming is no substitute for taking in a screening at a locally owned cinema, and right now Boston’s most beloved theaters need your help to survive. If you have the means, the Hassle strongly recommends making a donation, purchasing a gift card, or becoming a member at the Brattle Theatre, Coolidge Corner Theatre, and/or the Somerville Theatre. Keep film alive, y’all.