Boston multimedia journalist and artist Arielle Gray is known for her passion for examining and identifying the intersectional identities of marginalized communities. While she is currently a fellow at the Dudley Street Initiative located in Roxbury area, she has also taken her passion for giving a voice to those who need it the most to The Boston Center for the Arts (BCA) with her project, The Roots That Bind. 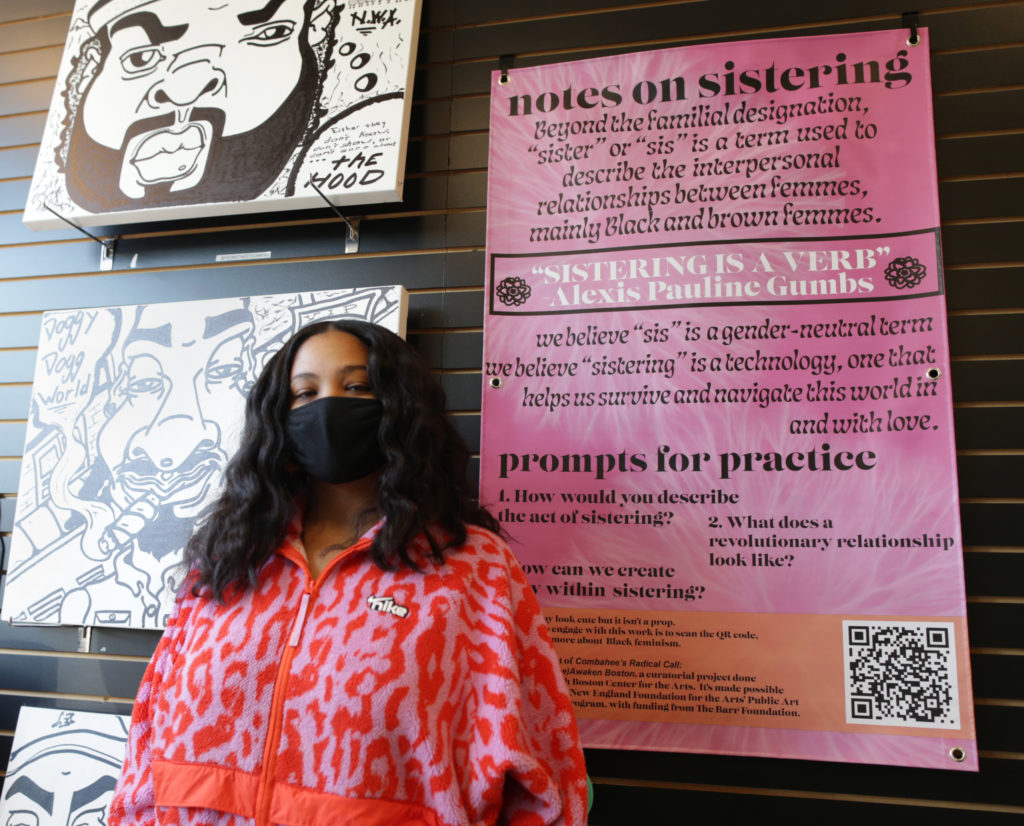 Arielle Gray with a poster from her project, The Roots That Bind (Photo by Jonathan Wiggs for The Boston Globe)

The Roots That Bind — Gray’s collection of hand-made posters and banners that focus on exploring the intersection of Black feminism and visual art — is a part of the art series Combahee’s Radical Call: Black Feminisms (re)Awaken Boston, hosted by BCA (through June 2021) and curated by Gray, Cierra Peters, and Jen Mergel. Combahee’s Radical Call: Black Feminisms (re)Awaken Boston was created in response to dialogue with Demita Frazier, co-founder of Boston’s Combahee River Collective, and inspired by the Black Feminism work done in Boston. The Roots That Bind was added to the series as a way to amplify the voices of BIPOC femmes and non-men of color from around the Boston area.

As a call-and-response-centered project, viewers are asked to engage with the Black feminist texts displayed on the banners, including passages from Audre Lorde’s Sister Outsider,  June Jordan’s Many Rivers to Cross, and others. By utilizing QR codes, passersby can then access the full texts to engage with them and, ultimately, create a visual that ultimately answers the question, “what does Black feminism mean to you?”

In an interview with BAC, Gray discussed her inspiration for the project and what Black feminism means to her. “Black feminism demands that we see our globe as our ecosystem, not just our cities, counties or countries,” said Gray. “This project brings what we feel are essential Black feminist materials directly to our communities to continue the never-ending work of liberating information and knowledge from the chains of white supremacy,” she added.

In relation to Gray’s discussion on the importance of Black feminism and motivation to uplift current artists, BIPOC women, femmes, and non-men of color are encouraged to and submit a response to the project that explains what Black feminism means to them (by the medium of their choice) by April 30th. Chosen artists will receive a $250 stipend and will have their work reproduced across the city. Submissions by BIPOC, femmes, and non-men of color will be considered a priority when choosing those who will be selected as part of the project, but anyone is welcome to submit.

Giving a space for contemporary artists while paying homage to the Black feminists who have paved the way for current generations is a key part of Combahee’s Radical Call: Black Feminisms (re)Awaken Boston. As creativity and social justice will forever be intertwined, Gray hopes to continue that tradition for up-and-coming artists, as shown with The Roots That Bind.

You can view The Roots That Bind on display through June 30 on the walls outside the Boston Center for the Arts (539 Tremont St Boston, MA 02116).

The post Arielle Gray Highlights Black Feminism with her Project, The Roots That Bind appeared first on BOSTON HASSLE.