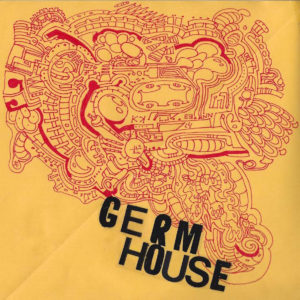 The other phantoms are wandering around righ-
t now. We all congregate this time around th-
e imploded coal mine. Our routines are prett-
y important, and the whiskey is alright. You
can’t feel the burning warm feeling spreadin-
g through the body, though, but it still mes-
ses you up.

Complaints arise about it being too dark, and
the wind cuts through the valley so we’re al-
l incredibly cold. We agree this is a shitty
situation but, I guess, we realize there is
not much we can do about it. Not now, anyway.
The foreman is somewhere. We know he is arou-
nd, somewhere, but we never see him.

The film rolls by and the same scenario fla-
shes around. At this point it has no effect.
A cart comes barreling down the makeshift t-
rack and when it comes to the corner over b-
y the swamp-marsh it will tip and Frank wil-
l get smothered. Everyone will notice and w-
ander in that direction. Tom says, “He’s de-
ad”, and then the sky lights up in the most
terrific shade of neon green.

We cover our eyes. Then the sound starts. I-
t is a voice, but not in the normal sense. A
while back it would have scared the shit out
of every one of us, but, at this point, all
it evokes is a dreadful shiver down the spi-
ne. It’s eerie as all hell, and there is no
shaking that.

Anyway, the light is blinding and we hear t-
his disembodied voice. In the distance we c-
an hear Frank screaming. It’s the sound of a
nightmare; the otherworldly, encroaching do-
om, howl resonating through the poisoned, s-
oot-laden trees. The voice says we all rea-
lly fucked up this time. Doom indeed. There
is no denying spooky things are afoot tonig-
ht.

The trees start cracking, bending, in demen-
ted arcs toward the entrance of the shaft. A
tremor is shaking the ground and weird gutt-
ural noises are coming from inside. A demon
farting or something. But, low, low, low. D-
rawn out. A horrible thing to have to listen
to. Then comes the smell of rotting eggs. E-
veryone catches it at the same time. The vo-
ice goes on about how we suck. We’re incomp-
etent assholes. The chaos mounts and people
start trying to run away. It seems like the
reasonable thing to do.

Bobby sprints off into the dark woods and e-
xplodes. Insanity. Al screams. Brains are o-
n the brim of his hat. His face bloodied. B-
urned. He wasn’t far behind his friend. His
friend is now sanguine splotches on the fro-
zen ground, and tendrils of ash floating in
the air. The smell of death mingles with ro-
tten egg. Like I said, nightmare-terror tak-
es hold. Suddenly. For no clear reason. The
voice drones on about it. The voice sounds
crazy.

I recall thinking about these things as , d-
eja vu, when the groaning from the mine sha-
ft gets louder and it mixes with Frank’s sc-
reaming and Al’s babbling. I understand I a-
m about to die. The thing that gets me ever-
y time is I don’t really know what happens.
There is an explosion. The mine, I guess, c-
ollapses. I can’t see anything at this poin-
t, all is void, but I hear rocks tumbling a-
round and the sound of soil as it falls to
the ground. I feel pain – an awful new pain
– and then I’m elsewhere.

All I can focus on are the screams, and th-
is slowly fades away, too, until all I am
sensing is this pain. My body is fucked. I
have no idea where I am. Everything is dar-
k. Silent. Then I see the orb. It starts o-
ff as an iridescent blue/green squiggle. As
tiny a point as can be and, very slowly, it
approaches. My eyes don’t work, obviously,
but somehow I sense depth and distance. I
realize the pain is subsiding. The squigg-
ly point enlarges and reveals a strange u-
ndulating egg-like object. It gets closer.

The closer it gets the less pain I feel, b-
ut I start hearing that voice again. A sen-
se of panic takes hold. Pain is gone. The
green grows brighter and brighter until i-
t is an all consuming white light. I’m co-
ld. Unbelievably cold. I hear voices repea-
ting the same thing. “Why is it so dark?”
“It’s fucking freezing.” “Where’s the fo-
reman?” I open my eyes. The mine. Someth-
ing to my left startles me. It’s a cart
being pushed down a makeshift track. Gai-
ning speed, heading toward the swamp-mar-
sh. I have no idea what I’m doing here, b-
ut I’m sipping from a jug of whiskey. A v-
oice is yelling.

World’s A Chore by Germ House