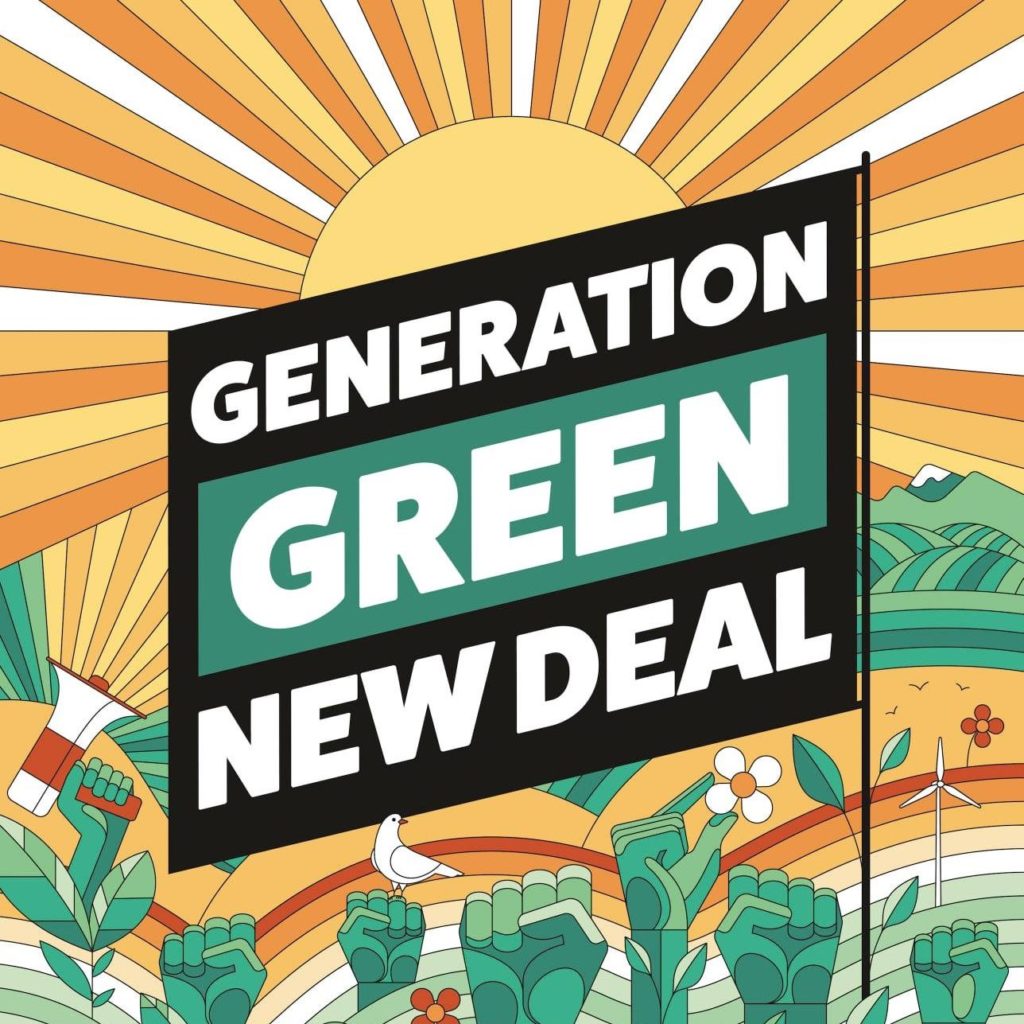 The adults of my youth were many things, but above all, they were optimistic. “The future is yours,” they proclaimed, “and it’s bright!” Maybe it was bright because the hole in the ozone layer was growing. I remember learning about global warming in 7th grade; climate change was a footnote in high school science classes. “Your generation,” adults promised, “has what it takes to solve the great problems of our time.”

In Generation Green New Deal, Sam Eilertsen proves the adults of my youth correct. He combats the typical defeatist, doomsday sentiments that accompany stories about climate change by capturing the unbridled hope of young people finding collective power, refusing complicity, and believing in their ability to save our planet. He follows the Sunrise Movement, a youth-led activist organization advocating for the Green New Deal, which calls for America to transition to 100% renewable energy within this decade. The activists are not so much idealistic as acutely aware of the urgency of the issue: you can hear the ticking clock in their impassioned speeches—the end of this decade is all the time we have to reverse the environmental devastation humans have inflicted on Earth.

But these activists refuse to settle for a grim future: if we’re going to make it through this existential crisis, we should want to live in the society that we have on the other end. The Green New Deal proposes guaranteed jobs at a living wage for every American, a transition that bolsters communities and respects the dignity of workers moving out of fossil fuel industries, free college education—basically, they’re asking for a future we can all live with and in. It’s a comprehensive attack on inequity, one that could only be brought about by people who were told, and who believe, they have what it takes to solve the great problems of our time.

We usually talk about youth-led movements with awe, like we’re amazed by what young people can do. Eilertsen doesn’t concede to this trope. He does the opposite, shining a light on the dismal reality of what brought these young people together: they are demanding power because our lives are at risk and no one with authority is doing anything about it (even the Dems). Eilertsen captures their fury and disappointment in a poignant speech shouted by a young man in the halls of Congress:

“So many times in the past few years, I have had to grow up. Like the first, second, and third time I read about kids being shot in schools…And every time I read or see about the aftermath of climate-fueled disasters…I read that, and my resolve is so shaken, and I have to grow up. Speaker Pelosi, Democratic leadership: we are asking you to grow up.”

The same adults that promised us the future are the ones refusing it, but these activists will not hear “no,” even if it’s only because “no” is not an option. In this charged documentary, Eilertsen illuminates the hope and rage that define these activists demanding a livable future, and bears witness to the beauty of a collective who refuse to be daunted.

Much like the future before us, this film is a work in progress. (Who knows? If you get involved, maybe you’ll have a say in the ending.) You can stream Generation Green New Deal through ArtsEmerson from April 14 to 15, and you can also join director Sam Eilertsen and activists for a conversation this Thursday at 8PM.