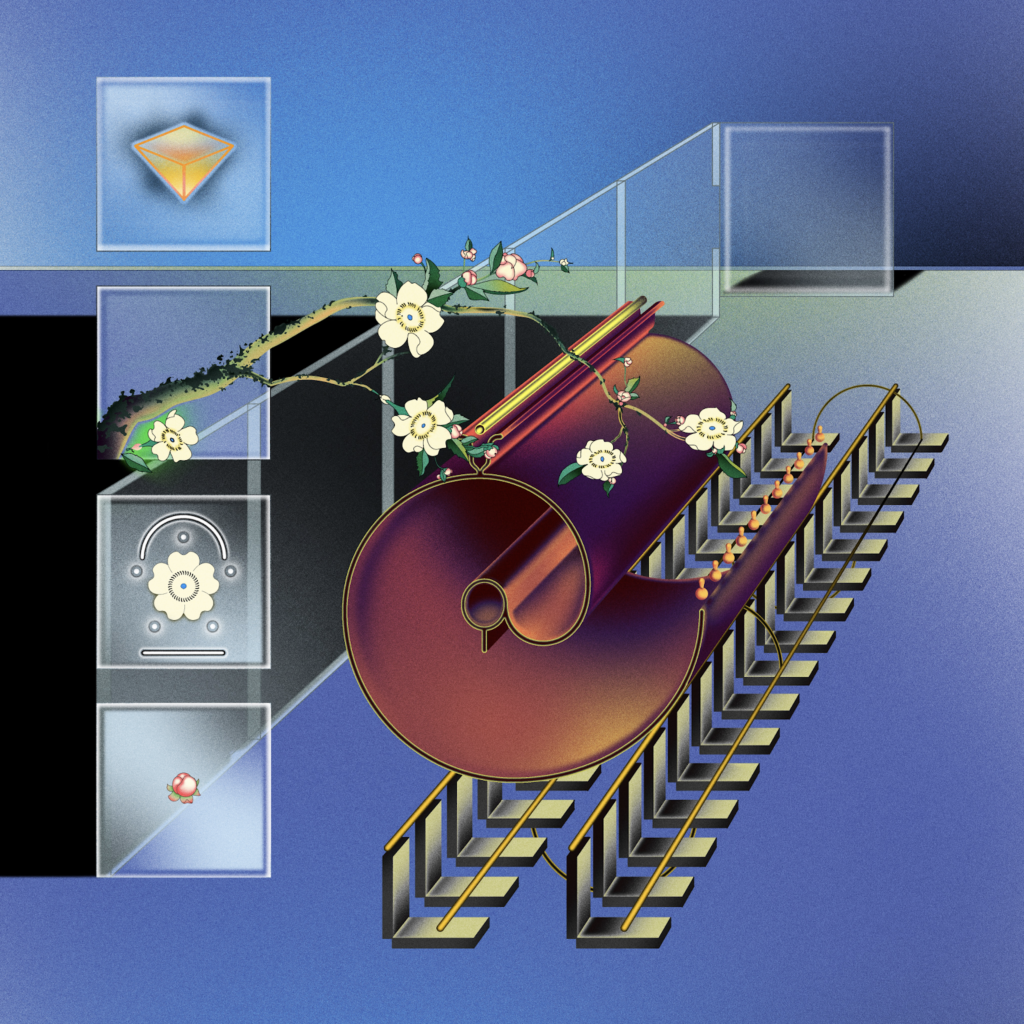 On the whole it’s been a bad year for musicians. Tours canceled, album releases DOA, rehearsals on indefinite hold. Once things reopen, whenever that will be, every show will be a reunion show, with the question being which bands will still be around to re-form.

Out of this void, comes @, the outgrowth of friends making the most of this past year’s indefinite downtime, sharing demos over iMessage. It’s far from the first album to be recorded remotely but the nature of its collaboration is defined by the long distance bonding precipitated by social distancing. It’s easy to imagine DAW projects crowded by texts and Dropbox windows, but it’s the conspicuous variety of room spaces and natural reverbs that bear the signature of accelerated displacement.

Spoiler alert: @ are a duo, though I might have guessed somewhere in the “-tet” range. It’s not the flutes, pianos, and electronic adornments so much as how Stone Filipczak’s and Victoria Rose’s cube when they sing together. On opener “Parapet” it’s hard to tell who’s who, and harder to believe the chorale is layered out of just two voices.

Two more songs in, it’s clear we’re dealing with chemistry on a legendary scale. “Star Game” and “Letters” are unmistakably Rose tunes but play as if every empty space were made for Filipczak, who brings an instrumental arsenal to rival Brian Jones. Filipczak is on the vanguard of a new kind of counterpoint, imbibing all of its invention yet blissfully inattentive to its rules. Played against Rose’s melodies, which flow from the most cosmic of pop wavelengths, you want to hyphenate their last names on a plaque. And when Filipczak takes his first lead on “Friendship is Frequency,” it’s something of an unveiling, the utility man suddenly taking the stage. It’s hard to imagine a more unlikely contrast to Rose’s 70’s folk-inflected croon than Filipzcak’s mall-punk sneer but by the end of the album it feels perfectly natural.

It seems fair to say that Chris Weissman, Fleetwood Mac (especially Tusk), and Campfire Songs are the cornerstones undergirding @’s pop instincts. Much like those artists, @ excels at working within the limitations of home recording setups while rendering the particulars of domestic space into pop music (not to mention building the bulk of their songs on surprisingly fresh takes on acoustic guitar). I also hear snatches of the Vashti Bunyan, Nick Drake, CSNY, the Zombies, Moondog, the folky Led Zeppelin. But Mind Palace bears no traces of nostalgia—no longing for some “classic” era—anymore than the artists aforementioned.

Mind Palace’s odes to friends and lovers have a way of encapsulating all of the possibility and confusion of the most incidental day to day encounter. My favorite is “Where’d You Put Me?” whose one line “You look at my face / and I forget my place / inside my own soul”—which could refer to a shared pic on Instagram or Tinder as easily as any old IRL interaction—is a lyric that could have come out of any point in the past 50 years. It’s a reminder that “timelessness” is contingent. With Mind Palace Music, @ have tapped into a new sense of timelessness that can speak to both the precarity and the potential of love and friendship within the contemporary moment.