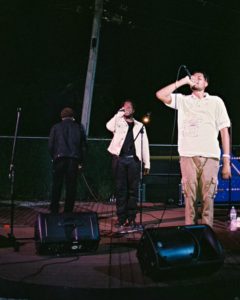 It’s an uncharacteristically gorgeous Friday night during summer 2021, a diamond in the persistent rough of thunderstorms and hurricanes. The eye, if you will. We’re about two days away from the possibility of a detrimental tropical storm, the first of two that eventually would hit the northeast in a matter of two weeks. On this particular night though, Aug. 20 to be exact, the sultry and steamy air of a late summer New England day dictates the present.

I’m visiting my two good (and vaccinated) friends who live in the Boston area, and we have a plan unique for this specific moment in time. We’re going to the AERONAUT Allston, Boston’s first ever pop-up beer garden, to watch performances from four of the state’s rising musical stars. Randolph’s Lance Jackson, Brockton’s Benjy Ali, Brockton’s STEFAN THEV and Boston’s own JORD4NEVERDIED are set to hit a medium-sized circular stage tucked in the Sideyard at Zone 3 between 6 p.m. and 10 p.m. The performances are a part of the AERONAUT’s novel musical series, and this one is titled, “AERONAUT Allston Presents: HIP HOP VOLUME 1.” Volume two would be a couple weeks after.

The series title is cool, though somewhat misleading, as the majority of the artists performing tonight also specialize in making sensual R&B, existential alternative and mystical crossovers. I’m personally excited, as this will be my first show since 2019, when the Earth was only subtly dying. For my two friends, this will be their formal introduction to a portion of the budding eastern Mass. music scene, and in preparation, I play them a few tracks from each artist in my lovely 2004 Ford Taurus as we head to the concert. After hearing some songs, they are both excited too now, but we’re all wary of the delta variant, so we bring masks just in case.

We arrive around 6:30 p.m., perfect time to grab a drink at the little beer stand with six or seven taps and check out the featured food truck in the back garage lot before the music. The venue was modern, but not eagerly so, and the above string lights added a refreshingly quaint touch. The small venue carried three separate but equal sections, one for the stage and benches, one for the cart bar and some picnic tables, and one for the garage lot, food truck and additional picnic tables.

For myself, I grab a hip hop-themed beer, and my friends get something similar. The drink has an organic taste to it, and is a step up from the piss found in many cheap domestic beers. For awhile, I couldn’t put my finger on what it tasted like until one of my friends aptly said, “this tastes like a Christmas tree.” The food truck was titled “The Chicken and Rice Guys,” so naturally all three of us bought chicken and rice, and ate it across from the brightly-painted garage doors in the back parking lot. It was a solid meal, and had somewhat of a kick to it. As we were an hour away from sunset though, the bugs started to come out, and one flew in my friend’s pine-fueled beer. Well, shit.

After she gets another beer, we head to what appears to be a column of socially distanced stone/granite benches that sit across from the stage. It’s an intimate setting, but also spacious enough to spread out a little bit. Diagonal from this area are steps that lead you to the aforementioned beer stand-with AERONAUT brightly plastered on it-and picnic tables with people chatting and enjoying their drinks. 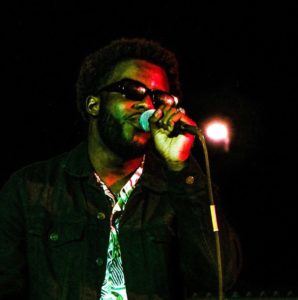 Jackson, the reflective and wide-eyed rapper from Randolph, begins the show right before dusk. He plays about six songs from his discography, including “Museum,” “Things Change,” Cinnabon,” “Vineyard,” “Aww Shit” and “We’re Still Sippin Teenies.” He helps to slowly gather the increasing crowd with relatable conversation starters, and asks how many people enjoy lasagna-an apparent focal point of many of the artist’s social media posts (I love pasta, so I’m already in). As a rapper, Jackson’s bars are just as genuine and engaging as his personality. At one point, he spits “I wonder what if I just stopped doing this, would I be alive/Cause I don’t wanna do 9-5 for the rest of my life like mom and pops” on “Museum,” and one of my friends assuredly nods with approval at the artist’s determination.

The equally thoughtful track “Aww Shit,” featuring Van Buren’s Luke Bar$, is a Saba-inspired search for self-actualization; “Cause if you know what I know/You would ask why it’s always me on the ropes/You’d ask what it really means to stay ten toes down for a vision that just wanna see you burn to the ground trying to get it.” A really solid set from the meticulous artist.

About a half hour to 45 minutes passes before talented Brockton singer Benjy Ali takes the stage with a smooth outfit and darkly-tinted shades. At this point, the sun has basically set, and blunt smoke is starting to fill the air, despite the No Smoking signs (much to my delight…free the weed). The bugs have left us alone, and instead have congregated below the garden’s string lights, buzzing in unison like protons ricocheting off each other. More people have gathered near the performance area now.

It’s the perfect setting for Ali’s confined, yet sentimental, ballads about searching for catharsis. Prior to his performance, Ali asks for a stool to sit on and set the atmospheric mood reflective in his music. Smart man too, because boy was it still a little muggy outside. His celestial track “Mistakes” is worth delving into his released music alone. Ali’s overall performance was much more reserved than others from the night, but the choice made total sense, as Ali’s music has a knack for grabbing your total attention. I don’t think I looked away from the stage the entire set, and my friends would probably say the same, as none of us spoke either. Stoughton artist A.Thibbz makes his first of multiple appearances through the night during this set, as well.

After some minutes past, THEV-who takes a more alternative/R&B approach to his music-graces the stage with a bevy of unreleased tracks for the majority of his set list. I tell my friends that his breathlessly glittering song “ON THE EDGE WITH U,” produced by PROSWERVEZ, is truly the one. To my excitement, he plays the emotionally-driven, cautiously lovelorn track. It’s even better live, especially considering how well it fits the thick warmth found in today’s forecast. That one is out on all platforms

The talented singer also plays “GO WHEREVER I GO,” “SPARKS DON’T FLY (feat. Jerm Sherman),” “IT’S EASY (PUT THE BLAME ON ME),” “BANKROLL,” “HEY HEYY HEYYY (IT WAS ALL A DREAM)” and “COLD BLOOD.” THEV makes a wise decision to enunciate parts of his tracks through A cappella before officially unveiling the instrumentals, basically in a way so the growing crowd can learn the lyrics. One of my friends especially enjoys “BANKROLL,” the combative chant dedicated to securing the bag. Even my calm and collected friend can’t help but yell “bankroll bankroll, bitch we like that/If you take those, take those, bitch we fight back.” My favorite of the list, outside of “ON THE EDGE WITH U,” is the harrowing “HEY HEYY HEYYY (IT WAS ALL A DREAM),” a punk-inspired piece of alternative with despondent undertones-“Hey, heyy, heyyy/I guess it was all a dream/Hey, heyy, heyyy/I woke up from all the screams.” We get all sides of the talented up-and-comer. 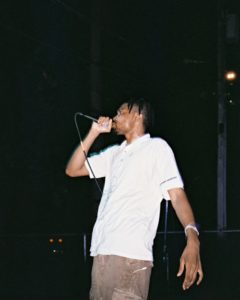 It is now 915ish, and the talented singer/rapper/producer JORD4NEVERDIED is up next. I’ve had a few drinks at this point, but I’m also sobering up because I still need to drive 10 minutes back to my friend’s apartment in Brighton. JORD4N’S eager to get on stage, which is admirable for someone about to perform live for the first time. His stage presence is impressive, and the multi-talented artist begins his set asking people to gather up front so he can feel the love. As “Away” plays, the spiteful intro track to his tightly-paced EP Blur, you can already tell that JORD4N is a great anchor for the night’s performances.

The majority of his set is dedicated to almost the entire EP, as well as a few unreleased tracks that sound even more polished to my ears, and only builds more excitement for what he has to offer. A.Thibbz returns to play a collaboration with JORD4N, and THEV joins him on stage to perform the misty “Conclusions,” a track that balances THEV’s emphatic vocals and JORD4N’S atmospheric annoyance really well (“Why you always jump to conclusions/why you speak on things you don’t know”). JORD4N adds some nice dimension to the tracks, explaining their inspiration through a club-induced lens to reflect the time of night, particularly with the uber-confident “Wyd” and the miffed “Conclusions.” He also riles up the crowd with a two-step dance, breathing even more life into the smoky, bug-filled night.

JORD4N ends the night with giving a shoutout to all of the performances, a perfect communal celebration for an evening filled with glowing positivity. JORD4N thanks his producers, from Sam Skully to Niko K, and hops off the stage to embrace his most ardent supporters. It’s a positive moment to end a positively-enjoyable night. The brief eye in the storm.