James Wan is one of the undisputed reigning masters of horror. With 2010’s Insidious and particularly the 2013 mega-hit The Conjuring, Wan ushered in a new era of studio horror filmmaking, handsomely shot and formally controlled, with A-list stars to give the proceedings a sense of dignity which had been lacking in the genre. But Wan’s most widely seen and influential horror movie is a different beast entirely. 2004’s Saw marked the unofficial start of the so-called “torture porn” era, and it was everything The Conjuring is not: a brutal, low-budget affair drenched in grimy flourescent lighting, herky-jerky camera tricks, and a veritable catalogue of nasty things which can be done to the human body. If one didn’t know better, one could scarcely guess that Saw was made by the same director as those later films; it feels like the work of a different filmmaker entirely.

I want to make it clear from the outset: Malignant, which opens this weekend in theaters and on HBO Max, is the work of the James Wan who made Saw, and decidedly not the James Wan who made The Conjuring. Whether this is a good thing or a bad thing is a matter of taste, but suffice to say that it is a gnarly, at times bewilderingly silly, but ultimately satisfying throwback to a simpler era of horror.

Madison (Annabelle Wallis) is haunted following an attack which claims the lives of her abusive husband and unborn baby. This is not a figure of speech: while the police chalk it up to an unusually brutal home invader, what we see indicates a supernatural presence. As Madison tries to put her life back together, she finds herself plagued by visions of grisly murders perpetrated by a deformed, stringy-haired killer– murders which she soon learns were actually happening in real time across town. Aided by her plucky sister Sydney (Maddie Hasson) and charming police detective Kekoa Shaw (George Young), Madison sets out to solve the murders, and put her own head to rest. 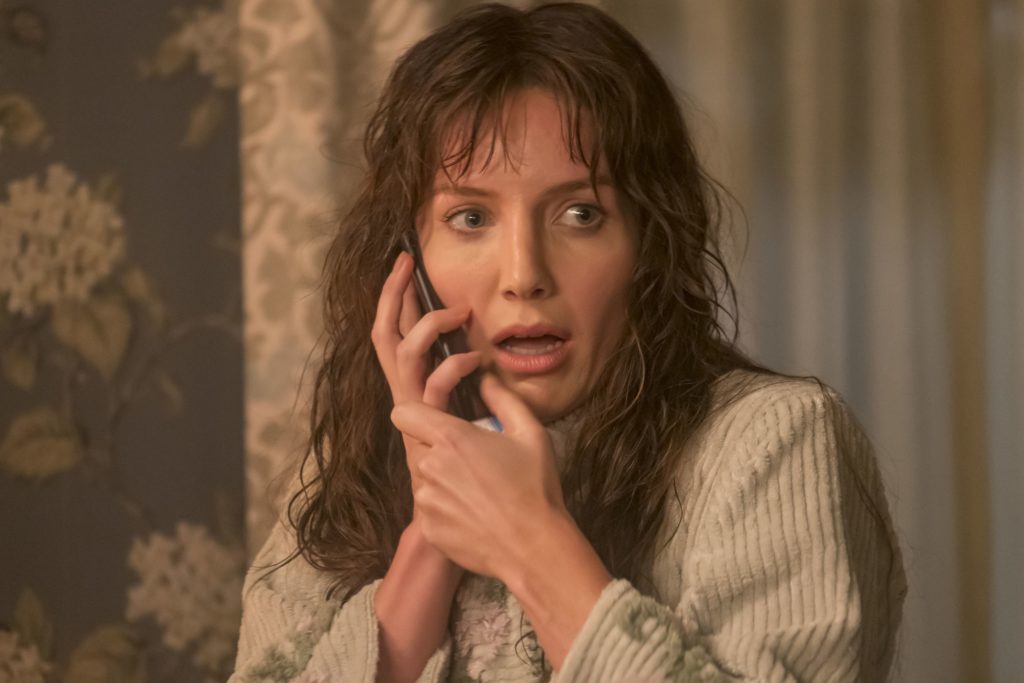 From the opening credits– which feature chugging heavy-metal guitar over CG-enhanced microscope footage– I felt like I was watching a movie out of time. Specifically, Malignant feels like an homage to one of horror’s least-heralded eras: the early 2000s. These years– which followed the wave of post-Scream just-kidding meta-slashers of the late ‘90s and preceded the blood-and-guts era ushered in by Saw itself– are rarely cited as a high water mark for the genre, and certainly felt like a dry spell at the time for this horror-obsessed teen. But, with the benefit of hindsight, one can appreciate a certain level of swing-for-the-fences abandon: the blackly comic excess of the Final Destination series, the supernatural wildness of Jeepers Creepers, the in-your-face William Castle Remakes House on Haunted Hill and Thirteen (er, Thir13en) Ghosts. There is a sense that the studios sensed that there was money in the horror genre, but they weren’t sure where, leading them to entertain an unusual number of high-concept original pitches.

It is this level of go-for-broke originality that Malignant seems to be going for. The killer, with his disgusting leather jacket and acrobatic physicality (brought to life by master contortionist and go-to creature performer “Twisty” Troy James) feels a little like a character from a nu-metal music video, and his weapon of choice– a sword-shaped medical award swiped from one of his victims– is a brilliantly stupid slasher-killer move. The characters are broadly drawn, and mostly act to good-naturedly advance the plot (or, of course, die messily). Even the film’s widescreen establishing shots and melodic orchestral score (as well as its central soundtrack motif, Safari Riot’s pulsing electronic cover of the Pixies’ “Where Is My Mind”) make it feel like something I would have seen in a strip mall multiplex in high school. With the imminent twentieth anniversary of 9/11, there’s been a marked increase in nostalgia for the turn of the millennium, but I truly did not expect that it would take this particular form.

Then there’s the ending. It is, of course, verboten for a film critic to reveal a movie’s third-act twist, and I wouldn’t dream of spoiling the surprise, but I will say that the big reveal is absolutely the reason you want to see this movie. I watched Malignant via a digital screener link rather than at an advance screening, and I’m glad I did, because when the big money shot happened, I physically could not stop myself from barking out loud in disbelief. I spent the final twenty minutes or so of the film slackjawed, my mouth open in a big, silly grin. After the film, my partner, who was listening from the other room, said, “All I could hear was a lot of extreme violence, and you just chuckling!” Again, whether you read this as a recommendation or a warning depends on your disposition, but I was utterly, unironically delighted.

Make no mistake: Malignant is not a “good” horror movie in the sense that we’ve gotten used to in the days of Get Out or A24 (or, for that matter, latter-day James Wan). It’s overlong, and its story is much more convoluted than it needs to be; the murders don’t even begin in earnest until the half-hour mark. Yet I found something refreshing about a major studio horror movie with the confidence to be messy. It makes an interesting counterpoint to something like The Night House. That film, which I quite liked, channels its supernatural terror through a quiet, powerful portrait of all-too-human grief. The inciting incident of Malignant is, on paper, every bit as devastating as the central suicide of The Night House, but Wan instead uses it as a springboard to dive headlong into all manner of gnarly shit. This is not “elevated horror,” but rather a true-blue exploitation film which is more than happy to remain in the gutter. Like Sam Raimi’s beloved 2009 return to form Drag Me To Hell, Malignant finds Wan letting his hair down and bringing his masterful touch to the lurid material that made him a star. Is it a modern classic? Probably not. But the more I think about it, the more I think I loved it.

Opens Friday, 9/10 in theaters, and streaming for a limited time on HBO Max