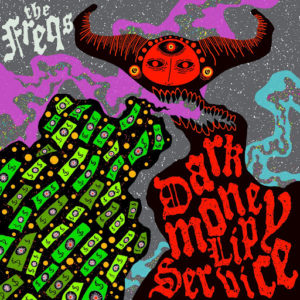 The Freqs (pronounced Freaks) are a Boston noise rock trio that isn’t afraid to shy away from the more melodic aspects of their chosen genre. Track two of their forthcoming EP Dark Money Lip Service, “Elizabeth,” demonstrates the polarity of the band’s sound. The track starts with a plaintive, slow-rock vibe, rife with cooing background vocals and sparkling guitars, before descending into utter madness.

Owing as much to stoner rock and post-hardcore acts like Queens of the Stone Age and At the Drive-in as the band’s noise rock roots, it’s the propulsive drum performance and unhinged vocal approach that anchor “Elizabeth.” The track’s manic conclusion features a crescendo that seems almost impossible. Just when you think the band has stoked up the mayhem as high as humanly possible, they continue to find new ways to push the sonic assault to soaring new heights. The result is something that sounds like a Kubrickian psychological thriller distilled into a two minute and fifty second blast of guitar-driven fury.

Dark Money Lip Service, available via the Freqs’ Bandcamp and other major music streaming services, is packed with equally dense, multi-phased, and furiously performed tracks. But it’s “Elizabeth” that provides the most potent contrast between the band’s penchant for quite gorgeous textures and utter bombast.