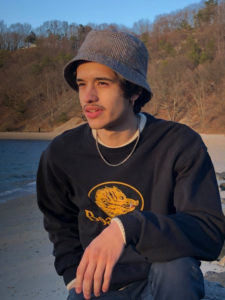 Alternative composer Sean Abrams has shared another ground-breaking piece this year called ‘Extra Terrestial Baby,’ and I had the honor of meeting with him to get a closer look at its meaning, as well as to discuss his avant-garde approach to music. Read on to get a dissection of Sean Abrams’ sound and how that has translated to this more modernized single that is out of this world, just like its creator.

‘Extra Terrestrial Baby’ was not at all what I was expecting it to be when I first heard it. In fact, it nearly resembled the feeling of walking through a haunted house–in the best possible way.

The song then unfolds with unexpected notes and elements shifting gears like moving staircases until they finally melt together in a way that almost makes the music comparable to something you might hear Mac Demarco create. Almost.

I first asked Sean about his influences. If you take a look at his artist bio on Spotify, he lists a dynamic range of inspirations from experimental composers such as Moritz Moszkowski to beloved rock band Muse. He explained how these artists challenged him as a listener and motivated him to create art that does the same for others.

Sean: “Most people aren’t up for a challenge when they listen to songs, which is totally understandable! Music should be enjoyed in every capacity that it comes in. But, for me, I always sought out more unique and unusual artists who created the kind of music that you aren’t used to hearing every day.”

Sean talked to me further about how he often likes to venture outside of traditional western music theory and mentioned, as an example, how scales in eastern music are approached. (Check out this video on Western v. Eastern music theory if your interest is piqued as much as mine was.)

Sean: “It’s hard to explain, but the most important thing to know is that the way that we’re taught music here is not the only way we have to go about exploring it.”

There’s something notable about an artist that’s willing to grow their own perspective in their creation process and pass that knowledge along through their work. This is exactly the type of artistry you’ll find with Sean.

All of this and more is heard when listening to ‘Extra Terrestrial Baby.’ Even through the lyricism, you can see how the artist explores an outsider’s perspective.

Sean: ‘Extra Terrestrial Baby’ is about craving authentic connection… I realized that I wanted to be able to talk about things that mattered with the people I spent my time with, and if I couldn’t do that, I was better spending time alone, making art, and doing things I love.

This idea is beautifully painted into the piece with imagery of a lone subject who maybe isn’t so alone after all: “Sitting in silence/ counting my toes/no friends around/accompanied alone.” The lyrics come with company as well, that of obscurely distorted yet beautifully melodic guitar, cymbals that perk up the ears at just the right time, and temperamental drumming that all build up throughout the song in a perhaps not-so-comfortable but beguiling way.

My final question for Sean was what exactly does he want his listeners to get out of his work with Extra Terrestrial and his collective work.

Sean: Again, I just want people to get a different experience and a widened sense of what music can be and what it can do for both artists and those who enjoy their art.

If you want something different, if you want something fun, or if you really like Muse or the song ‘Haunt’ by Daniel Johnson, be sure to learn more about this fantastic piece and artist here, follow Sean on social media, and check out his latest release ‘IV‘ on Spotify!