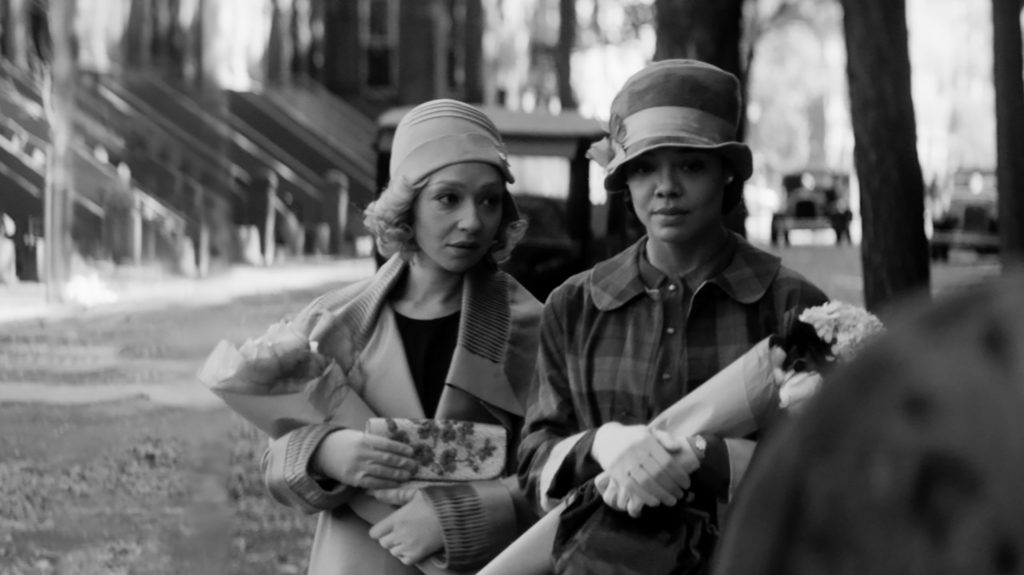 Based on Nella Larsen’s 1929 novel, Passing, notable actor Rebecca Hall makes her directorial debut with a film whose existence feels improbable if not for Netflix: an earnest black and white film about Black women “passing” as white in a 4:3 aspect ratio with a forceful cast. With the current cinematic landscape being paved by the glaciers of Marvel and further confined by the limited theatrical releases of the Covid-era, movies like this don’t excite box-office hawks and don’t get greenlighted.

Netflix, less concerned with box office numbers than creating a diverse library of original films, is the perfect home for Passing. (I presume their prioritization of creating their own library is to become less reliant on renting the rights to films from other companies.) Regardless of its quality, its pure existence may be a sign of hope to cinephiles.

This film had to be monochromatic. This choice allows the shades of skin tone to garner more attention, pushing color to the side: the lights and darks blend and become not quite one or the other. Irene “Reenie” Redfield (Tessa Thompson), in a rather unbelievable circumstance not worth attending to here, runs into Clare Bellew (Ruth Negga), a friend from her childhood. This happenstance encounter wouldn’t normally catalyze a plot, but the white-passing Clare, wrapped in 1920s decadence and a white woman’s hairstyle, is married to a vulgar bigot (Alexander Skarsgård as John Bellew) unaware of his wife’s true race. John intrudes on the meeting of Clare and Irene, littering the conversation with racial slurs. Irene has no choice but to laugh and smile on the exterior, but internally Thompson bubbles with discomfort and haste. Their random encounter ignites a racial awakening of sorts for Clare, who consequently seeks out Irene.

At just 98 minutes, Passing doesn’t feel as emotionally burdensome as it should. Clare’s possibly adulterous relationship with Irene’s husband Brian (André Holland) never lands. Perhaps the script (and/or the source material) intends this possible affair to mirror Clare’s desire to enter a more thoroughly Black life—and she does this by co-opting Irene’s husband. But in the end product, the affair proceeds too quickly and almost exclusively from the perspective of Irene’s jealous eyes rather than from Clare’s racially-confused and pained desires for this to work.

Several of the film’s best shots are also rushed. When Clare barges into Irene’s home the first time, there is an excellent two-shot with Irene’s back in deep focus on the left while Clare’s front is only visible through a mirror on the right of the screen, the two divided by negative space. The shot abruptly concludes before the viewer can decipher it in the context of the two’s relationship.