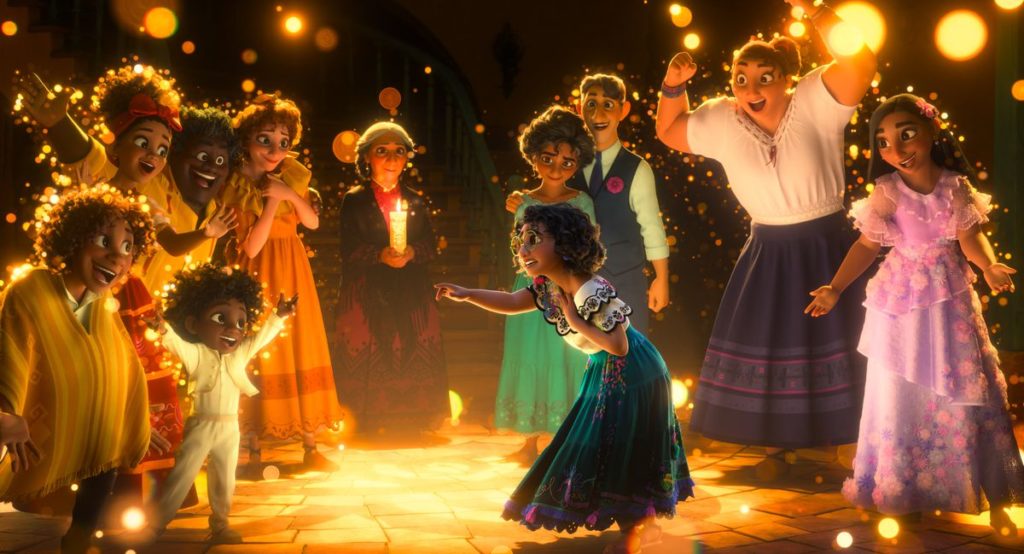 Encanto, directed by Byron Howard and Jared Bush (Bolt, Tangled, Zootopia), proudly announces itself as Disney Animation Studios’ 60th feature. It’s hard to believe the 50th was Tangled, all the way back in 2010. Despite Disney’s business plan of gross excess, they’ve managed to keep this brand relatively tamped down. Ralph Breaks the Internet (a movie I like, but I am insane) and Frozen II (bonkers flick) are the only official sequels in this oeuvre besides The Rescuers Down Under. WDAS is one of the only places in the company where originality is still a focus, though there’s an obvious formula often at play. Encanto does not try to reinvent this formula, but it’s still a fun movie about a family that just needs to chill the hell out.

The Madrigal family, introduced in a Belle-esque musical number full of exposition and dancing, live in a magical house in a magical valley somewhere in Colombia in the early 1920s or 1930s (I think? I am not well-versed on Colombian history, but no one has cell phones or TVs). The matriarch is Abuela Alma (María Cecilia Botero), whose cries of anguish at the noble sacrifice of her husband 50 years ago created a miraculous flame that spawned the house from nothing and shielded her and her children from nefarious marauders. Can’t get much more magical realism than that. Abuela’s children were gifted with magical abilities, as were their children– except for our protagonist, the bespectacled teenager Mirabel (Stephanie Beatriz). In a house full of enchantments, Mirabel’s magic never manifested. The family doesn’t like to talk about this, and neither does Mirabel. Of course, that repression can’t last, especially when Mirabel’s younger cousin, Antonio (Ravi-Cabot Conyers), receives his gift and the entire family celebrates with a palpable sense of relief.

In the middle of a strikingly animated musical number that features time slowing to a crawl while Mirabel laments her lot in life, the magical house starts to crack. Abuela doesn’t want to believe it, but Mirabel knows what she saw. If she can’t have a gift, she can save the miracle itself. To do so, she’ll have to get her family to acknowledge that they’re not actually perfect, even her sisters Isabela (Diane Guerrero) and Luisa (Jessica Darrow) who are carrying the future of the Madrigals on their shoulders. If the house falls, the village falls, and Abuela’s dream of safety for her family falls too.

What separates Encanto from other recent Disney films is that it allows Abuela to take the role of main antagonist. She’s not an outright villain, of course, but she’s stubborn and ready to snuff out dissent. No one wants to cross her, lest they be cast out like the estranged prophet Bruno (John Leguizamo), who disappeared from the family under mysterious circumstances. I honestly thought Abuela was going to slap Mirabel at one point. They never do come to blows, but the stress of Abuela’s expectations forms the backbone of the story. A villain like Ursula could never be as scary as the fear grandma will stop loving you if you’re not playing your role.

The lighting and character animation continue to impress, though each advancement starts to make the previous films look worse (not that I’m trying to revisit Meet the Robinsons anytime soon). If we’re stuck with CG animation, I want it to be doing what Encanto is doing. There are actual musical numbers -written by noted theater dork Lin-Manuel Miranda- that break the laws of reality, not just “singing in a room” moments that make up most of Frozen. Luisa’s solo features dancing donkeys and a Cerberus battle, while the standout song “Waiting on a Miracle” takes place during the flash of a camera bulb. I wouldn’t expect this soundtrack to net Miranda his Oscar; there’s nothing here that reaches the seismic experience of “Let It Go.”

Much like Pixar’s Coco, I’m sure Encanto plays well in the Colombian Spanish-language dub. There’s a lot more untranslated Spanish in the film than I expected, including an entire song that plays near the climax. If Disney is going to dip into a different culture for each film, they shouldn’t be afraid to really commit. Overall, I did prefer Encanto to Raya and the Last Dragon, which got a bit lost in its epic storytelling. Encanto manages to tell an even grander emotional story while barely leaving the house.