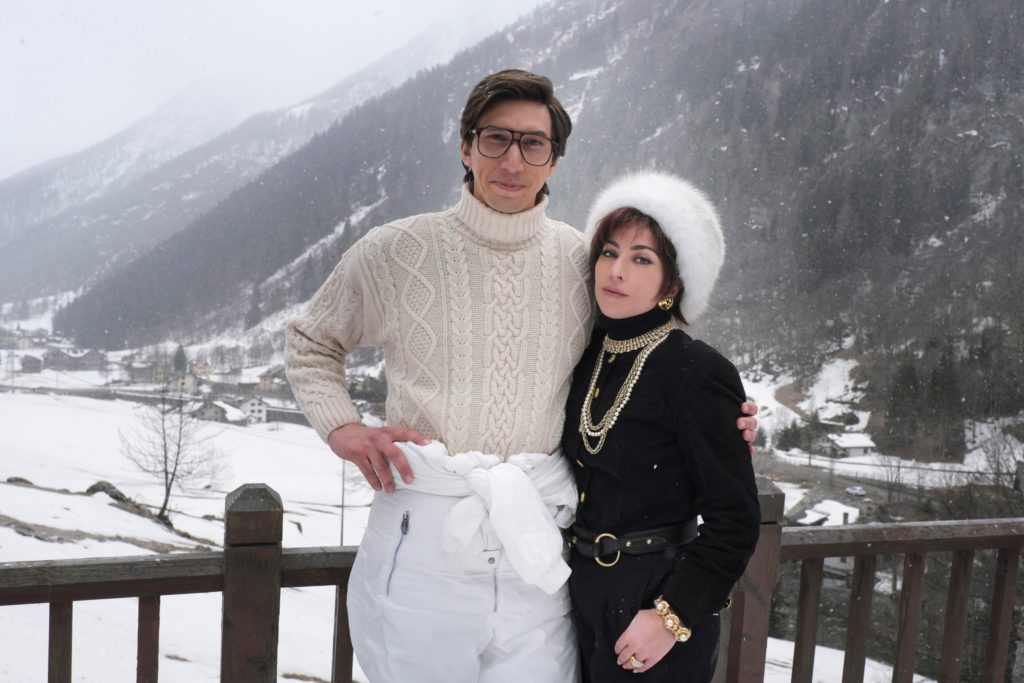 I’m not entirely sure how to review House of Gucci.

On its face, Gucci is something we’ve seen before: a standard-issue rise-and-fall Hollywood true-crime biopic, documenting the dizzying highs and seedy lows of fashion scion Maurizio Gucci (here played by Adam Driver) and his wife, Patrizia (Lady Gaga). It’s a naturally compelling story, filled with sex, betrayal, murder, and high-’80s decadance, and it’s told well enough by Ridley Scott, one of Hollywood’s most reliable craftsmen. Yet it seems safe to say that a relatively small portion of its audience will be going to see it for the tale at its core.

Indeed, while I was watching House of Gucci, I didn’t find myself comparing it with other, similar biopics. Rather, I was reminded of Destroy All Monsters, the Toho smash-em-up which threw Godzilla, Rodan, and every other rubber monster suit in their closet into a plot-second free-for-all. The pleasure of House of Gucci does not lie in the Gucci family itself, but rather in watching six talented thespians devour the scenery like it was covered in Worcestershire sauce. Scott seemingly gives his actors free reign to go as big as possible, riffing off of each other like Berklee guitar noodlers; every scene feels like a game of one-upmanship, with each actor attempting to outdo their co-stars with bigger outfits and more outrageous Chico Marx accents. I’m not sure that it’s “good,” but I’m here to tell you that it’s fucking great.

Given all this, I’m not sure I can give House of Gucci a “review” in the traditional sense. Since each actor appears to be working in their own personal film, it seems only right to review each performance individually, then circling back to whatever is left of the movie itself. So let’s get to it!

ADAM DRIVER: As the romantic lead and heir apparent to the Gucci dynasty, Driver is tasked with playing the straight-man, and this is indeed the “straightest” role of his career. Driver’s idiosyncratic brand of offbeat masculinity has largely filled his impressive young career with glowering loners and anguished Bohemians. Here, Driver has been cast against type and done up in nerd drag, all turtleneck sweaters and oversized glasses and short, perma-pressed hair. Early on in the running time, I jotted down the note “What is he doing with his face?” only to slowly realize that this is the first time I’ve seen Adam Driver smile for any extended length of time. Maurizio Gucci is perhaps the most “normal” human being Adam Driver has ever been asked to play, and the resultant energy is, paradoxically, weird as all hell.

LADY GAGA: Of all the cast members present, Gaga perhaps has the most to prove; her seeming sure-thing Oscar role in 2018’s A Star Is Born failed to return anything beyond an Original Song statue (that she lost to Olivia Colman in The Favourite, easily the most beloved Oscar-winning performance of the past decade, means she can’t even claim she was robbed). Here, she seems to be trying to act Oscar into submission. Gaga’s Patrizio doesn’t speak so much as hurl words across the room; she uses her accent (which may or may not be Italian) as a cudgel, discovering exciting new pronunciations for simple words like “cretin.” Even when she’s not speaking, Gaga’s Patrizia is often the loudest person in the room, perpetually wiggling her frame and shooting daggers in every direction with her eyes. Like much of Nicolas Cage’s CV, Gaga’s performance here begs the question of what, exactly, “good acting” is; for my money, a performance this entertaining can’t possibly be considered bad.

JEREMY IRONS: Irons plays Maurizio’s cool-headed father, Rodolfo, as a sort of genteel aristocrat; he is kind and supportive of his son, right up to the point where he says or does anything that threatens the order of the family’s perceived nobility. Irons is here doing a European variant on the gruff kinda-accent he used in HBO’s Watchmen series, and gets to prove once again that there is no bon mot which can’t be made infinitely more withering by being placed in Jeremy Irons’ mouth. But Rodolfo was also a fading star of the early silver screen, which allows Irons to play his own variation on Norma Desmond. Irons spends much of the movie sitting in darkness in his palatial estate, projecting his own movies, his sunken eyes and pencil mustache giving him the impression of a mummified Rudolph Valentino. The next time I have to take a sick day, I will do my best to embody Irons in this movie. 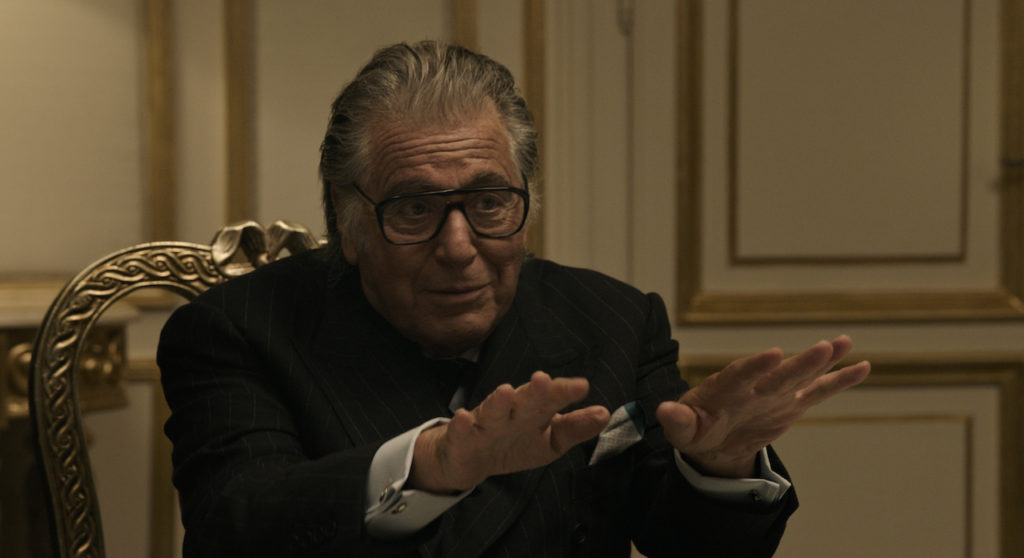 AL PACINO: Al Pacino plays Rodolfo’s outgoing brother Aldo, but really, he plays Al Pacino. Pacino is one of those actors who has leaned into his trademark quirks in his old age, and his role here finds him at his most hoo-ah; it’s very possible that he does not utter a single line in House of Gucci which is not followed by at least one exclamation point. However– and I want to be very clear on this– this is a feature, not a bug. Pacino is a great actor, but, just as importantly, he’s a fun actor to watch, and still seems like he’s having the time of his life. As in The Irishman, his performance here makes me feel grateful that we still get to watch this 81-year-old legend scream his way through a three-hour movie every couple of years.

SALMA HAYEK: One could be forgiven for not realizing going in that Salma Hayek is in this movie– she is curiously absent from most of the promotional materials, perhaps because she’s the only member of the central ensemble not playing a Gucci– but I feel I need to give her her due, as her work here is just as nutty as that of her peers. Hayek plays Pina Auriemma, Patrizia’s personal psychic advisor and confidant, as a sort of Greek chorus, counseling Patrizia at each major act break. In these scenes, Hayek sits in a candlelit apartment filled with cats, giving ominous tarot readings and receiving visions specific enough to push the entire film into magical realism. It’s a relatively small role, but Hayek wrings every drop from it. 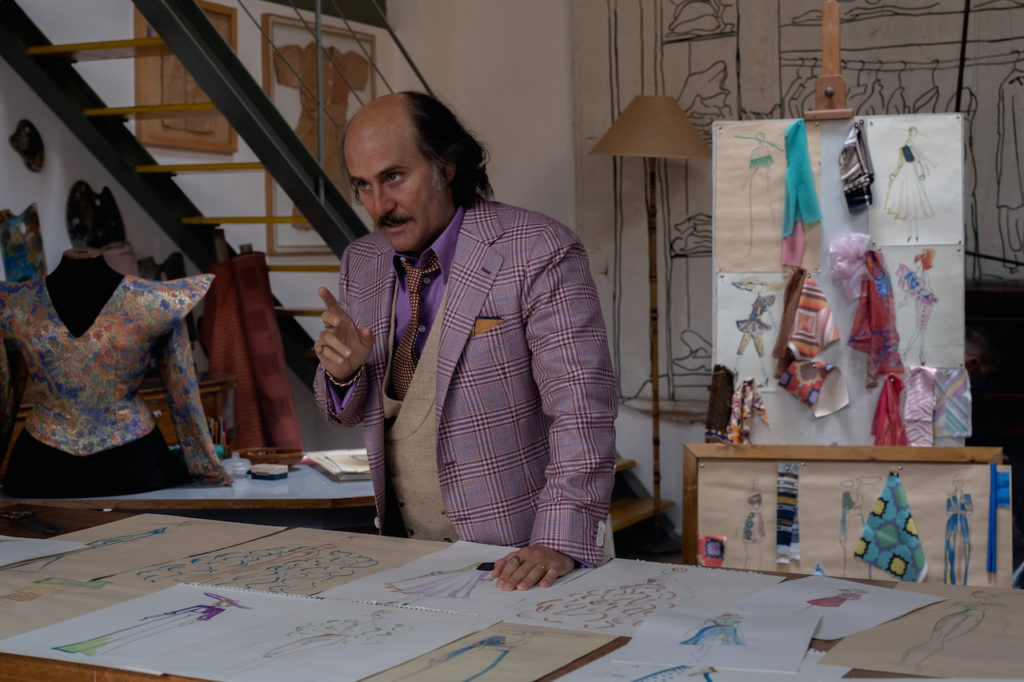 JARED LETO: This one is the damnedest thing. Regular readers of this site will know that I generally have little use for Jared Leto as an actor (his performance in The Little Things may have my vote as the worst of 2021). And, even after watching the film, I have no clue what could have inspired Scott to cast him as Aldo’s talentless blowhard son Paolo, a role which buries the actor under mountains of prosthetics to make him look like Jeffrey Tambor. And yet– and I can hardly believe I’m typing these words– Leto is… good here? Maybe great even? In a cast full of larger-than-life performances, Leto’s is perhaps the largest, a wild-eyed, flop-sweaty tour de force topped with the most ridiculous “It’s-a me!” accent heard on screen since Vaudeville days. One can easily accuse Leto of trying too hard with his method actor affectations, but I found myself smiling every time Paolo showed up in a scene, so I can’t say whatever he’s doing here isn’t working.

These six performances are the bedrock of what makes House of Gucci work. Like a great sitcom, the fun is in the different combinations in which the film pairs them off: Driver and Gaga meet-cute in a glitzy club to the strains of ABBA; Irons verbally dismantles Leto brick by brick; Pacino offers Gaga avuncular advice while also undeniably hitting on her. There is at least one scene which consists of nothing but Pacino and Leto taking turns screaming, and it’s delightful. When a character dies, one mourns not out of empathy with the character, but for the fact that we don’t get to see the actor play them anymore. The pleasures of House of Gucci are largely metatextual, but they are immense?

So what of the movie underneath these performances? It’s not bad! The structure is one we’ve seen countless times before: the humble beginnings, the meteoric rise, the cracks in the façade, the grisly conclusion. There are times, for sure, when the mechanics feel all too mechanical (the failure of the central couple’s marriage, in particular, feel sudden and programmatic). But these beats are enshrined for a reason, and Scott, a master of pop entertainment, keeps things moving at a lively pace. Like 2019’s Knives Out, House of Gucci is a perfect piece of Thanksgiving weekend counterprogramming: a raucous, deeply silly tale about a family just as dysfunctional as yours– but probably better looking.