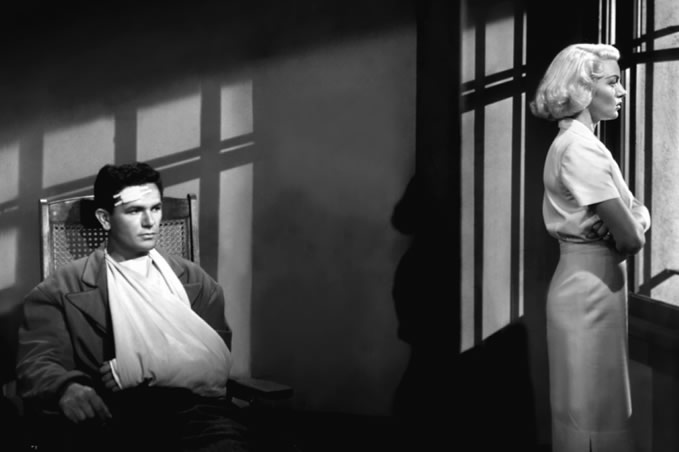 Rarely do protagonists truly win at the beginning of the film. No one comes to see fictional characters hit a home run in their first inning and slide their way into happiness because conflict is the headliner and suffering is an art.

“Why do you keep looking for new places?” a man asks drifter Frank (John Garfield) before dropping him off at Twin Oaks, a restaurant/auto service station. His schtick: Frank’s “itchy feet” can’t be anchored (to a town, a person, a life). Still, he begins working at Twin Oaks, which is owned by Nick (Cecil Kellaway). Cora (Lana Turner), Nick’s wife and a woman who looks misplaced in Nick’s humble ins and outs, catches Frank’s eye. After starting an affair, both Frank and Cora become the camera’s mischievous glints that don’t quite dim even after they get what they want. Eventually, they get to the notion that to really be together, they have to kill Nick.

Despite taking place in a countryside-type settlement, the story sells the Hollywood complexity of a greed that can’t be tamed. A type of relentless hounding ricochets between the characters in different forms: Frank for a fleeting type of fun, Lana for a far-dreamt independence, and maybe even Nick for his physical shortcomings in the marriage’s apparent unevenness (a man feeling inadequate from the presence of a woman and showing it through passive aggression — a tale as old as time). As Frank and Lana’s desires darken their motives into criminal behavior, District Attorney Sackett (coincidentally the same man who dropped Frank off at the diner) is able to exact the action points of their plan, heightening the urgency for an actual escape plan.

Why does the postman ring twice? James M. Cain, who wrote the original novel source, had been looking for a showy title for this story. While waiting for correspondence from the producers, he found that the postman indeed always rang his doorbell twice to make sure that the mail is delivered. It’s an unusual title that works in the looming lesson that hovers over Frank’s and Lana’s misdeeds: even when the taste of freedom seems lasting, justice will somehow prevail. The Postman Always Rings Twice is worth viewing over the despairing idea that we can ask for more than what we’re given. Getting away with what we want feels good at the moment, but for the big dreamers, old habits die hard.