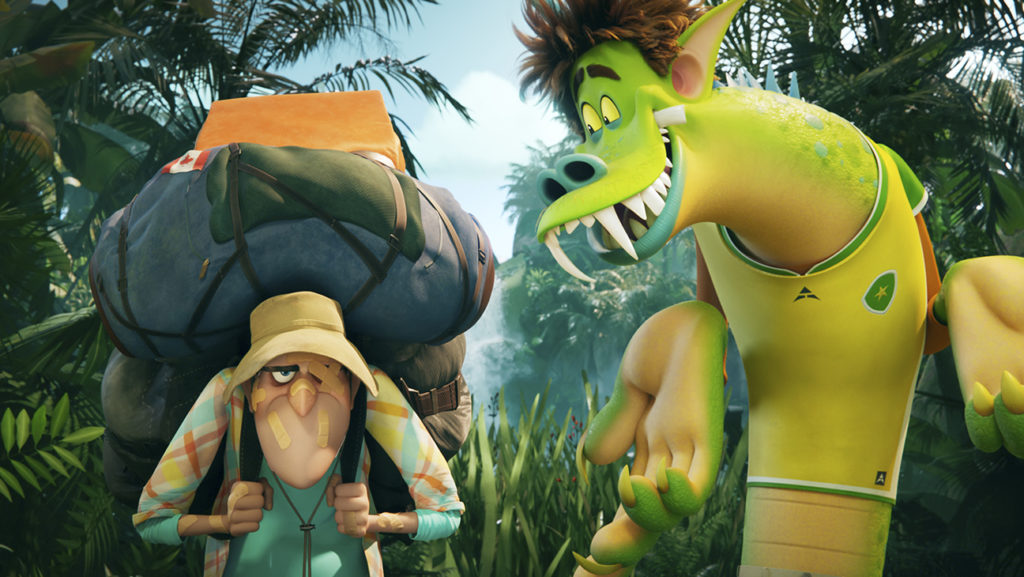 After 125 years, Count Dracula (Brian Hull) has decided it is finally time to retire and pass the hotel onto his daughter Mavis (Selena Gomez). Unfortunately, Drac realizes this means the hotel will also go to his human son-in-law Johnny (Andy Samberg), whose goofy crunchy granola lifestyle is often a thorn in Drac’s side. Instead of sucking it up, Drac lies to Johnny and says the hotel cannot be owned by a human. Johnny takes this to mean he must become a monster, so he turns to Van Helsing (Jim Gaffigan) who provides a “Monsterfication Ray.” After some of the Looney Tunes-style mayhem for which the series is known, Johnny turns into a dragon monster while Drac and his friends are reduced to regular humans. There would be no movie if this could just be reversed, so Drac and Johnny must travel to the deepest jungles of South America to find a magic stone to power the Monsterfication Ray before Johnny turns into a mindless beast.

If there’s any reason I am reviewing this, the fourth and final Hotel Transylvania film that is skipping theaters and debuting on Amazon Prime this Friday and also has a YouTuber with a Dracula impression taking over for Adam Sandler in the lead role, it is this: these films are marginally better than they look. They’ve got basic pop culture jokes, bathroom humor, corny emotional moments, of course, but they also move like cartoons. There’s a rubberiness here that so few CGI films even attempt to employ. Genndy Tartakovsky, director of the first three films and screenwriter for this one, believes in the cartooniness of cartoons more than anything else. We should expect nothing less from the man who gave us Dexter’s Laboratory, Samurai Jack, and Primal. He is a genius.

Transformania runs 85 minutes, punching just above the level of a straight-to-video sequel. It is zippy, zany, wacky, everything in between. Perhaps a more discerning fan of animation would watch this on mute to better appreciate how these characters move, contorting themselves into shapes that would make Tom and Jerry proud. I can’t really defend watching all four of these things, but I sure did. I saw Hotel Transylvania 3: Summer Vacation alone with my dearly departed Moviepass. Remember that? Transformania is about as good as that one, and both are better than 2, which felt more like three episodes of a failed TV show thrown together. It also works surprisingly well as the finale of the series, bringing to an end the conflict between Drac and Johnny, though still not giving Mavis much to do. Selena Gomez got that executive producer credit though, so clearly she’s not all that upset.

Basically, if you need something to put on for your children and you’re tired of the Minions, try these movies. You might laugh a couple times! Also, there’s a giant purple guinea pig who spits fire. Surely that must count for something.