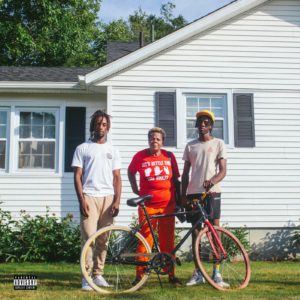 The values derived from your immediate family can dictate the path in which you grow, learn, and stumble your way through life.  For those who have the privilege, growing within an household filled with genuine, unconditional love can lead to some of your most cherished moments in life when you think back on them a decade down the road.

When you listen to a track like “Grateful,” a single off of Clark D and Guyclaude’s new album A Family Affair, those fleeting moments of growth and happiness return as a guiding light for whatever vices may impede one’s path. The beat sways with an undeniable warmth, as both Guyclaude and Clark D-who are immediate brothers-graciously croon with cathartic reflection; “I’m better than I was in the past,” sings Clark D on the chorus. Later on, Guyclaude matches the warmhearted energy-“These days, I remember when/They say it’s the little things/I see what they mean now.” The track-a centerpiece for the album-mimics the sun breaking through after a a heavy thunderstorm.

In an interview on Bad For the Community (the excellent artist-driven local podcast), Clark D and Guyclaude talk about reaching into one’s subconscious while alone and capturing moments in time that are transient by nature, but all the more meaningful. Thematically and tonally, A Family Affair-released at the end of 2021-plays like an unearthed time capsule filled with family-oriented vignettes and warm embraces. Entirely produced by both artists and mixed by Clark D, the album captures soulful R&B and candid raps with a delicate touch. 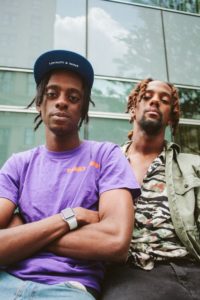 For Clark D and Guyclaude, growing up in a traditional Haitian household in the Hyde Park neighborhood in Boston allowed them to prioritize hard work and family from the early onset, something that is confidently reflected in their music and how they move. Both have been making solo music for the past half decade or so, and in 2018, the artist-producer duo established Family Famous, a music and media group focused on community and support. The collective sold out the Family Famous debut annual concert in 2018 at the Black Market in Roxbury, as well as the second concert in 2019.

While each has released their own solo projects, and will continue to do so (Clark D is releasing a three-song project on Jan. 18 titled Cap Pack, according to his social media), A Family Affair embodies the spirit of each artist’s vision through philosophical collaboration. “Take Time,” another ruminative highlight on the project, begs questions we all consider in a capitalistic country that can barely find itself slowing down, even as a deadly virus continues to shrink our walls. The track encapsulates the pressure and frustration many feel, when finding enough money to simply live runs parallel with chasing one’s dreams-“My momma, she tells me don’t rush shit/But I see the pain in her eyes/She said look up when it rains/But I see the cracks in skies.”

“A Family Affair was like a cathartic breath of fresh air,” Clark D told me over email. “My first time doing a collaboration project and it was done in the best fashion possible: with my brother. Over the pandemic, my brother and I had the opportunity to sit down and create music after having conflicting schedules for so many years.”  Guyclaude shared similar sentiments about the project’s creation: “A Family Affair, to me, is the sort of release that is not just essential because of who we are as artists and our need to express ourselves; it’s essential because of its impact and relatability. It’s more than time spent making music; it’s time spent creating a message. A Family Affair is an opportunity to take a moment and be introspective with or without the company of your tribe, the family. And we hope that the music we follow up with will continue to curate a world for our tribe.” 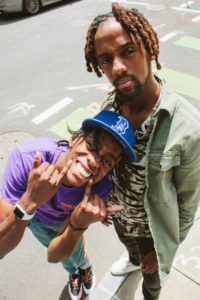 While family is the most important driver of the album, what makes A Family Affair a worthwhile listen is the instinctive versatility from a stylistic and conceptual standpoint. From the vivid scene-setting with Boston legend Michael Christmas on “A Family Affair/Quarantine,” to Guyclaude’s resplendent duo with Miranda Rae on “Here We Are,” to the brothers’ relatable encounter with a false sense of wealth due to financial liabilities on “CAROUSEL,” the album in its fullest form feels unapologetically lived-in. It almost feels as if Guyclaude and Clark D are giving listeners a tour through their childhood home while simultaneously telling stories of past memories and relationships, and how these experiences helped them learn along the way.

According to Clark D, the brothers were able to create a dedicated space in their house near Boston with the help of their mother, and turn it into a recording studio. From 2019-2021, that room became their basis of operation until both artists moved to Atlanta. “That room, which we call our ‘Living Room Studio,’ paved the way for us to come together and create A Family Affair,” said Clark D. “With a bunch of new equipment, my brother and I were able to take our time on this project to craft a unique listening experience that pushed sonic boundaries.”

It’s interesting that Clark D described the project as a time capsule that anchors him to his thoughts and feelings felt during the pandemic. A Family Affair to me reflects the learning, the growing, the choices we made along the way and how those same choices and experiences shaped us during a unique time period in our lives. At the end of 2020, my beloved grandmother on my dad’s side died of natural causes that were unrelated to COVID-19. She was probably one of the most selfless and compassionate human beings I’ve ever met, and is still the major connection to our humongous family lineage (filled with over 30 cousins at this point). Days before she passed, she left a voicemail on my phone saying how proud she was of me, thus presenting a time capsule of my own. I still have the message to this day. When I listen to the album, it reminds me of those fleeting moments when I used to visit her house for sleep overs, parades, cookouts, and everything else in between. The little things that made me.

A Family Affair is special because it hits on those personal moments while feeling universal. It doesn’t look down upon you, but rather embraces you. It’s the type of project that stays with you, even when you move away.

“The album is a reminder of the importance of family, and will serve as a memorial archive of that time period in our lives,” adds Clark D. “After moving to Atlanta, our lives are much different now, and watching all the videos of us recording and making the album, it feels good to be reminded of where we came from.”

Listen to the project below, as well as the music videos to “Grateful” and “CAROUSEL.”