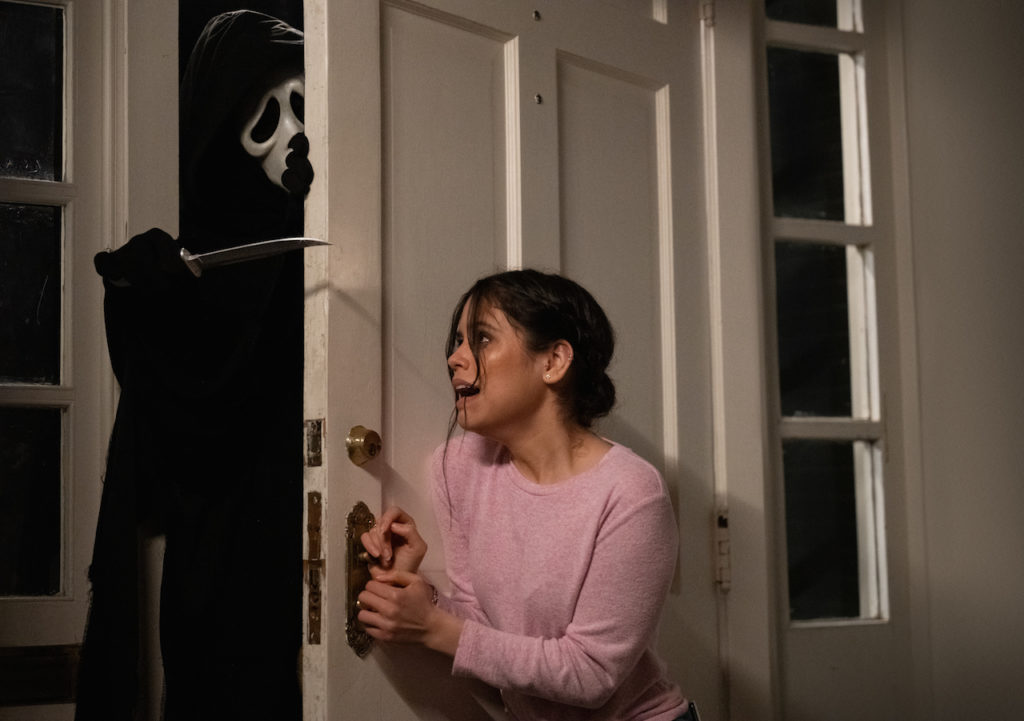 If Randy Meeks, the horror movie know-it-all played by Jamie Kennedy in 1996’s Scream, had survived enough sequels to see the series’ latest installment, he would almost certainly approach it with skepticism. It’s yet another attempt to revive the oh-so-’90s flash-in-the-pan franchise, no doubt resurrected in a cynical play for some of that Force Awakens nostalgia money. It is the first entry in the series made without the involvement of legendary horror director Wes Craven (who died in 2015), and the first in which series creator Kevin J. Williamson does not receive a screenplay credit. It comes on the heels of the little-loved MTV adaptation, which tried to mold the series into a zoomer-oriented soap. Most troublingly of all, the studio pushed its release to January of all months, that notorious theatrical dead zone which has long served as a burial ground for disreputable genre fare.

Like most critics, I’ve got more than a little Randy Meeks in me, and as such I approached the latest Scream movie, simply called Scream*, with all due caution. To all the Randy Meekses reading this, rest assured: the new Scream is not only good, but an honest-to-god Scream movie.

The ‘22 model begins, as it must, with a teenage girl (Jenna Ortega this time around, as the cheekily named Tara Carpenter) getting a creepy call from an unknown number quizzing her on horror movie trivia (“I’m more into ‘elevated horror,’” she demurs) before being brutally attacked in her home by a masked killer. In a series first, Tara survives, and is visited by her estranged sister Sam (Melissa Barrera), who reveals a dark family link to the events of the first film (this in itself shouldn’t constitute a spoiler– it is, after all, one of The Rules). Sure enough, the town of Woodsboro, California is once again beset by a killer (or killers) armed with a Father Death mask and a Roger L. Jackson-soundalike vocoder. To stop the murders, Sam and her boyfriend Richie (Jack Quaid) must inevitably call upon the original’s holy trinity of survivors: goofy lawman Dewey Riley (David Arquette), TV journalist Gail Weathers (Courtney Cox), and final girl Sidney Prescott (Neve Campbell). Meanwhile, of course, Woodsboro’s latest crop of expendable teens (including Mikey Madison, Dylan Minnette, Jasmin Savoy Brown, and Mason Gooding) gather together to debate the “rules” for surviving this latest slaughter and calculate each of their respective odds.

As a franchise, Scream is fairly unique. Unlike the slashers that spawned it, there is no central killer; the identity of “Ghostface” varies from film to film, and often scene to scene. Instead, the true star of the series is its voice: hyperliterate, model-pretty teens bantering about movie minutiae while trying to avoid winding up at the end of a knife. The series lives and dies (so to speak) by this delicate balance of gory horror and glib humor, and I was worried going in that the filmmakers would either lean too hard in one direction (the unearned nostalgia of Ghostbusters: Afterlife) or the other (the broad Scooby Doo antics of Scream 3). But the producers have found good stewards in Matt Bettinelli-Olpin and Tyler Gillett, the directors of 2019’s delightful good-for-her horror comedy Ready or Not. The duo, known collectively as Radio Silence, are clearly fans of the series: they manage to successfully capture both Craven’s lean, brutal suspense and Williamson’s gabby, smartypants dialogue. I went in with my guard up, but I knew within minutes I was in good hands.

The Scream series is at its best when it serves as a commentary on the state of horror cinema. The original, of course, was lightning in a bottle, a fast and funny critique of the ‘80s-’90s slasher cycle. The quickly produced 2 and 3 were amply entertaining, but suffered from the fact that not enough time had elapsed for the genre to provide Craven and Williamson with new material; 4, to me anyway, was a return to form, skewering the 2010s’ vogue for horror remakes. The decade since has provided the Radio Silence team with a bumper crop of horror to riff on: in their crosshairs are elevated horror (Tara snobbishly prefers The Babadook to Halloween), the current trend of “requels” (or “legacy-quels”– “The fandom is divided on the terminology,” says this film’s Randy analogue), and the endless feedback loop of toxic fandom. Radio Silence clearly understands that a good Scream movie is not simply a horror movie, but a critique of the genre itself.

Yet much of Scream’s appeal also lies in its characters, who, almost in spite of the series’ modus operandi, have grown to be genuinely beloved icons. Of the returning characters (which, in addition to the Big Three, also include 3’s Heather Matarazzo and 4’s Marley Shelton), the best here is probably Arquette, who convincingly pivot’s the original’s boyish comic-relief lawman into a grizzled, trauma-stricken loner (one character mockingly refers to him as “shitty Sam Elliott”). Cox is given less to do, but her catty Gail Weathers is as essential an element of Scream’s appeal as Ghostface. Both of their performances are informed by the audience’s familiarity with their relationship (onscreen and off), and it’s a pleasure to see them again.

Then, of course, there’s Campbell’s Sidney Prescott. More than any of the preceding films, this Scream isn’t really Sidney’s story (she doesn’t enter the action in earnest until the third act), but, as always, she is the fulcrum around which the film’s events ultimately pivot. Unlike Jamie Lee Curtis’ hardened latter-day Laurie Strode, who has lived the days since that fateful Halloween in a constant state of readiness, the Sidney we see here seems to have accepted the fact that, every few years, she will be drawn back to Woodsboro to stop yet another killing spree by yet another horror junkie (when Dewey asks her if she has a gun, she matter-of-factly responds, “I’m Sidney fucking Prescott, of course I have a gun.”). Sidney has been the protagonist of a horror movie for her entire adult life, and has had ample time to familiarize herself with its rules.

Will the new Scream hold any appeal to those not already in love with the series? Probably not; those ensconced in the contemporary horror community might easily forget that the series has long been one of the genre’s most divisive (as a kid getting into horror in its immediate aftermath, I can attest that it was difficult not to hold a grudge against its influence), and it is such a tonal match for its predecessors that, if you’re not already converted, you’re not going to be won over this time around. What’s more, even fans might quibble that this film’s “requel” conceit covers too similar ground to Scream 4’s meditation on reboots. And while I obviously can’t expand upon this without treading into spoiler territory, I feel I should mention that I spotted a killer within minutes of their introduction; I don’t walk into a Scream film for the whodunnit element, but those who do may find themselves disappointed.

But a lack of surprises can scarcely count as a demerit in a Scream sequel. The series has always run on just as much of a “very simple formula” as the movies in Randy Meeks’ video rental cart: the cold-open phone call, the meta in-jokes, the third-act exegesis in which the blood-soaked killers lay out the film’s central thesis. In an ideal world, we would get a new Scream once per decade, applying its format as a sort of State of the Genre address (one would imagine a mid-2000s entry would have turned its eye on torture porn and the post-9/11 cultural identity, or perhaps on Scream’s own inescapable legacy via the in-universe Stab series). Bettinelli-Olpin and Gillett know that the formula is the star, and expertly deploy it toward the contemporary horror landscape. Somewhere, Randy Meeks is smiling.

* – This has been a point of contention among fan circles since it was announced, as if there was ever going to be a universe in which this film didn’t include a scene of characters complaining about how lame it is when a sequel just reuses the title of the original.