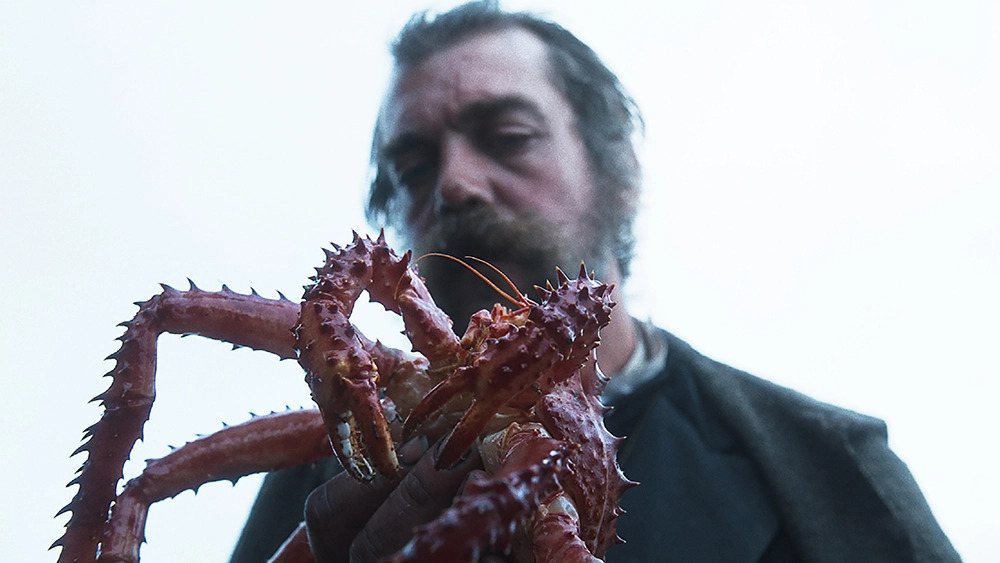 In The Tale of King Crab, Matteo Zoppis and Alessio Rigo de Righi present two variations on a familiar theme. The Italian directors have long been interested in the peculiarities of oral storytelling, and their latest work rounds out a trilogy of films about truth, history, and legend. All three installments originate in Vejano, a village near Rome, and employ local hunters as narrators, with varying degrees of authorial input. Belva Nera (2013) is a short documentary about panther sightings in the village; Il Solengo (2015) is a feature-length character study of a local eccentric; and The Tale of King Crab (2021) is a fictional rendering of another piece of village lore: the story of Luciano (Gabriele Silli), a rebellious outsider in 19th century Vejano. The first half of the film follows Luciano’s half-baked crusade against the town’s ruling prince, a scheme that abruptly ends when he mistakenly kills his love (Maria Alexandra Lungu). The second half unfolds across the world in Tierra del Fuego, where Luciano is in exile, hunting for a treasure that may or may not exist.

Belva Nera and Il Solengo rely on decentralized narration. The hunters of Vejano become a wry inversion of a Greek chorus; their conflicting accounts — assembled from memory, hearsay, and embellishment — combine into a misshapen narrative that reveals more about the speakers than their ostensible subject. (Conspicuously, the local narrators are exclusively male. How do women contribute to the region’s rich oral history, one wonders? The films sadly provide no answer.) Some of the men we meet in these films reappear in The Tale of King Crab, gathered once again in their hunting lodge to debate the details of another story. Yet by straying from a nonfiction approach, Zoppis and Rigo de Righi make a significant departure from their other films. The documentaries deconstruct a legend, and The Tale of King Crab builds one.

While the first two films rejoice in the characters’ inconsistent perspectives, The Tale of King Crab creates a cohesive narrative from the hunter’s stray knowledge of Luciano. A smoothly edited intro shows the men sharing fragments of his story, before shuttling us back in time to where our hero’s journey begins. Here, the directors fill in the blanks with their own imaginations. What emerges is a piece of speculative history, a hypothesis for what these oral tales could represent. For some reason, Luciano’s adventures have persisted in the local consciousness for over a hundred years, and the filmmakers offer them up to us to contemplate how and why.

The film’s first chapter hews closely to what could have been, informed by the hunters’ stories and various Italian folk songs that inflect the narrative. But once we rejoin Luciano in South America, the movie can no longer depend on these signposts; no one in Italy knows what happened after Luciano left. And so, the second part of the film has a wilder quality. Leaning on Tierra del Fuego’s regional lore and their own extrapolations, Zoppis and Rigo de Righi spin a strange, surprising string of events. If part one explores an author’s power to control and shape a story, part two concerns a story’s power to manipulate its listener. As we follow Luciano’s pursuit of a dubious treasure, his blind adherence to myth precipitates his downfall.

The Tale of King Crab is best appreciated in the context of Zoppis and Rigo de Righi’s broader work. Taken as a whole, the trilogy expresses a beautiful conversation between documentary and fiction, the directors leveraging both forms to mine complementary elements of their thematic interests. In isolation, however, the movie may not play quite as well. It doesn’t truly succeed as a tragic romance, nor as an epic adventure — but does it need to? The film’s worth lies more in its formal quirks and conceptual provocations. To grasp those nuances, curious viewers may need to return to Belva Nera and Il Solengo, where Zoppis and Rigo de Righi’s fascination with the legends of Vejano began.