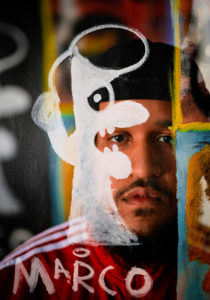 How did Ruben D. Feliz start his journey to becoming an artist? It might have been divine intervention.

“During the pandemic I started doing tarot readings, and my first (client’s) payment to me was a canvas, a brush and some paint,” he remembered.

While these fortune-telling cards may have brought him his first painting equipment, he might never have put them to use if it wasn’t for a documentary on Jean-Michel Basquiat he had viewed the night before.

“The documentary of Basquiat was called ‘Boom For Real’ and it had just inspired me; I’m like, ‘Wow, this man was amazing,’” Feliz added, but noted that he wrote the occurrences off as coincidence at the time. “But slowly, I kept finding myself wanting to paint more or grabbing a brush. It just happened to be a thing all of a sudden ― it happened really fast.”

Guided by Basquiat and a love of tarot and astrology, the Lynn native embraced fate and fell headfirst into painting. As his practice has deepened, his artistic eye has begun to wander.

“Basquiat is the roots, right? But a tree has many roots,” he said. “I’ve been into a lot of abstract realism and I immerse myself in learning who came before me. I think that’s fairly important not just for inspiration, but for history ― to see how art has been shaping and how I want to shape it going forward.”

Feliz, whose earnest excitement clashes somewhat with the intense candor of his paintings, is already dreaming about what’s next. Maybe fate will once again play a role in his success, or maybe it’ll just be him. Feliz’s canvases ― suffused with Basquiat’s thick slashes of color, primordial figures, and laughing rage ― has most recently been featured in “Past and Present: Black Art and Artists,” a four-week exhibition of local Black artists at Galleries at Lynn Arts (GALA).

“After my first show I was like ‘Yeah, this is my space,’” Feliz recalled. “I talked to so many people, and the conversations we were having weren’t really about art; they were about our lives. It was just connecting.”

As part of the show, each of the four featured artists were asked to present the art of a historical Black artist whose work would be shown beside their own. Feliz, of course, chose his patron saint Jean-Michel Basquiat.

While it’s clear that the Neo-Expressionist Basquiat ― who defined the 1980s New York art scene with his frenzied, emotive works ― is Feliz’s primary influence, the young Lynner’s artwork differ from his predecessor in some crucial ways: namely, his incorporation of street art-inflected elements (think graffiti tags, acid-trip Looney Toons characters) and his informed understanding of mental health and emotional frailty.

“I’m very out there; a lot of my paintings, you’ll see words like ‘depression’ or you’ll catch quotes of what I’m feeling during my moments of anxiety or heartbreak,” he explained. “I just want to invoke a mirror moment. When they look at my paintings, I want them to see it’s a reflection of who I am. I’m not saying that that’s what makes me different, but I feel like that approach is more mental-health centered, and more spiritually centered.” 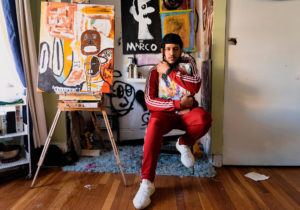 “Whatever emotion it is, whatever aspect of myself is trying to speak, I go in there ― I’d rather have it on a canvas than come out in the real world,” he continued. “There’s a lot of pain, a lot of feelings, but most importantly, I think, a lot of freedom and joy. I feel really great about my work being presented in the gallery where people affirm it, resonate with it, and see the story I’m trying to tell. My anger could tell a story for you, you know what I’m saying?”

Feliz understands the healing power of emotional expression ― through art or otherwise ― and he doesn’t want to keep this understanding all to himself.

When not painting, the artist helms a nonprofit called The Healing Circle Foundation, which gives him an opportunity to practice what he preaches regarding the benefits of mental-health awareness.

“The Healing Circle is a foundation to help pay for people’s mental-health resources or just raise awareness about mental health,” he explained, adding that through his foundation he’s been able to pay for copays, therapy bills, and other forms of mental-health care.

“I also created something on the side called The Do-It-Yourself Experience,” he added. “I hope to soon host workshops and community groups, not just for adults, and I also want to start doing it for kids, teaching them arts and crafts, how to make a candle, how to make abstract art.”

Feliz’s enthusiasm for the transformative power of art comes from many places: his emotional struggles, his dreams for healing the world, and the contours of his own identity. Being a participant in “Past and Present,” he said, has brought into relief the duality that exists for creators of color – like Basquiat and himself – in the art world.

“Being Black, being Hispanic and having this medium as a form of expression is a positive thing, but obviously there’s a downside to that, right? There’s fewer opportunities, if we’re being real,” he said, but was quick to add: “Being a Black man affects my art in a positive way. I think art is a great opportunity for every Black man to tell a story. Not just a story, but our story.”

Keep up with Ruben Feliz on Instagram @rubendfeliz. The artist’s work (which now includes housewares like candles and sculptures) is available for purchase at https://www.rubencreates.com/shop.

This story has been adapted from a version that ran in the Daily Item on Feb. 23 .